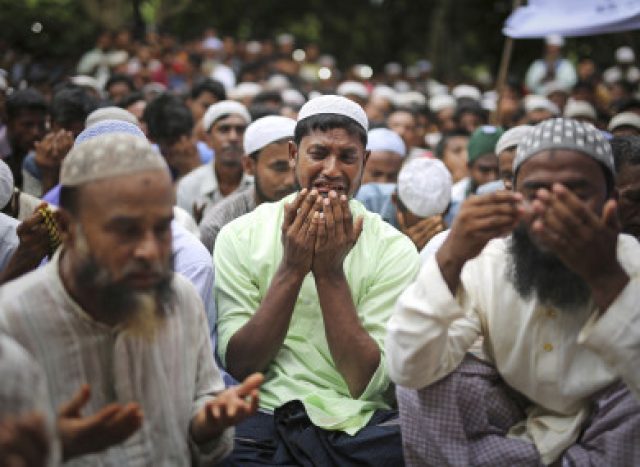 According to United Nations Chief Antonio Guterres’ report, Myanmar’s armed forces are placed on the list of “credibly suspected” government organizations and rebels groups forcommitting sexual violence against people. The purpose of the report is to assist United Nations Security Council in assessing the overall global situation, which focuses on governments and other factions involved in sexual crimes.

Rohingya Muslims, who managed to flee from persecution in Myanmar, are currently residing in Bangladesh, were the sources of data are based on which the report is compiled. According to the report Myanmar’s army along with the Buddhist extremist group, which was involved in the “ethnic cleansing”, carried out mass rapes and the sexual exploitation of Rohingya women.

Noble laureates across the world including Malala Yousafzai criticized Aung San Suu Kyi for the atrocities being committed under her premiership as it was against the spirit for which she was awarded Nobel Prize; in the peace category.

The report came at a time when the current Government in Myanmar claims to have taken control of law and order situation in the country, encouraging fled Rohingyas to return. As per Myanmar’s state News agency, the process of repatriation has started as the first Rohingya family has returned on 15th April, 2018. There are as many as 0.7 million Rohingya Muslims displaced due toan operation commenced by Myanmar government and armed Buddhist militia. A portion of migrants has moved to gulf and Malaysia, however,the majority took refuge in neighboring Bangladesh.

The situation for Rohingya went from bad to worse when Bangladesh decided to seal its border with Myanmar and refused to take any more refugees. They alleged that it was not feasible for their country’s fragile economy. Countries like Turkey and United Nations, in general, provided food and means of subsistence to aid the victimized community but given the size of the population, it was still inadequate.

Both Myanmar and Bangladesh agreed for the return of Rohingya refugees to their homes in Myanmar, but the process has been a subject of continuous delay with both sides blaming each other for incompetence. The family which arrived at one of the specially built reception centers by Myanmar government, embarking the apparent return of Rohingya refugees, was living on the “No Man’s Land” at Myanmar-Bangladesh border, said Bangladesh’s refugee commissioner Mohammed AbulKalam.

According to the report Myanmar’s army along with the Buddhist extremist group, which was involved in the “ethnic cleansing”, carried out mass rapes and the sexual exploitation of Rohingya women.

It implies that the understanding between two neighborswith respect to Rohingya is yet to take effect as Dhaka has no role in the return of first Rohingya family back to Myanmar. International welfare organizations and human rights groups have raised concernsover the safety of Rohingyas upon their return.The narrative which led to ethnic persecution earlier is still prevalent and culprits involved in the cruelty before have not been brought to justice either.

Just a day before Myanmar’s announcement of the Rohingya family’s arrival, the UN refugee agency warned that conditions in Myanmar were “not yet conducive for returns to be safe, dignified, and sustainable”. “Refugees in Bangladesh have said that before considering a return to Myanmar, they would need to see concrete progress in relation to their legal status and citizenship, security, and their ability to enjoy basic rights at home in Rakhine State,” the agency said.

As far as the authenticity of the people, shown by state media and said to be a Rohingya family, is yet to be confirmed. It is hard to understand as to why a group who was subjected to ethnic cleansing just a few months back would like to go back to the same ordeal they managed to barely escape. Rohingyas are stateless and have been rejected by Myanmar as well as Bangladesh, a place they are historically enrooted to. Graphics and footages coming from Myanmar show a degree of brutality which world had never seen before.

Noble peace prize winner Prime Minister Aung San Suu Kyi and her government faced a worldwide condemnation for letting such gruesome actions take place under its watch. Noble laureates across the world including Malala Yousafzai criticized Aung San Suu Kyi for the atrocities being committed under her premiership as it was against the spirit for which she was awarded Nobel Prize; in the peace category.

In the photos released by Myanmar Government, it was deemed as a “Muslim family” receiving National Verification card, instead of a Rohingya family. However, the card does not grant citizenship to Rohingya people, resultantly being rejected by Rohingya leaders based in Bangladesh refugee camps.

US is sole superpower due to Pakistan’s positive role in the region: DG ISPR