Under trial to exert pressure on Nawaz, alleges Maryam 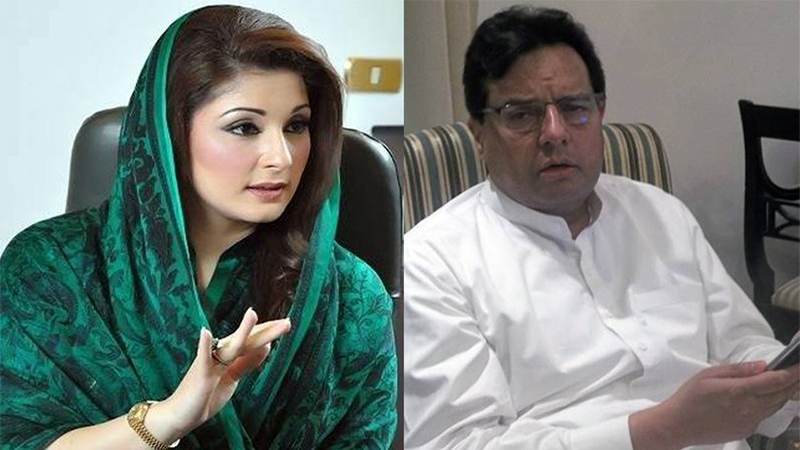 Former Prime Minister Nawaz Sharif’s daughter, Maryam Nawaz, on Tuesday, said she and her father [Nawaz Sharif] have been dragged into fake corruption cases in the accountability court to exert pressure and oust them from politics.

The objective of the presser was to read out one of the answers [out of the 127-questions] asked in in the accountability court, according to Maryam.

Following her father’s footsteps, she read some of the statements from paper.

In first part of her answer, She said, “despite not figuring anywhere in the Supreme Court judgment dated April 20, 2017, the reason I was dragged into the case finds its origin in ‘will teach a lesson’ mindset that has threatened, harassed and victimized those who refuse to accept the excesses, those who had the courage to stand up to injustice and those who have dared to question the rotten, entrenched practice of bringing elected prime ministers to their knees, on one pretext or the other, be it religion, corruption or even ghaddari.”

She continued that “defiling them, disgracing them, harassing them, and pressurizing them into submission should they attempt to exercise or exert the authority conferred upon them by the Constitution of Islamic Republic of Pakistan.”

Read more: Is Maryam Nawaz really not involved in Politics?

After this statement, she switched on to Urdu to explain those who could not comprehend English.

She claimed that “despite the presence of all the documentary evidence, which is now even presented in accountability court, I was not even named in the first judgment of the Supreme Court. What happened all of sudden that I was included in the JIT’s investigation?”, she inquired.

I was called and cases were registered against me.

She explicitly blamed the above-mentioned mind-set for dragging her into cases to harass and threaten her father.

In the second part of her statement, which she read out in court yesterday [Monday], she said, “like her father, she knows why she was framed in the accountability court cases. I know, why I had to present myself in front of [Watsapp] JIT for hours.”

She continued that she had to appear before this court more than 70-times and was kept away from ailing mother. Because her only crime was that she was the daughter of brave Nawaz Sharif. She heaped praise on her father for his bravery at time of adversities and atrocities.

“The perpetrators of this case think that by dragging me into cases Nawaz will bow down under pressure. But they neither know Nawaz nor his daughter” she remarked.

“Maryam is not a weakness but strength of her father and won’t let her father’s head bow down, “she added.

Speaking of Nawaz’s decision to take up the flag against the 70-years disease which plagued this country, she said Nawaz is fighting for the democracy, to protect the right to vote and for the welfare of Pakistan.

Finally, responding to the actual cases Maryam denied being the beneficial owner of offshore companies Nielsen and Nescoll and London flats.

She claimed that she never took any financial advantage from these companies.

She alienated herself from 25% shares of Gulf Steel Mills, Al-Taufiq case and said that the Capital FZE documents don’t concern her.

The letters which are used as evidence against me are suspicious, irrelevant and cannot be made a record of the court, she remarked.

She questioned the malafide intention on the part of the JIT and stressed that the cases are fabricated to implicate her.

The basic idea behind this media engagement was to gain political leverage. The impression was given that she was able to respond to the 127-questions in the accountability court pertaining to the Avenfield reference. But apparently, she did not respond at all to the actual accusations in the court.

She emulated her father and repeated the same procedure as him to read put the part of her court statement in public.

It was a repetitive exercise in front of the media to reach out to masses playing the victim card. Because, after all, she did not record the money trail, but a political narrative citing vengeance against ‘house of Nawaz’.

PSL 3 to start in February with Karachi hosting the final

Authorities look to revive past glory of Lahore