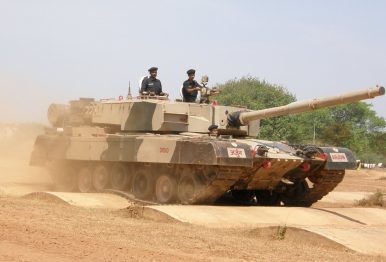 The Indian Army’s latest iteration of its doctrine, Land Warfare Doctrine (2018), had a soft launch on December 14th of last year, being placed on the army’s website with merely a link provided on the news page—and without a release, event presided over by its normally loquacious chief. As a result, even vigilant defense watchers missed it, only to catch up about a week later.

The surreptitious nature of the document’s placement was enhanced by the lack of mention of the document when four studies previously ordered by the army chief were discussed at the Army Commanders’ Conference in October. There had also been no reference to the document by the army leadership, including in the run-up to the Army Day when the chief customarily dilates on the significant milestones crossed and up ahead.

The next government would do well to put out a strategic review early in its tenure so as to provide the three services a starting point when it comes to doctrine-making.

Further, the mention of the doctrine was removed from the media release web pages and the document moved to a nondescript corner of the knowledge pages of the army website in early February. This begs the question of why. This article argues that the army had reasons for its reticence. While its views on the contents of the LWD have been known for about a decade now, this is the first time these ideas have been officially documented.

Since the views have been controversial and lacking consensus both vertically (with its civilian overseers) and horizontally (with sister services), it appears that the Indian Army has indulged in a unilateral exercise of agenda setting. Through the LWD, it attempted to preempt the strategic review being undertaken at the governmental level and privilege its own operational preferences over the priorities of all the services.

Read more: The Doctrine of Information War and Global Dynamics

Being Straightforward on the LWD

From a surface-level analysis, there appears little reason for the army to have played coy over the document. The Indian Army could have argued that the doctrine aligns with broader jointness efforts in the Armed Forces, as a service doctrine is a reasonable and logical corollary to the joint doctrine. The second edition of the Joint Doctrine of the Indian Armed Forces (JDIAF), released in April 2017, was intended to underpin service-specific strategies. Taking a cue, the Land Warfare Doctrine (LWD) has on its cover the requirement that it needs to be read in conjunction with the JDIAF.

Additionally, the army could argue that it has in fact been transparent. The army chief had at the outset of his tenure acknowledged the existence of the Cold Start Doctrine and had indicated he would operationalize so-called Integrated Battle Groups (IBGs). The Cold Start Doctrine, introduced in the Indian Army Doctrine (2004), envisages a quick launch of multiple limited offensives by Integrated Battle Groups into Pakistani territory. He had let on last year that the army’s Perspective Planning Directorate had been put to producing its doctrine.

Placing the Doctrine in Context

Despite these possible rationalizations, the doctrine runs afoul of democratic civil-military relations. In India, grand strategy is a civilian function, and not one appropriated by the army as attempted in this document. The contents of the doctrine suggest that the army has gone beyond its remit. One of these problematic tenets is the two-front war thesis, a concept the army has championed for a decade now.

The mention of the doctrine was removed from the media release web pages and the document moved to a nondescript corner of the knowledge pages of the army website in early February.

The concept of a two-front war against India’s two primary adversaries, Pakistan and China, first found mention at a closed-door conference at the end of 2009 in the review of the army’s first attempt at doctrine-making, the 2004 Indian Army Doctrine (IAD). The LWD refers to this as a “multi-front environment” involving an external collusive threat from Pakistan and China coupled with a hybrid (defined in the LWD as, “a blend of conventional and unconventional, with the focus, increasingly shifting to multi-domain Warfare varying from non-contact to contact warfare”) and state-sponsored proxy war.

The doctrine has gone further than envisaging a two-front war.  Whereas the LWD calls for deterrence by denial against China based on multi-tiered defenses and strike forces suitably poised, it wishes to enhance deterrence by punishment against Pakistan by launching swift offensives to take out Pakistan’s center of gravity—its military—and secure “spatial gains” in the event of war. It is uncertain how this expansive aim can be achieved by limited war aims.

Against a collusive threat, it argues for a “strategic defensive balance” on the secondary front, while the primary front is being dealt with. Without explicitly mentioning it, it appears to designate the western front at the primary front. Arguably, this is the domain of wartime strategy if and when a two-front war scenario comes to a pass, and not one of doctrine. In bringing out the document, the army has preempted the expected output of the Defense Planning Committee (DPC).

The DPC is a high-powered committee set up last April under the National Security Adviser with a mandate to produce an overarching strategic review document. Rumor has it that the strategic review is to be released soon. Since the JDIAF has no mention of a requirement to prepare for a two-front war, the army ought to wait for the government’s cue through its strategic review, rather than attempting to preempt its content or publicly influence its perspectives bottom-up.

In India, grand strategy is a civilian function, and not one appropriated by the army as attempted in this document.

Further, the attempt to influence the DPC’s strategic review publicly is contrary to the best practices in democratic civil-military relations. The JDIAF accords precedence to a national security strategy over the doctrine of the armed forces, which is itself then followed by service-specific doctrines. By pitching its contents at a higher-than service level, the LWD risks trespassing on the turf of its two superior doctrines.

Read more: What is hybrid warfare?

The LWD does little to contribute to jointness efforts across the armed services. The JDIAF had focused on jointness, which it defined as the creation of synergy across services in order to enhance operational success, optimize costs, and maximize readiness. In the past, the Indian military has not taken measures to improve or achieve jointness due to inter-service debates over the relative importance of the army, navy, and air force in confronting India’s threat landscape.

The army chief had sounded the bugle early on in his tenure, asserting the primacy of land operations in the conduct of war and its outcome. The articulation of the Cold Start Doctrine in the IAD along with the army’s intent to operationalize IBGs after test-bed exercises this summer has once again propelled land operations to the forefront of India’s preparations for warfighting. This will, however, have implications for India’s ability to prevail in its expansionist war aims, particularly in a situation of constrained defense budgets.

The only way to deliver a body blow to Pakistan’s military would be with the support of the Indian Air Force (IAF), which means that the IAF needs to be on-board—of which there is no evidence. Recall here that one of the criticisms of the 2004 IAD was that it did not have the backing of the IAF. Since the army brass has itself not expanded on the LWD in any detail at all since its release, there has been no comment from the air force also on its implications for air power. The IAF, similarly handicapped by a reduced defense budget, would be loath to be diverted from its preference for a strategic role for air power in war.

The JDIAF accords precedence to a national security strategy over the doctrine of the armed forces, which is itself then followed by service-specific doctrines.

Therefore, it is uncertain whether and to the extent the air force reservations faced by CSD have been sorted out.  It remains to be seen if the JDIAF has put the three sister services on the same page such that the LWD has the IAF’s concurrence. The doctrine also does not dwell on conflict termination besides tritely observing that politico-military objectives will be met when the war ends, whereas the overarching JDIAF had focused more on conflict termination.

The crucial question that remains unanswered in the LWD is how in a nuclear environment escalation can be avoided if the intent is the destruction of the adversary’s military strength. Absent a national security strategy paper and a Chief of Defense Staff equivalent appointment, such as the Permanent Chairman of the Chiefs of Staff Committee, who can serve as the conductor of a joint inter-service preparation and prosecution of the war, the Indian Army has in bringing out a service-specific doctrine chosen to bell the cat.

In doing so, it has tread on prospective contents of a national security strategy without elaborating on war limitation in the nuclear context of the next war. The next government would do well to put out a strategic review early in its tenure so as to provide the three services a starting point when it comes to doctrine-making.

The strategic review should also dilate on the nuclear level, so as to give the downstream doctrines—joint and service-specific—the guidelines on including a section on limitations in objectives and methods in future iterations of doctrine. Having a doctrine deal only with sub-conventional and conventional levels, as the LWD limits itself, amounts to a denial that South Asia is in the nuclear age.

Ali Ahmed is a freelance blogger from India, where he has variously been an infantryman, an academic, and an international civil servant. A version of this piece originally appeared at South Asian Voices, an online platform for strategic analysis and debate hosted by the Stimson Center (www.southasianvoices.org) and has been republished with permission. The views expressed in this article are author’s own and do not necessarily reflect the editorial policy of Global Village Space.