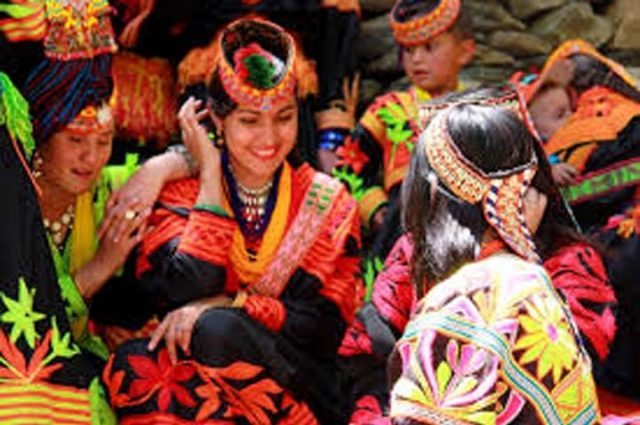 The United Nations Education, Scientific, and Cultural Organization (UNESCO) have approved Suri Jagek practice of indigenous Kalash culture to be included into this year’s list of ‘Intangible Culture Heritage’ that emerged on Wednesday.

The nomination was forwarded by UNESCO’s Inter-governmental Committee for Safeguarding the Intangible Cultural Heritage during the 13th session being held in Port Louis, Mauritius. The list of 2018 also includes cultural heritage in Kenya, Cambodia, Egypt, Syria, and Azerbaijan.

The committee discussed the threats to the existent cultural heritage and stressed upon the swift plans required to safeguard them. The committee also approved the 2018 list of ‘Intangible Cultural Heritage’ that demands immediate measures of protection.

Read more: All about culture and art: Faiz International Festival ends in Lahore

The UNESCO committee accepted Pakistan’s nomination that “as a ruling custom, integral to the formation of the traditional lunisolar calendar dictating times for festivals, feasts and social events, as well as animal husbandry and agriculture of the Kalasha and Muslim community residing in the three valleys, consider Suri Jagek to be an integral part of their Intangible Cultural Heritage”.

“A first exclusive inscription for 2003 Convention for Pakistan — the other two being Nauroz and Falconry shared with neighbour countries in the region — Suri Jagek (literally, observing the sun) is a Kalasha meteorological and astronomical practice carried out in December on the winter solstice and is based on the observation of the sun, moon, and stars in reference to the local topography,” the local media report stated.

Suri Jagek is the local meteorological and astronomical practices based on observation of the sun, moon, and stars in reference to the local topography.  It was the element of indigenous Kalasha knowledge of nature and universe. This practice plays an important role in observing the local social customs, festival, feasts, rituals, animal husbandry and farming practices.

However, the practice of Suri Jagek is under threat due to the increased construction in the valley. The constructions in many villages of the valley obstruct the view of sunrise tall trees causes visual impairment.

The enlisting of Suri Jagek in the ‘Intangible Cultural Heritage’ list aims to revive the practice in the valley and also to make the young generation familiar regarding the cultural significance and utilitarian benefits associated with the ancient tradition of Suri Jagek. Since the people of the community have complained about the school curriculum to be alienated from their own culture.

Benazir Bhutto: A Phoenix that rose from Ashes