A partial new US-China trade agreement will be signed on 15th January, US President Donald Trump said Tuesday, announcing that he will also then travel to China for continued talks. The trade war between the world's two largest economies has not only impacted business confidence and trade in their own regions but has trickled down to stifle economic progress elsewhere. 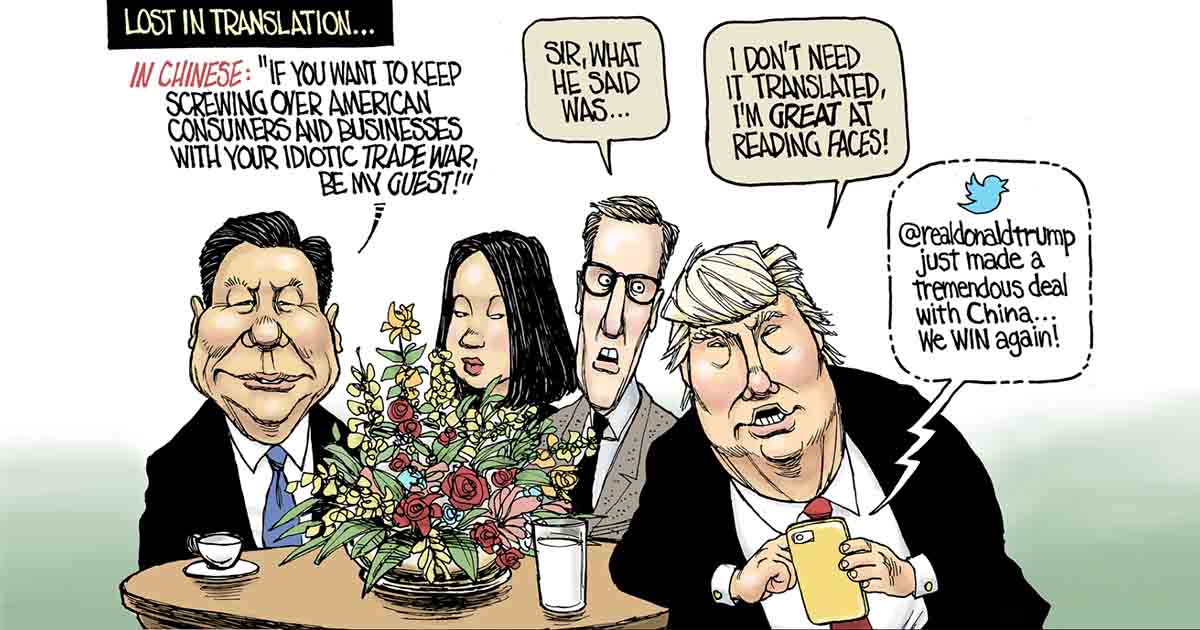 A partial new US-China trade agreement will be signed in the middle of this month, US President Donald Trump said Tuesday, announcing that he will also then travel to China for continued talks.

Trump’s tweet, sent moments before Wall Street opened for the year’s final trading day, set a calendar date for an event that had hung in uncertainty in recent weeks as details remained scant.

US President Trump says he's going to sign a "phase one" #tradedeal with China. https://t.co/IqPJH6QGaE pic.twitter.com/Yi43OSCvWK

The text has yet to be made public pending what US officials say is a largely technical review. “I will be signing our very large and comprehensive Phase One Trade Deal with China on January 15,” Trump tweeted.

“The ceremony will take place at the White House. High level representatives of China will be present.”

US and Chinese officials have said the agreement includes protections for intellectual property, food and farm goods, financial services and foreign exchange, and a provision for dispute resolution.

Under the new deal, China has committed to a minimum of $200 billion in increased purchases over the next two years from US manufacturers, farmers, energy producers and service providers, according to US Trade Representative Robert Lighthizer.

“They have agreed to many structural changes and massive purchases of Agricultural Product, Energy, and Manufactured Goods, plus much more.”

President Trump will sign the “Phase One” #TradeDeal with #China in January 2020, he announced on Dec. 31. https://t.co/jkkzTZo6V0

On to Phase Two?

Trump said Tuesday he will travel to Beijing to continue negotiations “at a later date” — showing willingness to pursue talks that have acrimoniously broken down more than once and left both sides to salvage a partial deal.

While the detente put a stop to further deterioration in the trade war, it leaves many of the barriers erected so far in place.

Trump canceled plans to impose tariffs on $160 billion in Chinese merchandise in mid-December — including hot consumer items like mobile phones — but punishing US tariffs remain for about $250 billion in Chinese-made goods, including machinery and many electronic items.

Word of the truce has driven a Wall Street rally this month and US stocks on Tuesday closed out the year with their best annual performances since 2013. The two economic powers have been locked in a bruising trade war since the first half of 2018 that has roiled the global economy and helped send the manufacturing sector into decline.

Observers say that in that time, the trade war may have ushered in a long-term de-coupling of trade relations between the world’s two largest economies. Americans have cut merchandise purchases from China substantially so far this year, while their appetite for Mexican goods has grown.

The yawning US goods deficit with China fell 14.7 percent in the 10 months through October of 2019 but rose 29 percent with Mexico, according to official US figures. What the two sides can accomplish in a potentially thornier “phase two” of negotiations — which could touch on Beijing’s sweeping market interventions and industrial subsidies — remains unclear.

Trump has repeatedly claimed the trade war’s burden fell squarely on China, while sparing the American economy. Economists say both sides have suffered. But the United States appears to have emerged from an earlier recession scare as Beijing has moved to reverse a worrisome slowdown.

Still, some economists and trade experts say Phase One was largely a victory for Beijing.

Scott Paul, president of the Alliance for American Manufacturing, which has largely favored Trump’s aggressive trade posture with China, said earlier that agreeing to remove tariffs amounted to “giving away much of our leverage, while kicking the can down the road on the most meaningful trade issues with China.”

.@realDonaldTrump is delivering for America’s farmers:

“China’s imports of soybeans surged in November following the announcement of an interim trade deal with the United States. Imports rose 53.7% over a year earlier to 5.4 million tons…”https://t.co/jEg2wv3Jbb

Peter Navarro, White House director of trade and manufacturing policy, told CNBC on Tuesday that the Phase One agreement was only one plank in the Trump trade agenda, which encompasses other newly negotiated agreements in North America and Asia.

“Next year… we’re going to try to get something going with Great Britain, Vietnam, Europe and anybody else who wants to fairly trade with the United States,” he said.

what traders haven’t even begun to price in is the longer term, structural impact of this decoupling and its particular danger to individual companies.

The escalating trade war between the U.S. and China is rippling through the global economy, hurting confidence among U.S. small businesses, crimping trade among industrial giants in Asia and hitting export-oriented factories in Europe.

Economic confidence among small U.S. companies fell in August to the lowest level since November 2012, according to a monthly survey of more than 670 small companies conducted for The Wall Street Journal. The portion of respondents that expect the economy to worsen over the next 12 months rose to 40%, compared with 29% in July and 23% a year ago.

The worst Singapore industrial production since 2010 contrasted with the improving outlook in global PMIs on US-China trade deal bets. That may come back to bite the $SGD. Get your market update from @ddubrovskyFX here: https://t.co/1SbwWsYhJB pic.twitter.com/WJoBj8lAC6

Both Japan and South Korea have said the tariff impact is particularly pronounced in high-tech parts and materials purchased by factories in China, such as Japanese auto parts and South Korean semiconductors. The Chinese factories use those products to manufacture finished goods, some of which are exported to the U.S.

The most knowing delegates at this year’s World Energy Congress continued to worry about the US-Chinese trade war. It has slowed growth and placed the biggest drag on oil prices. At the same time, however, they were shifting focus to the more momentous and generational event of decoupling.

They saw it in the Liquified Natural Gas contracts that the world’s fastest growing LNG exporter, the United States, wasn’t signing with the world’s fastest growing importer, China. They recognized it in the recent Chinese deal to take an equity stake in Russia’s Arctic LNG 2 project taken by China National Petroleum Corp (CNPC) and China National Offshore Oil Corp (CNOOC).

The tit-for-tat tariffs and accompanying Trump tweets have been driving markets all year, but what traders haven’t even begun to price in is the longer term, structural impact of this decoupling and its particular danger to individual companies.

Previous articleBangladesh suspends mobile services for 3 days along Indian border, in the aftermath of the draconian Anti-Muslim CAA bill in India
Next articleIran fights to push US out of Iraq

26 July 2021
Previous articleBangladesh suspends mobile services for 3 days along Indian border, in the aftermath of the draconian Anti-Muslim CAA bill in India
Next articleIran fights to push US out of Iraq

Saudi ‘not consulted’ over US strike on Soleimani

Is TLP a political “Cryptocurrency”?