"Kashmir, Khalistan Referendum Front" filed a petition in the court of Texas, Houston against Indian Prime Minister Narendra Modi for atrocities in Kashmir and against Sikhs in India. Modi, Amit Shah and General Dhillon, Commander of Indian forces in occupied Jammu & Kashmir have been summoned. 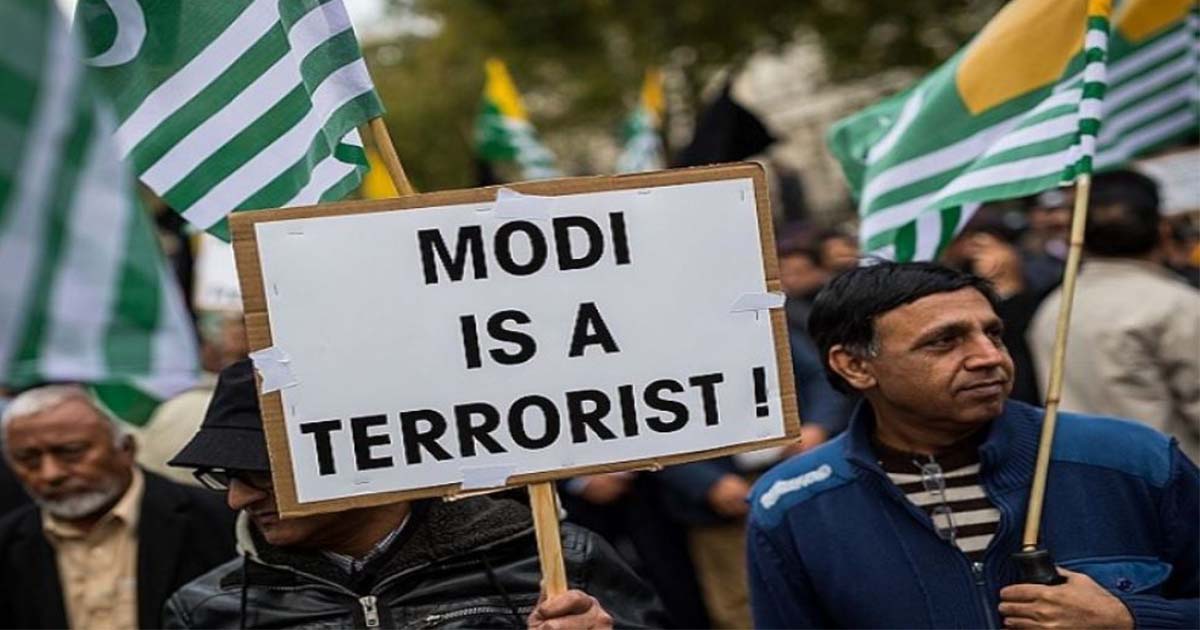 A US Court has issued summons to Indian Prime Minister Narendra Modi, Amit Shah, Indian Interior Minister and General Dhillon, Commander of Indian forces in the occupied state of Jammu & Kashmir over Modi government’s brutal crack down of Kashmiri population of almost 8 million and alarming human rights violations in Kashmir. Almost 8 million population has been under curfew, generalised lock down and communication black out out since Modi regime knocked down the autonomous status of the state through a hastily forced controversial legislation from Delhi.

2 Days Before #HowdiModi, a Court in Houston, USA issues summons to Modi & Shah on the basis of class action lawsuit for human rights violations in #Kashmir. #AdiosModi pic.twitter.com/FMQWZziDPR

The petition was filed by two Kashmiri citizens under the name of their organization the “Kashmir Khalistan Referendum Front” in the District Court of Houston Division in the state of Texas. It has also nominated Modi’s Minster of Interior Amit Shah (or Home Minister, as it is called in India) who spearheaded the legislation scrapping Kashmir’s special status in the Indian parliament. The head of India’s military force in Kashmir Lt. General Kanwal Jeet Singh Dhillon has also been nominated in the petition. General Dhillon commands the most heavily militarized region in the world, also called the world’s largest prison and has been accused of “cruel, inhuman, degrading treatment or punishment” on unarmed Kashmiris in the petition. The defendants have been asked to respond in 21 days.

The group behind the petition, the Kashmir Khalistan Referendum Front represents a concerted effort of pro-independence Kashmiris as well as Sikhs who have been disillusioned with Modi-led BJP’s Hindu Nationalist government which has a particularly horrible record regarding religious intolerance.

The petition has cited an Associated Press Story from August 14 that explained the state of the military brutality in Indian occupied Kashmir that published accounts of over 50 Kashmiris who had been subject to torture, beatings and even electric shocks. Media outlets have also said that sounds of people being tortured are being sent out to villages via loud speaker to create an atmosphere of fear. Thousands have been arrested in the crackdown and medicines are increasingly scarce.

The case has been filed only two days before PM Modi is set to appear in front of a large crowd of American Indians in the NGR Stadium in Houston. US President Donald Trump is also expected to show up with Modi in the 3 hour-long event which is expected to be attended by 50,000 people. The event has been titled “Howdy Modi”. The President of the US meeting a head of government in his country outside of White House or the UN is virtually unheard of.

The whole run-up to the event is visibly and remarkably similar to PM Imran Khan’s address to the Pakistani Community in the Capital One Arena in Washington in July this year. Pakistani premier’s address to a huge gathering of Pakistani Americans had sent a strong message to White House, US media, and public about the popularity of PM Khan. Now apparently Indian government wants to do the same for Narendra Modi who is under continuous attack for his brutal actions in Kashmir – were state of curfew is continuing with interruptions for the 47th day since Aug 4, 2019.

This looks massive. Can't wait for @PMOIndia @narendramodi ji address to Indian diaspora. It's a proud moment for the country. The weight of Indian passport at an all time high. #HowdyModi pic.twitter.com/7paONTbaq4

However, for the last two weeks, the Pakistani, Kashmiri and Sikh community in America has been gearing up to give PM Modi a welcome he won’t be expecting. Trucks and billboards exposing Modi’s agenda have been on the roads spreading their message far and wide. The message is clear Modi and BJP’s Nazi-inspired pogrom is not acceptable to Kashmiris or Sikhs. The group has decided to organize a “Go Back Modi” rally on the same day as he takes the stage with Trump in Houston.

The banners and signs compare Modi to Hitler and outline how he presided over the systematic and organized butchering of Muslims as Chief Minister of Gujrat. The role of the BJP ideology in attacking the Babri Mosque is being shown as a proof of Modi’s belief in an India free of Muslims. His latest atrocities in Kashmir, which are continuing despite international pressure is just the realization of what has long been feared.

Read more: After Massacre at Gujarat, Modi’s has Programmed Pogrom for Kashmir

Modi had travel ban by key countries after Gujarat

Interestingly the world had recognised Narendra Modi as an undesirable character till fairly recently. After the Gujarat massacres in 2002, under his watch as Chief Minister, many countries of the world including the United States had placed a visa ban on Modi. UK and many EU countries had done the same.

Within India, Modi was blamed for orchestrating the massacres as a revenge for killing of Hindu pilgrims at a train station at Godhra.  Senior police officers had testified to that account. For several days, Hindu mobs killed and burned Muslims with impunity without any visible or decisive interference by state authorities controlled by Modi. Gujarat pogroms, ironically, established Modi as a strong leader of Hindutva.

Visa ban against Modi, from key western countries, had continued till 2013, when most countries realised that Modi was set to become India’s next prime minister and they took the decision to reverse the visa ban. Now Narendra Modi travels on A-1, (State Visas) and will thus enjoy immunity from courts like in Houston.