US Defense Secretary Mark Esper had been due to visit India, Pakistan, and Uzbekistan between March 16 and 20 but decided "to remain in the US to help manage the DoD response" to the outbreak of Covid-19. 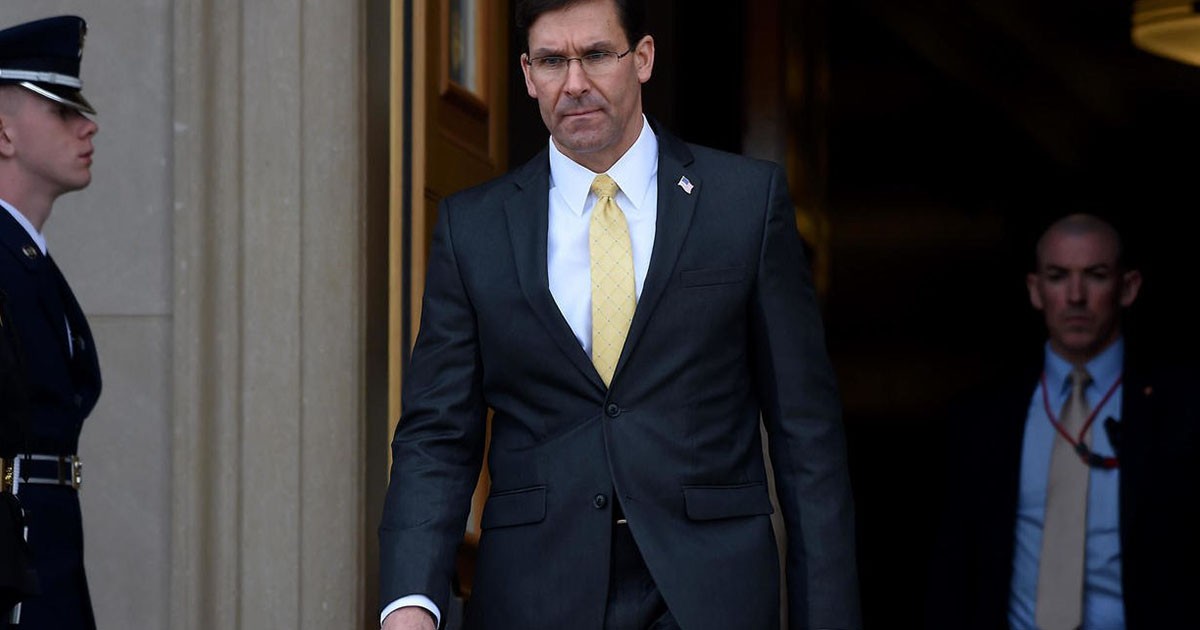 US Defense Secretary Mark Esper has put off a trip to South and Central Asia scheduled for next week because of the rapid spread of the novel coronavirus, the Pentagon said Tuesday.

Esper had been due to visit India, Pakistan and Uzbekistan between March 16 and 20 but decided “to remain in the US to help manage the DoD response” to the outbreak of Covid-19, the new strain of potentially deadly coronavirus spreading around the world, said Pentagon spokeswoman Alyssa Farah.

The US military has been largely spared so far by the coronavirus, with only a dozen or so cases confirmed among its forces deployed around the world. But officials are trying to keep the Pentagon headquarters, where 20,000 service people and civilian employees work every day, free of the virus.

Civilian employees have been asked to do remote working from home while those who do show up are advised to practice “social distancing” and keep at least two yards (meters) away from their colleagues in the workplace.

Coronavirus as deadly for Italian football as two World Wars

Only the gunfire of two World Wars had previously stopped “calcio” in football-mad Italy. But from Tuesday all sporting events in the Mediterranean country, including the top-flight Serie A league, will be suspended for a month because of the coronavirus crisis.

Italian Prime Minister Giuseppe Conte made the dramatic announcement as the nation grappled with a disease which has killed 631  and prompted the government to restrict movement for its 60 million citizens.

The suspension until April 3 amounts to the postponement of two championship days, in a league which has already been hit by delays, with four previous matches yet to be played.

The Italian Football Federation (FIGC) held an emergency meeting on Tuesday to discuss a strategy with four proposed solutions which will be discussed again on March 23.

The first would apply if the league resumes on April 3.

In that case, FIGC president Gabriele Gravina said, the federation would “take advantage of all the dates available until May 31,” a week after the season was originally due to finish.

Other options include not assigning the Scudetto this season, organising play-offs for the league titles or using the standings up until the moment the season was interrupted, the FIGC said.

In the final case, Juventus would be crowned champions of Italy for a ninth consecutive season. There is also the problem of who qualifies for next season’s European competitions, and which teams are relegated.

“I’m not an optimist, unfortunately,” said AC Milan president Paolo Scaroni, whose club donated 250,000 euros ($294,000) for the care of patients in their Lombardy region, hardest hit by the contagion.

“So many of us are involved in football that there is a real risk of contagion. Even if it is true that nobody is as well-monitored as the players.”

Since 1898, only the dark days of two World Wars had stopped Serie A — between 1916 and 1919 and from 1943 to 1945. In 1915, the competition was interrupted following Italy’s entry into the First World War, with Genoa awarded the title which Lazio still claim was tied.

There is little room for manoeuvre because of Euro 2020 beginning on June 12. And there are also concerns that the European tournament, due to be hosted across 12 countries with Italy hosting the opening match, might face an unprecedented cancellation.

As for the Italian Cup, interrupted after the first leg of the semi-finals, it is almost impossible for it to be completed before the summer.

Several clubs on Tuesday announced the suspension of training sessions until early next week, including second-placed Lazio, along with AC Milan, Fiorentina and Cagliari.

The government decree allows for the possibility of organising matches under international jurisdiction in empty stadiums, such as ties in UEFA’s Champions League and Europa League.

Juventus are due to host Lyon in the second leg of their Champions League last-16 tie in Turin next week. Inter Milan host Spain’s Getafe in the Europa League on Thursday while Roma welcome Sevilla a week later.

But Roma coach Paulo Fonseca believes there should be uniformity between the leagues and European competitions.

“We can’t stop the Italian championship and then play a Valencia-Atalanta, for example,” Fonseca told Spanish agency EFE.

Read more: Coronavirus Fear: Is School Closure the only Solution?

“There is one thing that is more important than football and it is people’s health. The involvement of UEFA will be very important for all the championships.

“Very important decisions will be made and these must not be taken only by the respective leagues, but together with UEFA.”

The world failed to prepare itself against zoonotic dieases despite warnings