The Federal Reserve has cautioned policymakers on the uncertain future for the US Economy, as the country moves out of lockdowns. It stressed upon the need to re-employ thousands of people who are out of work, to stave off the harder economic jolts from the pandemic. 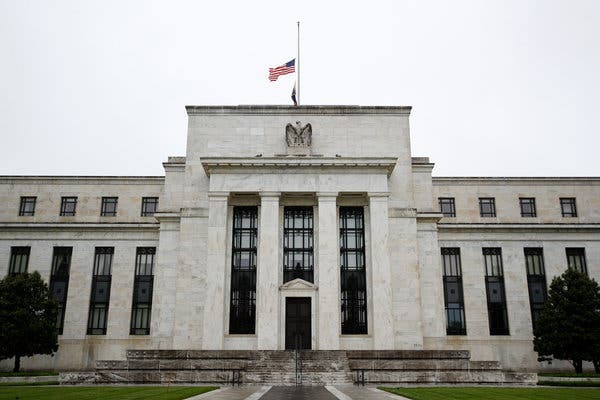 The Federal Reserve (Fed) on Wednesday projected a solid rebound for the US economy next year amid optimism that the worst of the coronavirus pandemic’s disruptions has passed. Fed Chair Jerome Powell however cautioned that the outlook remains highly uncertain, and both the central bank and Congress may have to do more to boost the recovery. The fact that the pandemic has caused mass lockdowns across the planet, coupled with a slowdown in the global economy that had been set in motion even before the pandemic surfaced, means that the US Economy future is uncertain.

Here you go, the latest Federal Reserve projections for the US economy: pic.twitter.com/ejsFMNjSBE

At the conclusion of its two-day meeting, the Fed’s policy-setting Federal Open Markets Committee (FOMC) confirmed it will keep the benchmark interest rate at zero until the recovery is underway.

This development echoes previous announcements by the World Bank and the OECD, both of which gave ominous foretellings for the future of the global economy in a post-pandemic world.

The Fed also released economic projections of FOMC members for the first time since December. Their median forecast is for the economy to contract by 6.5 percent this year, with unemployment falling to 9.3 percent by the end of the year from its current 13.3 percent.

“The coronavirus outbreak is causing tremendous human and economic hardship across the United States and around the world,” the FOMC statement said.

“The ongoing public health crisis will weigh heavily on economic activity, employment and inflation in the near term, and poses considerable risks to the economic outlook over the medium term,” the central bank warned.

Despite nearly two million cases and 112,000 deaths from COVID-19 in the US, there is evidence the economy may be rebounding from its bottom.

The employment report last week showed that 2.5 million jobs were added in May, but more than 20 million people were still out of work.

As a result, the FOMC will keep the key rate at zero “until it is confident that the economy has weathered recent events and is on track to achieve its maximum employment and price stability goals.”

The median forecast of FOMC members shows they expect the key rate to stay the same through 2022 at least, before edging back up near 2.5 percent over the longer term. Only two central bankers projected the rate would rise off zero in 2022.

However, they expect a solid economic rebound in 2021, with growth of five percent that would then slow to 3.5 percent in 2022.

These projections only impress upon the fact that the US Economy future is uncertain, and has compounded the work for American policymakers as they move to restart the economy after stringent lockdowns.

US Economy future uncertain: people need to be put to work

Powell cautioned that “the path of the economy is highly uncertain.”

While the May jobs report was “probably the biggest data surprise that anybody can remember,” he noted that tens of millions of people remain out of work.

“Somehow, we’ve got to all, as a country, get those people back to work. They didn’t do anything wrong. This was a natural disaster,” Powell told reporters, pledging that the Fed would “use all our tools” to get back to full employment.

Read more: Global economies will contract by 6% in 2020: OECD

The Fed also said it will continue to work to ensure households and businesses have access to credit by continuing to purchase Treasury bonds and mortgage-backed securities at its current rate.

Fed Chair Jerome Powell said after the meeting that the programs are “providing financing where not otherwise available,” and also increasing the willingness of private lenders to offer credit.

The Fed will continue to use its tools “forcefully, proactively and aggressively until we are confident that we are fully on the road to recovery,” he told reporters.

The central bank already cut rates to zero in March as the crisis began and has been pumping trillions of dollars into the economy — essentially printing money.

This week, it again expanded its planned Main Street Lending Program for small- and medium-sized businesses, which Powell said was the result of continued feedback from potential borrowers, and will make the program more effective.

The world economy is to contract at least 6% in 2020, with the unprecedented loss of income and “extraordinary uncertainty” caused by measures to contain the coronavirus outbreak, the OECD said. This comes on the heels of an earlier announcement by the World Bank of the world facing the ‘worst economic situation in 150 years’ and compounds the problems for policymakers across the globe. World Bank gave a prediction of a 7% decline for the world.

The OECD warned about a potential second wave of contagion later in the year, the economic output could shrink by as much as 7.6 percent, it warned.

In both scenarios, recovery will be “slow and uncertain”.

GDP growth should resume in 2021, by 5.2 percent if the virus is contained, and 2.8 percent if there is another infection wave, the Organisation for Economic Co-operation and Development said in its latest outlook, entitled “World Economy on a Tightrope”.

It warned that by the end of next year, “the loss of income exceeds that of any previous recession over the last 100 years outside wartime, with dire and long-lasting consequences for people, firms and governments.”

As unemployment rises, private debt levels in some countries are “uncomfortably high,” said the report, “and business failure and bankruptcy risks loom large.”

In its previous outlook in March, by when the outbreak had hit China but not yet the world’s other large economies, the OECD slashed its global growth forecast by half a percentage point to 2.4 percent, which would have been the worst performance since the 2008 financial crisis.

Things have got considerably worse since then, with commerce and travel shut down as governments scrambled to rein in the pandemic by keeping people at home.