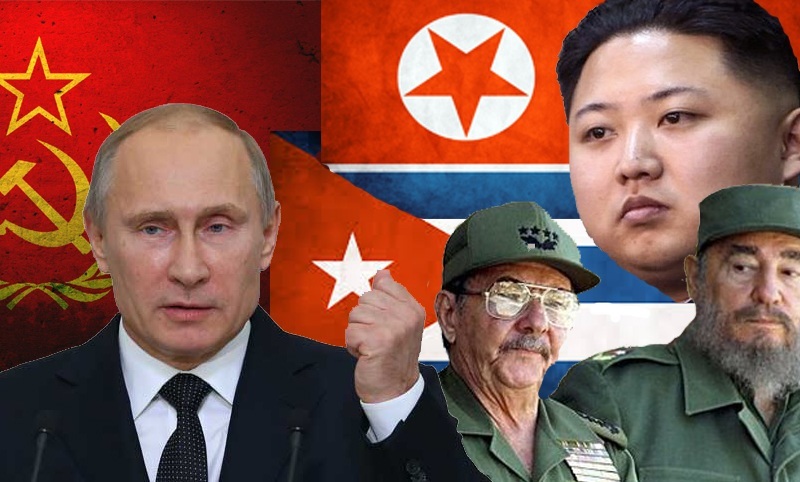 The Ukraine crisis — and Russian-American relations — reaches an inflection point with the assessment made by the International Institute of Strategic Studies (IISS) in London that North Korea’s dramatic leap in ballistic missile capability in the past year is attributable to its clandestine acquisition of a Soviet-era technology that is available in a factory near the frontline in Donbass war zone, close to the breakaway region held by Russia-backed separatists.

Paradoxically, the US needs Russian intelligence inputs to protect the American people from potential nuclear radiation

The IISS flags that North Korea’s Hwasong-14 missile, tested for the first time, twice, last month signifies an incredible leap in technology that is simply inconceivable for human ingenuity – that is, unless Pyongyang gained access to foreign technology from an established missile power.

However, the IISS report says,

Now, there could have been clandestine transfers of the engines from either Russia or Ukraine with the knowledge of the local authorities – or more likely, there might have been clandestine smuggling by the mafia from factories that are loosely guarded.  The mafia is active in both Russia and Ukraine.

The US ready to abandon the sanctions against Russia? There is an existential choice to be made here because Russian intelligence must be up to date on North Korea

The IISS is inclined to point the finger at the factory in Ukraine (known as Yuzhnoye which has facilities in Dnipropetrovsk and Pavlograd), which has been in dire straits ever since 2006 when Russia stopped buying from it as part of the Soviet-era supply chain and the once-vaunted factory came to the brink of financial collapse circa 2015.  To quote the IISS,

Several questions arise. Importantly, almost all of them will have implications for the trajectory of US-Russia relations. Most important — the timing of the IISS report. The US-Russia relations are on razor’s edge. (See my blog Russia edgy as the US prepares to retaliate.)

The window of opportunity will soon close, so diplomatic action must be taken immediately

Thus, can it be that the Russian intelligence leaked the information already available with it to respectable western sources so as to underscore in western capitals that the West has ended up creating a bleeding wound in Ukraine that is turning gangrene? (After all, IISS has profound links with Smiley’s people.)

It is entirely conceivable that the CIA and the Pentagon are ahead of the IISS’ scientific finding. Has this got something to do with the threatening reports that refuse to die away that the Trump administration is revisiting the moribund idea of supplying lethal weapons to hit at Russia-backed separatists in Donbass — which Russia has been opposing tooth and nail? Simply put, is someone firing a flare into the night sky to make the point that it is a rotten idea to supply lethal weapons to Ukraine which will sooner or later find their way inevitably to non-state actors? This is one thing.

Indeed, Russia is keen to engage with the Trump administration over the Ukraine crisis. But then, Russia also hopes that progress on Ukraine would lead to an easing of Western sanctions. Now, on the contrary, the US Congress’ latest bill on Russia sanctions expressly forbids the White House from negotiating the sanctions removal without its prior approval. If there is ever a Gordian knot, waiting to be cut, this is it.

The IISS concludes by stressing the high importance of the “US and its allies, along with China and perhaps Russia, to negotiate an agreement that bans future missile testing, and effectively prevents North Korea from perfecting its capacity to terrorize America with nuclear weapons. But the window of opportunity will soon close, so diplomatic action must be taken immediately.”

However, such a process demands a high level of Russian-American coordination and cooperation. Of course, ‘Barkis is willing’. But, is the US ready to abandon the sanctions against Russia? There is an existential choice to be made here because Russian intelligence must be up to date on North Korea. Paradoxically, the US needs Russian intelligence inputs to protect the American people from potential nuclear radiation. The IISS report is here.

Previous articleWhat if Kulsoom Nawaz doesn’t win from NA-120?
Next articleThe Turkish-Chinese Strategic Partnership Is Stronger Than Ever Before

20 September 2021
Previous articleWhat if Kulsoom Nawaz doesn’t win from NA-120?
Next articleThe Turkish-Chinese Strategic Partnership Is Stronger Than Ever Before

Hotline between India and USA will continue under Trump

China concerned over its depleting influence on North Korea