US Space Force may lose trademark of name to Netflix

The US Space force may lose the right to its name to Netflix. While the issue will not stop either organization from operating, there can be a potential tiff when merchandise is rolled out. The US Space Force is behind in the race, and it seems like Netflix has caught it unaware. 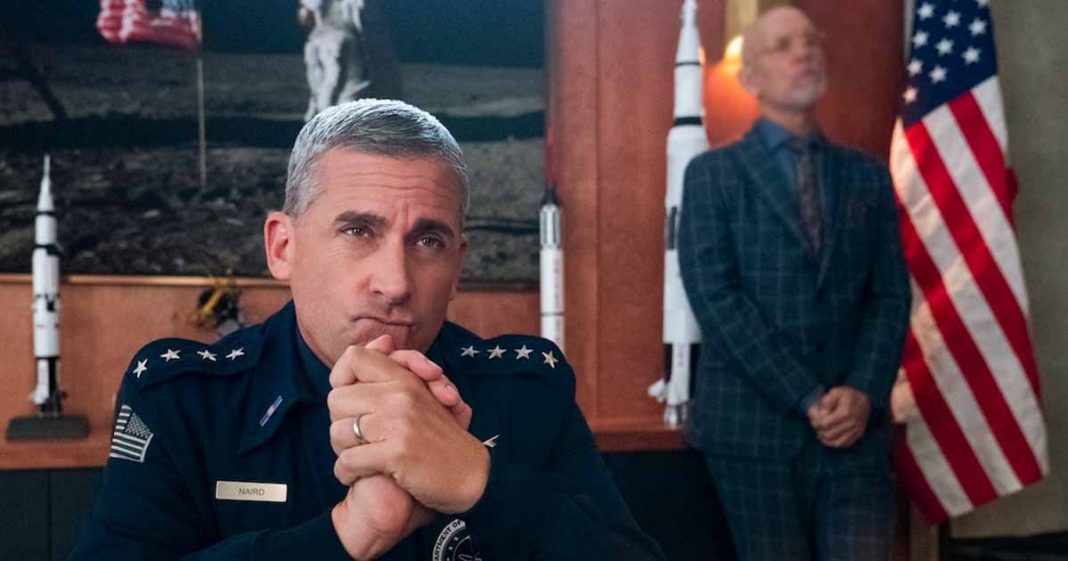 Netflix’s hit comedy show ‘Space Force,’ a satirical depiction of the US military, reportedly had registered a trademark for the use of the name before the newly-established branch of the armed forces. This is a faux pas for the newest branch of the US military, and possible ramifications may include the actual Space Force having to change its name as the trademark is now unavailable. A protracted legal battle is the last thing the beleaguered US military wants.

The streaming service filed a trademark application for Space Force as early as January of 2019, cementing its rights in multiple places, including Europe, Australia, and Mexico, according to Hollywood Reporter. The similarly-named arm of the US military – passionately endorsed by Donald Trump – owns only a pending application for registration in the United States.

US Space Force left behind by Netflix

The US Patent and Trademark Office usually grants trademarks on a “first-to-use” basis, which means that priority is given to whichever entity was first to put a name or a brand to use. But in many other countries, trademarks are reserved on a “first-to-file” approach – and this is where Netflix left the US military far behind.

Netflix’s Space Force debuted in late-May; it satirically portrays a fictitious orbital fighting force and the political context around it. The main characters in the show are members of America’s top military brass as well as a handful of space exploration geeks.

All in all, trademark law generally allows for the use of similar names in different industries. But as Hollywood Reporter notes, a legal battle could break out if the existence of the two Space Forces plays into merchandise confusion, with customers unable to see who makes a product they buy, Netflix or the US Air Force.

This isn’t actually a problem for the US Armed Forces as each organization can go about their way without much confusion. The issue arises, however, if and when the two start “trafficking in similar products.” Trademarks are necessary when launching a “Space Force” clothing line, for instance.

Aside from the branding issues, the US Space Force, founded with great fanfare last December, was caught red-faced when it emerged that their logo conspicuously resembled Star Trek’s famous Starfleet emblem.

US military reticent about potential dispute with Netflix

The military, meanwhile, seems to be unwilling to engage in a dispute with Netflix. “At this time, we are not aware of any trademark conflicts with the fictional program Space Force produced by Netflix,” the Hollywood Reporter quoted an Air Force spokesperson, politely wishing the service “the best in their creative depiction of our nation’s newest branch of the military.”

The force’s official mission is to ensure the US has “space superiority” and to provide “offensive and defensive space control,” among other objectives.

The U.S. Space Force meanwhile, is in a race to trademark its own name.

Plans are underway to secure trademark licensing related to the sixth military branch, currently under the Department of the Air Force, spokeswoman Lynn Kirby told Military.com on Tuesday.

“The Department of the Air Force has applied for trademark registrations for the Space Force mark with the United States Patent and Trademark Office (USPTO) and has common law rights to the word mark and other Space Force intellectual property,” Kirby said in an email.

A legal battle on the horizon? Past precedents say yes

The US Defense Department has launched trademark infringement warnings and lawsuits in the past.

In 2017, the Army filed a notice of opposition with the Trademark Office against the Golden Knights, a National Hockey League team in Las Vegas, over its use of the service’s elite parachute unit’s name and similar branding. The two eventually came to a trademark “coexistence agreement” more than six months later, the Las Vegas Sun reported.

The Marine Corps, which vigilantly guards its trademarks, in one case took on Disgruntled Decks, a card game being sold on Amazon and Facebook that service officials found disrespectful to women in the military. The company ultimately removed the Marine Corps name and insignia from their decks.