Recent US-Taliban Peace deal brought the two main warring parties to the negotiating table. The signing of this agreement is a clear manifestation of Pakistan’s whole-hearted efforts for peace and prosperity in Afghanistan and in the region 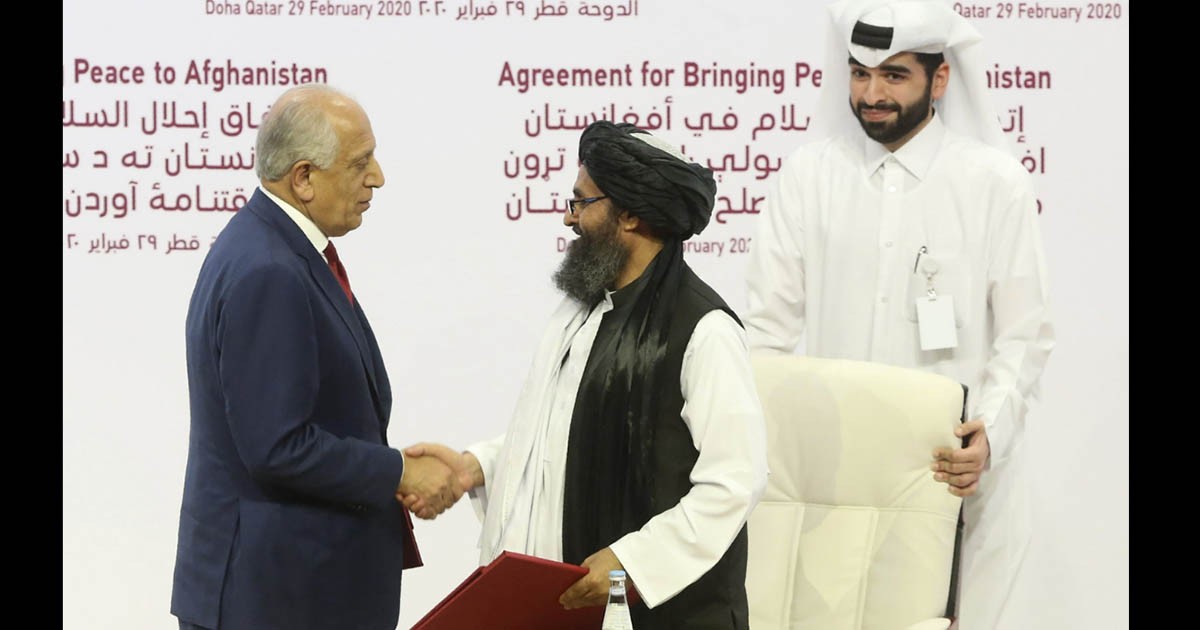 Much has been written and said about the recent US-Taliban Peace deal that was inked on the last day of the previous month. Experts in the field differ over the prospects of lasting peace in Afghanistan in the backdrop of this deal. However, this must be kept in mind that a thousand-mile journey begins with the first step. The deal may have many flaws but it is indeed the first step in the right direction that aims at bringing peace to the war-torn country and the region at large.

The deal that reached between the Afghan Taliban and the US consists of four parts: complete withdrawal of the foreign forces (US forces), intra-Afghan dialogue, a temporary ceasefire that would be extended if the intra-afghan dialogue goes ahead as planned and Taliban’s assurance of not letting Afghan soil to be used by terrorist organizations against the US or its allies. By analysing in detail it can be inferred from the deal that after all these long years, since 2001, Taliban have been the victors while the US, a vanquished state. The latter has been seeking a secure withdrawal agreement all along these nine-rounds of peace negotiations under Trump administration.

Voices are raised that negotiating peace with the Taliban is highly risky and dangerous. The danger comes from the disunited and decentralized structure of command and control among different factions of the movement. They are regarded as disloyal and that they might back-off from the deal. But there is no unity in the Afghan government either.

The only main obligation upon them is to guarantee that Afghan soil is not used by Al-Qaida, the self-proclaimed Islamic State (IS) or any other terrorist organization against the US or its allies

Results of the presidential election that was held in September 2019, are still in limbo because of the intransigent attitude of none other than the country’s chief executive Abdullah Abdullah. Apart from the Taliban, Afghan society is disintegrated into different groups based on differing and often opposing ethnicities most of which are vying for power. Hence a struggle for power ensues among different warlords which have brought nothing to this country but chaos and disorder.

It is highly unrealistic that these warring factions can be brought under a centralized control before embarking upon any kind of peace initiative. Afghan Taliban are the main hostile group who have been fighting the foreign troops since the US invasion of Afghanistan back in 2001. Making peace with them is the first step towards a long-lasting and a positive peace within conflict-ridden Afghanistan. The deal between them and the US may fail to bring a comprehensive peace in the country but it has definitely paved a way for future such endeavours.

Furthermore, spreading pessimism about the success of the deal, mainly on the basis of the Taliban’s disloyalty, is highly misleading. The current peace deal gives much to the Taliban than what is demanded from them. They are less obligated than the US is. The only main obligation upon them is to guarantee that Afghan soil is not used by Al-Qaida, the self-proclaimed Islamic State (IS) or any other terrorist organization against the US or its allies.

Realistically speaking, the Taliban has got nothing to lose with or without a deal. In fact, they are better off with this deal as it has given them international credibility and a sense of pride to have brought a super-power to its knees after a 19-year long war. The US spent trillions of dollars to defeat the Taliban but were compelled in the end to seek a withdrawal agreement with the latter.

Despite the military superiority of the US with its state of the art weaponry, the Taliban still holds sway over large parts (about 60 percent) of Afghan territory. The argument that they might back off from the deal does not hold any ground. It is, in fact, celebrated by the Taliban and their supporters as a great success against the US and the 28 members of military organization, NATO.

As Taliban leaders have also expressed their concerns for peace, they must refrain from violence and give peace a chance. The renewed wave of violence would amount to nothing but blurring a ray of hope for a peaceful and prosperous Afghanistan

The latest ramping up of attacks by the Taliban against the Afghan forces and the subsequent response of the US, in the shape of air-strikes, just days after the deal was signed, is used as a pretext by some claiming that the agreement would soon be called off. Afghanistan’s interior ministry spokeswoman recently claimed that some 33 attacks were carried out by Taliban within 24 hours killing six civilian and many security personnel

On Friday, March 6, two gunmen opened fire in an event in Kabul, also attended by the Chief Executive Abdullah, killing more than 30 people and wounding more than 60. But soon after the attack, the Taliban denied the responsibility which is appreciable.

Such attacks were not unexpected. Taliban from the very beginning had rejected Ashraf Ghani’s government calling it a puppet regime of the US. After the Taliban government was toppled by the US in 2001, the movement mainly relied on the use of force to regain power and control in the country. With their firm resolve and coercive guerrilla tactics, they succeeded in forcing the US with all its might to withdraw.

In order to have an upper hand in the intra-Afghan dialogue, they would resort to the same tactics of carrying out more attacks against Afghan forces. But as Taliban leaders have also expressed their concerns for peace, they must refrain from violence and give peace a chance. The renewed wave of violence would amount to nothing but blurring a ray of hope for a peaceful and prosperous Afghanistan.

Besides the internal scenario, the regional and international powers have their own axe to grind. Among the regional states, Pakistan is at the forefront of the Afghan peace process. Peaceful Afghanistan is in the better interest of Pakistan. It has been proactive in the recent developments that brought the two main warring parties to the negotiating table. Looking through the lens of realism, no state, whether it is Pakistan, the US or for that matter India, is more interested in peace in Afghanistan than its own national interests.

India’s growing influence in Afghanistan is of great concern for Pakistan as the latter cannot afford to have hostile neighbours at both its eastern and western borders. It will employ any means available to it to pursue installing a pro-Pakistani government in Kabul so as to reduce India’s presence across the western border.

Similarly, the Trump administration has been actively pursuing this peace deal in an attempt to win the coming presidential election by the end of this year. He is least concerned about the peace or the future political scenario of Afghanistan. Trump’s main aim has been to show to his people that he had delivered upon the promises he made during his presidential campaign back in 2016. He ordered the withdrawal of US forces from the Middle East, revived trade deals like that of NAFTA and others, pulled out of Trans-Pacific Partnership (TPP), withdrew from the Paris Climate change agreement and embarked upon a trade war with China.

These moves at the foreign policy front may help Trump win the election but they do not augur well for the world in general and Afghanistan in particular in the long term. Afghanistan might be left in the lurch if the US suspends all the economic and humanitarian assistance to the country after its withdrawal.

In the midst of all the commotion, the peace deal between the US and the Taliban appears to have many positive aspects. It has reaffirmed the fact that political problems cannot be resolved through military might, but they require political and diplomatic solutions.

In this age of globalization, the paradigm of power politics has shifted to that of economics and diplomacy which define a nation’s strength. Furthermore, the deal is hailed by the majority of Afghans and others and is considered to be the first step in the right direction which will ultimately lead to a positive peace if implemented in true spirit. It also gave international credibility to the Afghan Taliban, who were rendered as non-state actors after they were dethroned in 2001.

The deal also projects the peaceful image of Pakistan to the world. The signing of this agreement is a clear manifestation of Pakistan’s whole-hearted efforts for peace and prosperity in Afghanistan and in the region. The US, the Taliban and the rest of the western countries have thanked and lauded Pakistan for its tireless efforts to bring an end to this long war. In order to make this peace process a success, all the parties to the conflict are required to respect and conform to the deal. Without conformity and cooperation, the search for peace would be a wild goose chase.

Muhammad Tayyab is an MPhil Student from the Department of Peace and Conflict Studies at National Defence University Islamabad. He also remained as a Visiting Lecturer at the Department of International Relations, University of Peshawar. The views expressed in this article are the author’s own and do not necessarily reflect the editorial policy of Global Village Space.