It is hoped that the USA will help its friend India in solving the military problems with China & Pakistan (which the USA itself has landed India into) in a peaceful and non-violent manner. 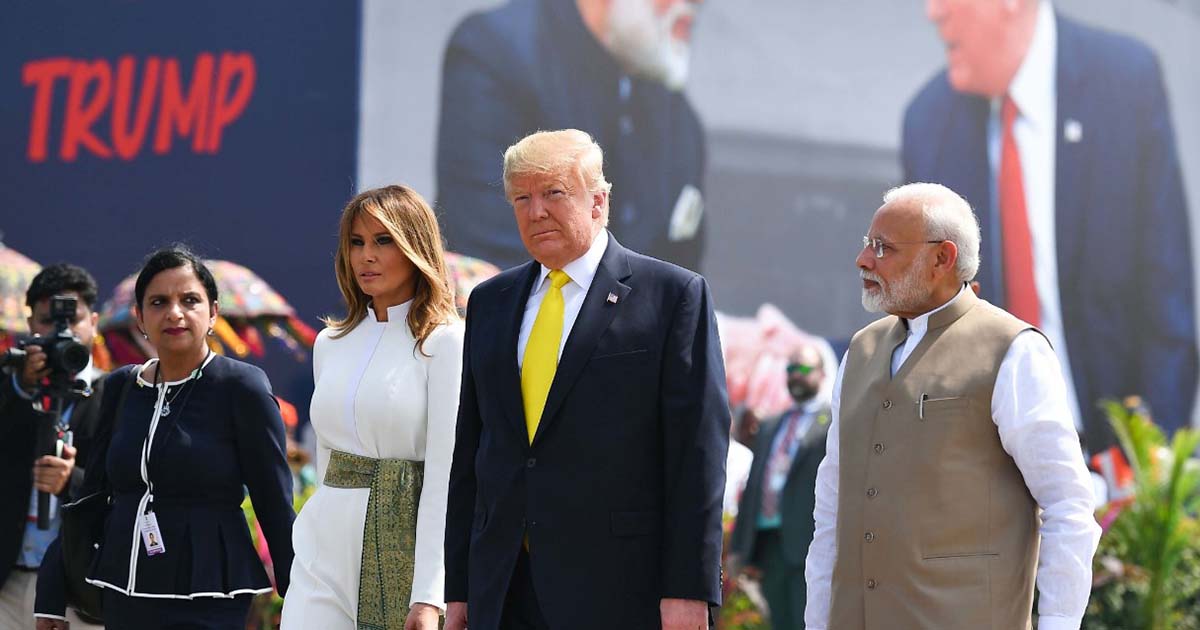 India was humiliated in the 1962 Indo-China war during the Congress party rule of Prime Minister Nehru. However, there was at least one satisfaction to the Indians that this humiliation came about because of the mistakes made exclusively by the Indians and their leaders. Inida USA

But in 2020 the humiliation being faced by India, at the hands of China at LoC in Eastern Ladakh and effrontery by Pakistan in Gilgit-Baltistan of united-J&K, is not merely due to mistakes made exclusively by the Indians and their leaders but mainly due to the USA which instigated India.

The USA has now left India alone to face the military music – to provoke China militarily through QUAD and to provoke China & Pakistan collectively through the creation of obstacles to CPEC/Gwadar port which are of extreme importance rather practically the questions of life & death for China and even to Pakistan.

But how unconcerned the USA is (about these US-created military problems for India) is evident from the speech of President Trump at UNGA 2020 (where Trump while assailing China throughout his speech on other issues) did not utter a single word about Chinese aggression against India at Eastern Ladakh.

Now China has officially said that it no longer recognizes Ladakh as Union Territory of India. This means that not only all the talks of constraining China for the restoration of status-quo-ante of April 2020 at Eastern Ladakh have become meaningless & closed (that too when China is now consolidating militarily in Indian territory whereas India is consolidating merely in Indian territory) but now China is also free to snatch more territories from India even militarily as per the 1959 claim line of China.

It is crystal clear that Government of India (GoI) could not have done what it did on August 5, 2019 (when it changed special status of J&K and converted this State into two Union Territories) and could not have said (through its senior Ministers on the floor of the Parliament) about rest of J&K (where GoI threatened to militarily retrieve not  only PoK & Gilgit -Baltistan which is under nuclear Pakistan but also Aksai Chin which is under nuclear and much more powerful China) without a promise from the USA that it will help India militarily in case of envisaged military operation to retrieve UT of Ladakh (which includes Gilgit – Baltistan and Aksai Chin) from Pakistan & China.

All this on August 5, 2019 was done by India under US-pressure because the USA is interested in India taking Gilgit-Baltistan, which has CPEC in it which the USA is bent-upon destroying as the CPEC feeds to Gwadar port which will be used strategically & militarily by China and which the USA will never allow.

The USA is against CPEC / Gwadar port in the present form, it is evident also from what Ambassador Alice Wells said on November 21, 2019. Due to this background,  the importance of Gilgit-Baltistan (the gateway to CPEC / Gwadar port) is evident also from Pakistan’s resolve to convert it after November 15 as the 5th province of Pakistan and which is a military effrontery by Pakistan against India.

This plan of the USA [by roping-in India (which was though making sweet noises about China-India friendship through Modi-Xi personal & official many meeting) for constraining China through QUAD and to obstruct CPEC / Gwadar port] was understood by China hence it took pre-emptive military measures to safeguard the CPEC by making intrusions in Eastern Ladakh which revealed military weakness of India vis-a-vis China thus making India useless for QUAD in the eyes of the region and the entire world.

But what is surprising is that – Why did the USA not militarily help India  (not merely to restore status-quo-ante of April 2020 which is irrelevant but) in retrieving Gilgit-Baltistan specially when China acted militarily against India in Eastern Ladakh?

No one will believe that it may be due to Corona -pandemic and / or due to US-presidential election, because India can’t allow such solemn promise to be flouted by the USA on such flimsy grounds about a matter (said Ladakh episode) which has created such humiliation & shame for India (due to its revealed military weakness) in the region and all across the world and which is bound to harm Indian interests in many ways.

The USA must have known or at least now should know that in addition to two fronts war where Pakistan is bound to join China for militarily snatching from India the remaining J&K (at least Muslim Kashmir), India has also not understood that what is the implication of keeping government in exile of Tibetans at Dharamshala and using SFF militarily against China as legally it gives right to China even to help the cause of mini-Khalistan (the demand for which is being raised also from the soil of the USA).

Indians are not that foolish who will not understand that the USA after instigating India against China & Pakistan has now left India alone to face the military music. And that too when the USA knows that India was in no position to handle two fronts war and US boots on ground (at least from US-air force) are absolutely necessary for fighting two fronts war against China & Pakistan. But Indians are certainly over-smart people hence politically naive and do not understand that in the first place there is no need for any war with China or Pakistan to settle the borders with China or for resolving the Kashmir problem with Pakistan.

Therefore even now (without putting any US-boots on ground) the USA can help its friend India in coming out of the crisis, which the USA itself has landed India into, by asking India to do the following: –

[It is like resolving a dispute between two parties in a country. In India the Executive Magistrate maintains status-quo of disputed property and directs the contending parties (under section 145 of Criminal Procedure Code) to get the title decided by civil court which will justify the possession]. The USA should issue a threat to China that if it obstructs said ‘UN Judicial Commission’ through veto etc then the USA will constitute a new world body without China.

Regarding India’s problems with Pakistan the USA should understand that these are the result of the problem of communalism in Greater-India which resulted in partition of India in 1947 and also in chronic & gory Kashmir problem. These can be solved by two mechanisms. First by Dual Citizenship in Greater-India and second by plebiscite in united-J&K as mentioned below:-

About 1 million were reportedly killed and about 15 million displaced in most gory situations due to partition. There was no legal provision for population transfer due to partition hence these tens of millions of displaced (due to violence) people should have been rehabilitated in their native country. This illegal population transfer (due to violence) is the main cause of communally poisoning and of emboldening the communal forces in Indian subcontinent.

Now at least these displaced people should be given dual citizenship so that communalism can be eliminated from Greater India. This will also make redundant the controversial & communal (and main cause of 2020 riots in Delhi in presence of Prez Trump) the ‘Citizen Amendment Act’ of India (along with threatened ‘National Register for Citizens’).

The USA should ask India to work for dual citizenship (one for India and other for Pakistan or Bangladesh) for about 160 million Hindus and Muslims (~ 80 million Hindus and same for Muslims) who were displaced during partition [about 20 % of their population (Hindus) from each of Pakistan and Bangladesh were expelled whereas Muslims remain same rather increased little to about 14% in India not to talk of tens of millions of Muslim illegal immigrants in India mainly from Bangladesh].

USA should take some responsibility

The USA should also ensure (militarily if necessary) that these Hindus & Muslims who utilize dual citizenship in other country are able to live over there in proper law & order conditions which will ensure their human rights as enshrined in ICCPR of the UN.

India should ensure Plebiscite in united-J&K not only as per UN resolution but also as mandated by the ‘Instrument of Accession’ (IoA) the relevant part of which reads as “the question of Accession should be decided in accordance with the wishes of the people of the State, it is my Government’s wish that, as soon as law and order have been restored in Kashmir, and her soil cleared of the invader, the question of the State’s Accession should be settled by a reference to the people. Yours Sincerely Sd/- Mountbatten of Burma”.

For this plebiscite the USA should ensure that India brings the Pakistan side of united-J&K under its administrative control (and also free from outsiders) as mentioned in IoA.

During said take over of remaining united-J&K by India for plebiscite and during the achievement of dual citizenship if situation arises then the USA should facilitate the realization in first stage of Greater-India (and may be SAARC in second stage) on the basis of secularism, democracy, federalism and rule-of-law. This will also solve the problem of CPEC / Gwadar port to the satisfaction of the USA.

It is hoped that the USA will help its friend India in solving the military problems with China & Pakistan (which the USA itself has landed India into) in a peaceful and non-violent manner. This the USA should do not condescendingly as a charity but as a long term benefit of the USA too, because the world may not respect the Monroe doctrine for long.

Hem Raj Jain is the author of ‘Betrayal of Americanism.’ The views expressed in this article are the authors own and do not necessarily reflect the editorial policy of Global Village Space

Covid-19: Pakistan could have tackled it better