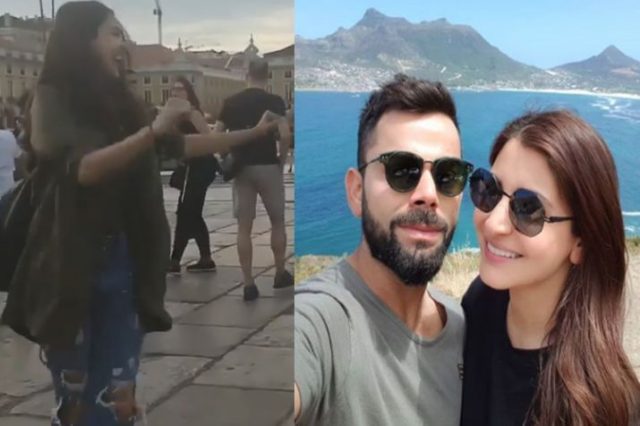 The newlywed couple Anushka Sharma and Virat Kohli are having a wonderful time in Cape Town, South Africa these days.

The couple is sharing compelling photos from the trip on their social media account.

The couple travelled to Cape Town to celebrate New Years soon after hosting a grand wedding reception for friends and family in Mumbai.

The two have been seen street shopping, dancing and spending some amazing moments together.

Now, in the new set of pictures, we see Anushka smiling brightly for the camera with Virat, and giving perfect company to the newlyweds is Virat’s close friend and cricketer Shikhar Dhawan along with his family.

The pictures were shared on Yash Raj Film’s Instagram account. The couple was also spotted chatting in a café with another Bollywood actor Akshay Kumar.

Akshay Kumar too is in Cape Town for New Years. He has returned back to Mumbai, but Anushka is expected to return after Virat’s test match with South Africa.

She is expected to commence shooting for her next film ‘Sui Dhaga’ soon after her return.

Recently, videos of the couple dancing on the streets of Cape Town went viral on the Internet.

Guess who is up for Bhangra on the streets of Capetown! ❤️

Anushka Sharma was seen shaking legs with a street dancer in the video. In another video, Virat Kohli’s was seen doing a brilliant bhangra in the video.

Read more: Malala and Mahira the most popular Pakistanis on Wikipedia in 2017

Another day, Kohli shared his picture with Anushka Sharma with a heart-melting message for his wife in the caption.

Cape Town is such a beautiful place and even more beautiful with my one and only! ❤