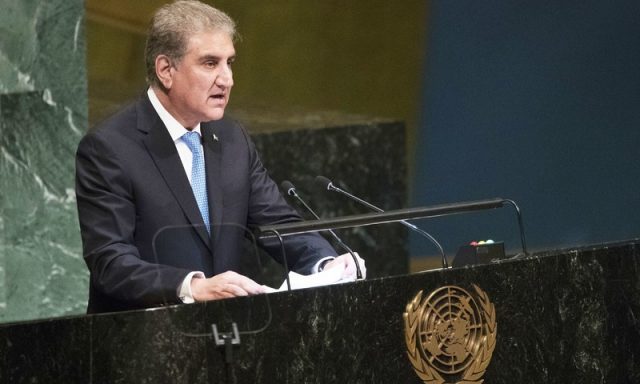 Pakistan’s foreign minister’s speech at the United Nations General Assembly session has been hailed for inclusiveness of the global issues alongside representing Pakistan’s interest effectively in front of the entire world. At home, people rejoiced at the gesture of speaking in the national language Urdu instead of English which gives more credibility to our culture and uniqueness since language is an important part of it. Here we will dissect the entire speech of Pakistan foreign minister for the purpose of thoroughly understanding it.

Freedom of Speech and sentiments of people

The issue of blasphemous cartoon competition of Prophet Mohammed (Peace Be upon Him) had stirred the sentiments of billions of Muslims around the world. Pakistan made sure to raise this issue in the highest of global forums. Pakistan stated that the freedom of speech is respected but there should be an appropriate balance to it so that it should not hurt the sentiments of people.

Shah Mahmood Qureshi specifically highlighted the atrocities being committed by the Indian army inside the occupied valley of Jammu and Kashmir. He welcomed the report from the UN Human Rights Commission on the brutality stating that ‘it has vindicated Pakistan’s stance’. He also urged the commission to visit both sides of Kashmir, Azad and occupied, urging India to welcome the commission too.

Foreign Minister effectively conveyed that no one has paid the cost of the world’s short-sightedness in the war against terrorism more than the people of Afghanistan and Pakistan.

But India has a history of restricting the access of independent observers to report the human right violations in Occupied Kashmir. The fact that India always resorts to the one reason of terrorism whenever Pakistan proposes the course of the bilateral dialogue was also put forward by Pakistan’s foreign minister.

He specifically mentioned how the arrested Spy, the Indian Naval Officer Kulbhushan Yadav, had given the information about the way he carried out the espionage in Balochistan under the directive and financing of his government. “The access of sophisticated military technology which has the potential of disturbing the regional balance under the delusion of a war below nuclear threshold has forced Pakistan for a minimal deterrence capacity”, he said.

Pakistan has always stated that war is never a solution between two countries who are equipped with nuclear weapons. On contrary, in sporadic fashion, some minister and even Indian army chief talk about waging war with Pakistan which shows the maturity of Indian strategic intelligentsia.

Foreign Minister effectively conveyed that no one has paid the cost of the world’s short-sightedness in the war against terrorism more than the people of Afghanistan and Pakistan. He reiterated that fact that it is now an across the board understanding of all the stakeholder that military solution to Afghanistan turmoil is not an answer.

Pakistan has stressed that now is the time when the United Nations needs to play its role effectively more than it ever has, pointing at the chaotic situation in the Middle East and the rest of the world.

He urged the world to find a peaceful solution toward the sustainable peace of Afghanistan which will ensure the regional stability of South East Asia. One thing which Shah Mahmood Qureshi missed was to shed the light on how Pakistan was abandoned by the world to deal with the AK-47s and Stingers left after the Afghans won against the Soviet Union.

The deep cultural ties of Pashtuns living in the tribal belt of Pakistan with the people of Afghanistan was something which the U.S never took into consideration in the war against terror. It was the same United States which urged the Pakistani Pashtuns to help fight along their Muslim brother in Afghanistan declaring it “a holy war against the foreign forces”. Pakistan has been placed in the grey list of FATF because of Afghanistan issue, hence the historic lesson should have been explicitly given at the forum of the UN General Assembly.

Read more: FM at the UNGA: Shah Mahmood has a busy day ahead…

The Middle East and Role of UN

Pakistan has stressed that now is the time when the United Nations needs to play its role effectively more than it ever has, pointing at the chaotic situation in the Middle East and the rest of the world. “The Kashmiri wife who lost her husband; the Kashmiri schoolboy who lost his eyesight and his future to pellet gun Injuries; the Syrian father who saw his child drown, the Palestinian girl who suffocates under siege, the African migrant willing to risk all for a better life, continue to look to this, the United Nations for support and succor.

Let us not fail them any longer”, were the concluding words of Shah Mahmood Qureshi’s speech at UN General Assembly. The overall content of Pakistan’s official statement at the UN General Assembly presented Pakistan as the responsible member of the body who has an opinion about happenings of the entire world and not just centered to its internal problems. Despite minor instances where a broad representation of narrative could have been better, the speech was overall up to the mark and Shah Mahmood Qureshi, along with his team, deserves the credit for it.

How close was US to attack Iran?