What did Ch. Pervez Elahi offer to Maulana Fazlur Rehman to end protest in Islamabad?

Was Maulana Fazlur Rehman offered Senate chairmanship? Did Ch. Pervez Elahi assure him of Prime Minister Imran Khan’s resignation in the next three months? Was Maulana given anything for face saving or not? 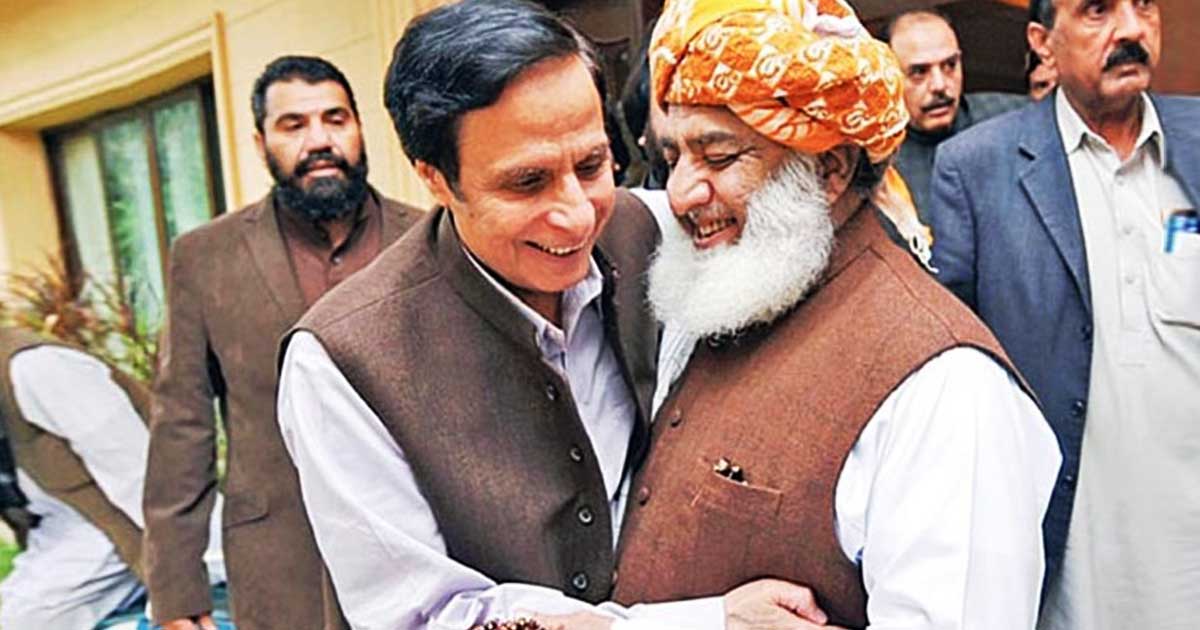 Chaudhry Pervez Elahi, Speaker Punjab Assembly, refused to disclose the agreement reached with Jamiat Ulema-e-Islam-Fazl (JUI-F) chief Maulana Fazlur Rehman to end his sit-in in Islamabad. The Pakistan Muslim League-Quaid (PML-Q) leader said that the agreement reached with Fazl is a secret and he will seek his permission to reveal it. Earlier, there were some reports, suggesting that Mr. Ch had offered the resignation of the premier to Maulana.

The Punjab Assembly speaker advised the government to focus on its work of providing relief to people and said that no one supports opposition’s movement as the job of the opposition to make noise outside and inside the House.

On Tuesday, JUI-F leader Maulana Abdul Ghafoor Haideri had said that the Chaudhry brothers should break their silence and inform the nation about the promise made with his party. Talking to the media, Haideri had said, “Our movement is still continuing, when required we will give a call for Islamabad again.” “The sit-in in Islamabad will be the end of this government,” he had added.

It is important to note that a few days ago, while addressing the PML-Q’s leader, Chaudhry Pervez Elahi, Maulana asked him to unveil the “secret” behind the ending of JUI-F’s Azadi March in November last year. “The secret was that the JUI-F’s sit-in was called off after assurance that the prime minister will resign and new elections will be held after three months,” the Maulana revealed.

The JUI-F chief further said that the party will think about inviting the Chaudhry brothers if they change their position.

Maulana Fazlur Rehman, who apparently failed to get anything ‘substantial’ for his face-saving, said on Thursday that Pakistan Tehreek-e-Insaf (PTI) asked him to call off his Azadi March in return for the post of Senate chairman. The claim could not be verified but sources claim that no such offer was made to Maulana.

He claimed that the government attempted to buy him off by offering him to form a government in Balochistan. “I was also offered the post of Senate chairman,” he claimed. “I thought all the offers being made to me were belittling.”

Maulana who maintains that the protest shall become even harder was not politically relevant after losing his home-constituency during the general elections 2018.

Federal Minister for Science and Technology, Fawad Chaudhry, believes that Maulana has been exposed since the nation stood by a democratically elected government. He spoke to a private TV channel and slammed Maulana for exaggerating the reality.

Professor G.M Pitafi who teaches Politics and International Relations at the University of Management and Technology, Lahore believes that Maulana came to lockdown Islamabad to increase his political capital. “In my opinion, Maulana lost almost everything since he is not part of the present set-up.

Therefore, he behaved like now or never, and fought for his political survival,” he said. Mr. Pitafi also believes that the government is in a better position so there are slim chances of offering anything substantial to Maulana.

After 13-days long dharna in the federal capital, the JUI-F’s chief announced to call it off. While addressing the dharna participants from atop a purpose-built shipping container, on November 14, the politico-religious cleric announced that the protest movement set off by the ‘Azadi March’ would now spread to every nook and cranny of the country as part of ‘Plan–B’ that envisages blockade of “major arteries and highways – and even by lanes and streets”.

Political commentators argue that Maulana brought students of religious seminaries to block roads and put pressure on the government. These students were representative of a particular sect who came to the federal capital because of the orders of their teachers which means it was not a political protest by the citizens.

A political protest is supposed to be a combination of various social groups that come together to demand a particular cause. It is believed that since the JUI-F was not representative of the people at large, hence, there was no pressure on the federal government.