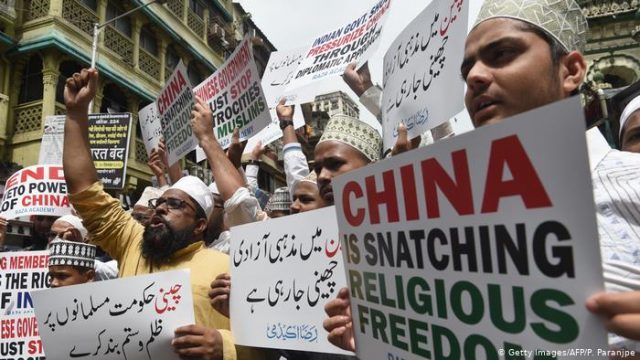 Dispersed all around the world, millions of Muslims undergo terrible atrocities on account of their religion. Following 9/11 the universal image of Muslims association had been hampered enough that subsequently, with the recent growing ISIS activities in the Middle East, various governments monitor Muslims from diverse ethnicities with a watchful eye.

On 10th August 2018, in a committee session of the United Nation’s Elimination of Racial Discrimination, reviewing began on China’s record over recent years in the Swiss city of Geneva. Addressing the issues of growing concerns of violations of human rights for the Uighur community of Western China, Gay McDougall, the vice chairperson of this committee made comments that one million Uighur Muslims are estimated to be in detention in “counter-extremism centers” in China’s far west.

Recently, an official Communist Party newspaper remarked on China’s campaign of pressure against its Uighur Muslim minority has preventing extremism uprising in the Xinjiang region. Moreover, they labeled this approach would lead to a prevention of Xinjiang region becoming the next “China’s Syria” or “China’s Libya.”

With Erdogan’s controversial statement of reconsidering what news disseminates from China, Turkey could most probably encourage China to let investigations be carried out by international journalists in Xinjiang.

Citing reports of mass detentions, the UN anti-discrimination committee raised concerns over China’s treatment of Uighurs stating that, this “resembles a massive internment camp that is shrouded in secrecy”. China’s stance represents this detainment as precautionary measures which were enforced following the attacks by separatists, members of Uighur and Kazakh Muslim minorities in Xinjiang.

Many international sources claim that these people have been arbitrarily detained in indoctrination camps where they are forced to denounce Islam and profess loyalty to the party. Whereas China defends itself by unraveling the true cause of detainment of these people as due to prevailing crimes rooted in extremism.

The official Communist Party newspaper categorized such opinions as, “destructive Western public opinions”, further adding that the need of the hour was “peace and stability” which “must come above all else”. “Through the strong leadership of the Communist Party of China, the national strength of the country and the contribution of local officials, Xinjiang has been salvaged from the verge of massive turmoil,” the newspaper said.

In 2018 the past dealings of Thailand once again gained popularity as the issue of 109 Uighurs deportations from Thailand to China surfaced. All these alleged illegal immigrants termed commonly as refugees worldwide, were escorted to detention centers via Chinese executives. Several videos became viral when these people were seen escorted wearing black hoods covering their heads and their bodies numbered.

Uighur Muslim minority has preventing extremism uprising in the Xinjiang region. Moreover, they labeled this approach would lead to a prevention of Xinjiang region becoming the next “China’s Syria” or “China’s Libya.”

Terming this treatment as a violation of the Human Rights, members of the Uighur Congress and Turkey expressed the dire concerns for the treatment of these alleged illegal immigrants.

Uighurs is a Turkish ethic group residing in East and Central parts of Asia. They make up most of the population of Western part of China, i.e. the province of Xinjiang. This province was categorized as an autonomous region of Uighurs in China in 1950’s. According to the World Uighur Congress, the Uighurs population is around 10 million. They make up a tiny proportion of China’s approximately 1.4 billion mostly concentrated in the region of Xinjiang termed as Turkestan.

These people share ethnic roots with Turkey and other neighboring countries and for decades there has been a low level of Uighur insurgency, where Uighurs claims to be treated differently. They support these claims through comparison with the Hans, another cultural diverse community present in China, in regard to their economic and religious rights being suppressed.

In the region of Xinjiang, security concerns surfaced after the break out of a deadly anti government riot in the regional capital of Urumqi in 2009. Over recent months, monitoring groups and eyewitnesses say Uighurs have been summoned from abroad and across China and sent into detention and indoctrination centers.

Terming this treatment as a violation of the Human Rights, members of the Uighur Congress and Turkey expressed the dire concerns for the treatment of these alleged illegal immigrants.

The fleeing incidents of Uighurs from China to Thailand had caused a rise in the level of concerns for China, Thailand and Turkey. In July 2015 Thailand allowed 172 Uighur men, women and children to travel to Turkey. Acting upon requests of China, Thailand deported 109 Uighurs back to China.

This led to a rise in the protests in Turkey where Rights groups expressed fears that they could face torture. In Turkey’s capital, Istanbul, protesters ransacked the Thai consulate to denounce the decision.

Uighurs and the ISIS

China alleged that these Uighurs crossed the Chinese borders, illegally, in an attempt to land at ISIS recruitment camps. The Uighurs would flee from their Chinese homeland with the help of forged documents, with which they aimed to reach Turkey to join fighting groups of ISIS of Syria and Iraq. Alleged Uighur extremists claimed to be terrorists get their hands on Turkish identity papers via Turkish diplomats, which they use to travel.

In a recent panel discussion with international media, Victor Gao, Director of China National Association of International Studies and Executive of Beijing Private Equity Association stated how China as a country never differentiated among the Hans and the Uighurs. To China all of them are the same. Considering that most of the Uighur population would abide by the law, they weren’t a problem for China and neither were their religious practices.

The political analyst claimed that Uighurs had indeed been involved in such activities prior to these ones. They were seen fighting in collaboration with ISIS against the US and NATO on Afghan borders, as well as in Syria and the Middle East. Even though many countries are concerned with the position of the Muslim Uighurs, Victao Gao shunned all claims of these illegal immigrants being under threat. Furthermore, he congratulated Thailand for its execution of diplomatic relations with China and deport of the Uigurs.

He termed the decision of Thailand, as the cooperation among ‘individual judiciaries’ and ‘decisions among sovereign nations’.

Turkey has never shown any confusion in its ancestral relations with the Uighurs. Many Turkish rights groups expressed their distaste in the decisions taken by Thailand in regard to the depoting of 109 Uighurs. These rights groups trashed the Thai and Chinese Consulate, however, such acts were condemned by Turkey, Mustafa Kibaroglu, Turkish Foreign Affairs Specialist stated in a panel discussion with International Media.

The expert in International Studies further stated how this commenced due to lack of proper information being disseminated. He blamed this on the distortion of messages leading to a negative reaction of the Turkish people.

Uighur Congress spokesperson, Alim Seytoff, and an attorney specializing in Human Rights presented many concerns on behalf of the Uighur community in the common panel discussion. He admit to the actions of the riots on part of the Uighur being true, but at the same time questioned the reservations of China allowing any foreign journalists to cover such issues in Xinjiang.

Furthermore, the president of the Uighur American Association addressed the confusion on part of Uighurs worldwide. He added how the Uighurs felt targeted as a Muslim minority due to the ban on fasting in the Holy month of Ramadan. And lastly he questioned the Chinese for categorizing all the deported people as terrorists? Every man, woman and child?

Over recent months, monitoring groups and eyewitnesses say Uighurs have been summoned from abroad and across China and sent into detention and indoctrination centers.

Moreover, he expressed the distaste in the Chinese government for radicalizing the deported immigrants by covering their heads with black hoods and labeling them with numbers. He opined that even though China claimed to have given provincial-ethnic autonomy to Xinjiang, the country had never really recognized them as autonomous, citing cases of law and constitution recognition, the decisions on part of the Dalai Lama and their categorization of being terrorists.

The Chinese stance is that of alleged peace. All it wants is for legal means to be used to transfer if the Uighurs are truly unhappy with the conditions in China then they should leave via legal means rather than exposing the borders to terrorists by crisscrossing illegally. China wishes that its domestic issues should be allowed to be dealt without any interference from other countries.

What to expect in the future?

Considering that Turkish President, Recep Tayyip Erdoğan, is suspected to fly to China in attempts at undergoing table talks by the end of August 2018, the true situation of what will happen next, will be revealed. Analysts opine that despite the surfacing situation of the Uighurs in the past few years, China has always tried to get rid of terrorists.

And the effect of the matter is that, indeed China is a secular state who has never seen any uprisings on part of any groups and doesn’t plan to see any uprisings in the future. The uprisings were seen on part of the Uighurs in 2009 and they were deported by countries like Cambodia and Malaysia, too.

This is a case of an ongoing debate whether the Uighurs did was right or wrong. However, giving these people the benefit of the doubt one can justify their decisions to flee. But as a solution, Turkey should encourage such Uighurs to lawfully apply for immigration, leaving no excuse for China as Turkey and China agreed to bilateral table talks.

With Erdogan’s controversial statement of reconsidering what news disseminates from China, Turkey could most probably encourage China to let investigations be carried out by international journalists in Xinjiang. This would provide a fresher approach in this matter, let China clarify its stance and truly unveil the real story behind all alleged theories as to who are the Uighurs? Illegal immigrants, refugees or terrorists?