The authors discuss factors affecting Pakistan's tax revenue collection rates. The drop in the tax-to-GDP ratio is due to the economy's loss of momentum, corruption, and the Covid pandemic.

Pakistan is facing problems in tax revenue collection almost from its startup. The country cannot increase its taxpayer base even after a lot of amnesties given by the government. The amnesty given in 1958 and 2000 shows some excellent results. But again, the collection of revenue was not too significant and Pakistan’s budget deficit is on an ever-increasing trend.

Currently, Pakistan is getting $39.7 billion in revenue collection, and in 2019, it was $30.355 billion. In 2017 the government again started giving amnesties and did some monumental work, because in the present scenario, the world is getting tight on non-taxpayers.

The second factor is revenue losses due to continuous tax reforms in Pakistan. During the 1990s the process of trade liberalization resulted in a significant decrease in statutory import tariff rates.

Finally, there is a widespread belief that the quality of tax administration has deteriorated because of rising evasion and corruption; it is stated that the incidence of taxes has effectively decreased. The government needs a policy such as done in 2016-17 to increase the tax base.

The Coronavirus (COVID-19) outbreak has harmed the short-term prospects. It has posed substantial economic hurdles by squeezing the economy’s gains made during the current fiscal year. Fiscal balances, in particular, are projected to be severely strained.

On the one hand, the government is focusing on expanding public health spending and boosting social safety net programs, while on the other, it is attempting to soften the economic effects of the COVID-19. As a result, the budget will temporarily deviate from its original goals.

On the revenue side, meeting revenue expectations, both tax and non-tax, would be difficult because of economic disruption within Pakistan caused by demand and supply shocks. Budget deficits are likely to exceed the FY2020 objective.

The government has intervened in a timely and well-calibrated manner to mitigate COVID-19’s negative impacts. It has implemented adequate fiscal and monetary policies to assist the economy. On the budget front, a comprehensive fiscal stimulus program has been launched in order to accommodate the expenditures required to ease the COVID-19 shock’s impact.

The package has put a strain on fiscal flows; however, if the epidemic continues for an extended length of time, the impact might be catastrophic. The trend in Pakistan since the last ten years in data collection is as follows. 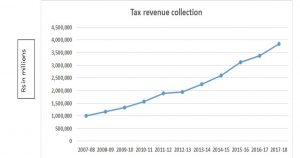 The State Bank of Pakistan has responded in a timely manner by implementing proper monetary policy. The initiatives were targeted at lowering the policy rate and introducing a variety of methods to help small firms enhance their liquidity.

In the aftermath of the COVID-19 crisis, it has implemented a number of other temporary and time-limited interventions to guarantee monetary stability and financial system functionality.

Additional resources have been mobilized through various international financial institutions such as the IMF, World Bank, and ADB to cover the financing needs for these expenditures. The administration is constantly evaluating the situation in the country, and extra measures are being taken as needed to fulfill the new demands.

The current administration in Pakistan is working to implement a tax structure that not only generates enough revenue to meet the government’s needs but also promotes fairness and equity in taxation, lowers the burden of high taxes that distort economic incentives, improves tax enforcement, and promotes efficient and responsive tax administration.

FBR has proposed a number of reforms, special initiatives, and steps all of which are connected with advances in sectoral policies for the benefit of taxpayers. These activities are expected to yield positive outcomes as increased revenue collection, in keeping with attempts to make it easier for taxpayers to achieve the best possible results.

Previous articleHow Cabinet Mission Plan could have changed the history of the world?
Next articleWill Taliban continue their reign of terror after US exit?

31 July 2021
Previous articleHow Cabinet Mission Plan could have changed the history of the world?
Next articleWill Taliban continue their reign of terror after US exit?