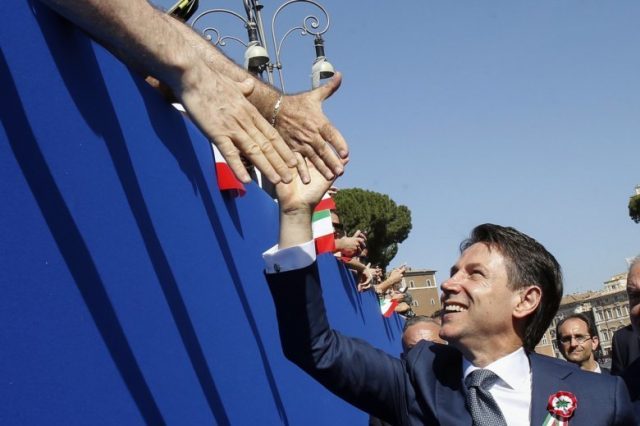 Italy’s anti-establishment Five Star Movement (M5S) and the far-right League party are laboring to agree on a coalition government, with stark policy differences dividing them. Apart from quibbling about who gets what job in a future government, here are facts about what the two players have in common — and more crucially, what they do not:

Both parties strongly reject what they see as the elitist, old-fashioned style of mainstream Italian politics. Between them, they hold a majority in both houses of parliament. They admire US President Donald Trump and Russia’s Vladimir Putin and advocate lifting sanctions against Russia. They both want to lower the retirement age and take a tough stance on immigration.

Matteo Salvini broadened it into an Italian nationalist movement when he took the reins in 2013.

M5S wooed voters with the proposal of a universal basic income. The League said that will create a culture of dependency. The League has since softened on the issue, saying it could accept such an initiative if it remains limited and comes with conditions. The League’s flagship policy is a universal 15-percent tax for all Italian taxpayers and businesses — apparently incompatible with M5S’s costly universal income plan.

The League was founded in 1989 as a northern Italian movement demanding independence from the country’s impoverished south. Matteo Salvini broadened it into an Italian nationalist movement when he took the reins in 2013. But the League still wants greater autonomy for the north to manage its riches.M5S has deep roots in the south, where it has promised to invest heavily.

Although both were originally eurosceptic parties, M5S and the League have since split on the issue of Europe. Salvini advocates renegotiating European treaties, and insists the euro is doomed to fail.M5S leader Luigi Di Maio has made overtures towards the bloc. His MEPs have rarely sided with eurosceptics in the European parliament.