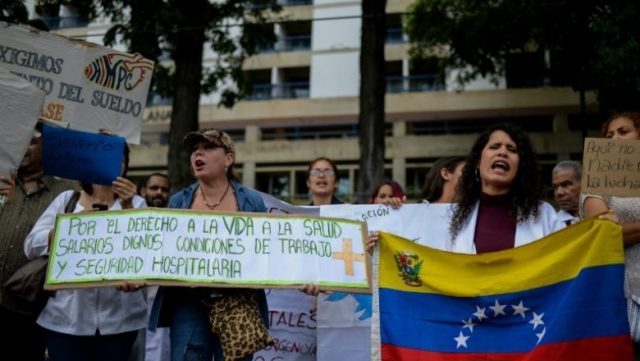 Whether it sparks a social revolution or forces the government to open up the economy, one thing for sure is that Venezuela’s projected one million percent inflation will heap more misery on an already suffering population.

“The revolution has been going on for 19 years now. We’re responsible for the good and the bad,” admitted Freddy Bernal, an influential Maduro ally who acknowledge that “governance has been lost.”

Earlier this week, the International Monetary Fund (IMF) made the stunning projection, adjusting its previous estimate that inflation would hit 14,000 percent to a figure more than 70 times higher.

Already, poverty is reaching unprecedented levels, an estimated 1.6 million people have fled the country, social unrest is on the rise amongst those who stay, salaries have become almost worthless, there are shortages of food and medicine — and yet President Nicolas Maduro clings to power.

“Nothing surprises me,” Marcos Salazar told AFP after being told of the IMF projection as he munched on a hamburger while standing beside a street stall. That burger cost five million bolivars (around $1.5 on the black market), the equivalent to the minimum monthly salary, which is itself partly paid in food vouchers.

They survive thanks to money sent home from relatives who fled the country. Hyperinflation has not only contributed to shortages of food and medicine but also to the collapse of public services, including water, electricity, and transport.

“You can only escape from hyperinflation through a profound reform of economic policy,” he told AFP, pointing to the examples of Germany in the 1920s and Zimbabwe in the 2000s. Poverty climbed to 87 percent in 2017 and extreme poverty to 61 percent, according to a group of leading Venezuelan universities.

They said six out of 10 people claim to have lost on average 11 kilograms (24 pounds) due to hunger. Maduro’s government refutes those numbers, claiming extreme poverty is at only 4.4 percent.

Venezuela, though, is dependent on its oil exports that account for 96 percent of revenues, but output has dropped to its lowest level in 30 years — 1.5 million barrels a day, from 3.2 million in 2008 — according to the Organization of the Oil Producing Countries.

This has prevented the country from benefiting from a recovery in oil prices, while the Maduro government’s decision to print more money due to lack of foreign exchange has provoked economic paralysis.

The IMF justified its projection saying it expects the government to continue printing more money, fueling “an acceleration of inflation as money demand continues to collapse.”

Garcia says that as well as reeling in the expansion of the monetary base, Venezuela needs to boost industry, currently running at 30 percent capacity, and dismantle controls over prices and the exchange rate, which give the government a monopoly on foreign currency.

Attracting funds is another imperative, currently thwarted by United States sanctions against the government and state oil company PDVSA. Venezuela’s economy is expected to contract by 18 percent this year, the third consecutive year of double-digit declines.

Econometrica says the country needs an injection of $20-30 billion a year for the next two or three years to arrest the slide. Despite his re-election on May 20 in a poll widely condemned as a sham by, amongst others, the US and European Union, Maduro faces a battle to hold onto power.

However, political scientist Miguel Martinez Meucci believes there is only one way Maduro’s grip on power will weaken: loss of support from the armed forces, which wield great political and economic power.

“While a social rebellion could precipitate that, the regime is working night and day to smother both,” Martinez Meucci told AFP.

However, there have been rumblings of discontent emerging from within the Chavista ranks, some of whom recently demanded economic reforms. These tensions could ignite during the governing United Socialist Party (PSUV) congress due to start on Saturday.

“The revolution has been going on for 19 years now. We’re responsible for the good and the bad,” admitted Freddy Bernal, an influential Maduro ally who acknowledge that “governance has been lost.”

Maduro announced in a cabinet meeting that an “economic recovery” program involving “monetary reconversion” would commence August 20.  He previously said new bolivar bills with three zeroes fewer would enter circulation on August 4 — a measure already pushed back from June 4 at the request of banks.

Maduro blames hyperinflation on what he calls a “war” against the currency including exporting it to other countries such as neighboring Colombia. His planned reform does not address economic fundamentals, or for example, shifting away from state-led economics.