Who benefits from a locked down Kashmir?

After the martyrdom of Burhan Wani in July 2016, the zeal transformed into passion and the Azadi slogan was chanted passionately. Love for Pakistan and hate for India intensified. What implications will it have for the future of India and Pakistan? 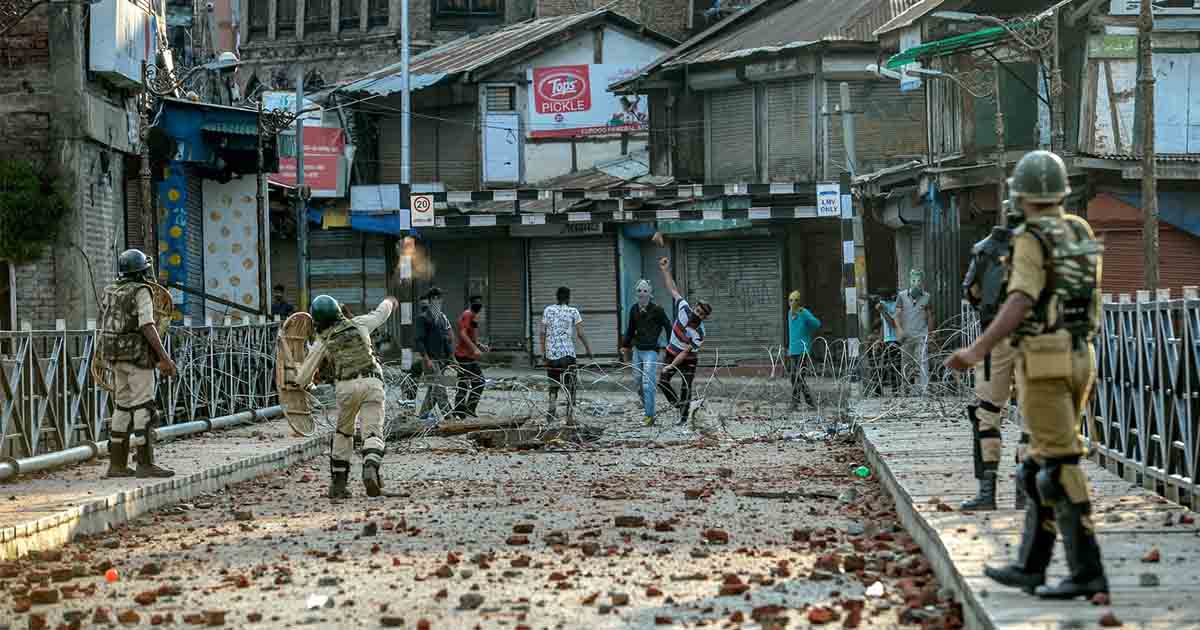 Antagonism between India and Pakistan is a never-ending phenomenon mainly due to unresolved Kashmir dispute. It is the unfinished agenda of partition in 1947 left behind by the British. After three wars, the two archrivals have so far refrained from going for the 4th round due to nuclear deterrence acquired by Pakistan. While India succeeded in gaining time to avoid settlement, the UN tended to ignore India’s evasive tactics and yielded to her gimmickry and cunning manipulations.

India’s antipathy against Pakistan grew phenomenally after Modi took over power in June 2014 and scaled new heights in the aftermath of the Pulwama incident in February this year. The two nuclear states almost came close to a full-fledged war with nuclear overhang when IAF jets dropped bombs in Balakot, but couldn’t cause any damage. Pakistan retaliated by striking three high-value targets inside Indian Occupied Kashmir (IOK), but intentionally avoided physical harm. In the ensuing air duel, PAF downed two Indian jets and captured one pilot.

After three wars, the two archrivals have so far refrained from going for the 4th round due to nuclear deterrence acquired by Pakistan

The second humiliation in quick succession made Modi so mad that he ordered striking several Pakistani targets with Brahmo missiles. The hawks cooled down when Pakistan decided to hit back more fiercely. To avenge mortification, Modi regime took the unprecedented unconstitutional step on August 5. Articles 370 and 35A of the Indian Constitution were repealed and IOK was declared integral part of India.

The reckless act blew to smithereens all the UN resolutions, international guarantees, bilateral agreements and previous decisions of Indian Supreme Court. Since then, the people of Kashmir are locked up in the biggest open jail and subjected to horrendous atrocities committed by Indian forces and RSS.

BJP regime has declared its intentions to carryout ethnic cleansing of Muslim Kashmiris in order to change the demography of J&K and RSS gangs are executing the gory plan. Hindutva fanatics in power are redefining India in every possible way and are carrying out lynching of Indian Muslims. No one knows how the future of South Asia will turn out.

BJP leaders view Pakistan as a thorn in the flesh of India which must be removed. Dreaming of Akhand Bharat, they are repeatedly stating that Pakistan will not exist on the map of the world map in 2025 and it will become part of India.

Pakistan launched a vigorous diplomatic offensive after August 5 to expose the dirty face of India and produced good results, but diplomacy failed to force Modi to lift curfew in IOK and provide succor to the besieged Kashmiris. So far Pakistan appears to be clueless how to go about dealing with the crisis in IOK.

The government is too deeply engrossed in dealing with internal challenges and to tackle blackmailing tactics of IMF and FATF. It has little time to chalk out a strategy how best to deal with the abnormal situation in IOK. While war option is no more feasible for both the rivals due to nuclear factor, for unknown reasons other viable options are not being exercised to checkmate the madness of India.

Stages of freedom movement in Kashmir

The Kashmiris after patiently waiting for over four decades to grant them the right of self-determination as pledged by Nehru and the UN, they ultimately lost patience and picked up arms in 1989. They waged the freedom struggle with motivated zeal against heavy odds. No amount of persecution and torture inflicted upon them by over 700,000 Indian security forces lessened their zeal and resolve to gain freedom from India which had occupied two-third of J&K illegally in October 1947.

Handful of Mujahideen spurred by the Palestinian Intifada and outcome of Afghan Jihad against the Soviets in Afghanistan battled the occupiers valiantly and turned IOK into a bleeding wound of India. Pakistan didn’t exploit the situation since India had become strategic partner of USA after 1991 and Pakistan had fallen from its grace and was put under heavy sanctions.

The other reason was lackluster attitude of the democratic regimes in the 1990s and their fear of Pakistan getting declared a rogue state. The freedom movement received a set back after 9/11 because of new laws framed by USA on terrorism which branded all freedom movements within the Muslim world as terrorism.

Hindutva fanatics in power are redefining India in every possible way and are carrying out lynching of Indian Muslims. No one knows how the future of South Asia will turn out

By portraying Kashmiri freedom fighters as bunch of terrorists abetted by Pakistan, the hands of Pakistan were cleverly tied. Instead of extending support to Kashmiris, Pakistan got fully engaged in fighting foreign supported proxies on its soil. India on the hand was given a free hand to crush the movement in Kashmir and to destabilize Pakistan.

Gen Musharraf in his bid to appease India and USA, signed a peace deal with India in January 2004, stopped movement across the Line of Control (LoC), banned six Kashmir focused Jihadi groups and barred them from using Azad Kashmir (AJK) as an operational base. He allowed India to fence the entire length of LoC. His out of box solution to resolve the thorny Kashmir issue outside the realm of the 11 UN resolutions and his idea to divide J&K into 7 regions and to tackle each one separately divided the 23-party APHC alliance.

These steps took the steam out of the movement and enabled India to put Pakistan on the back foot by making FATA and Baluchistan and later on Karachi restive. One good thing that happened as a consequence to Musharraf’s anti-Kashmir policies was that the struggle in IOK became wholly indigenous.

Read more: Pakistan Went All Out To Highlight Atrocities in Kashmir After India’s Annexation

The Kashmiris once again started protesting at a large scale on the issue of Amarnath land scam in 2008, but changed their strategy from armed to unarmed struggle. In 2010, teenagers and children including girls joined the protests with stones in their small hands and they started Palestinian style intifada with greater zeal.

After the martyrdom of Burhan Wani in July 2016, the zeal transformed into passion and Azadi slogan was chanted passionately. Love for Pakistan and hate for India intensified. The occupying forces not knowing how to handle the surging crowds resorted to cruel methods and used pellet guns to blind the youth and children.

After 5 August 2019, the passion mixed with hate got converted into deep-seated revenge. All shades of Kashmiris irrespective of religious divides have started hating Modi regime. This is altogether a new phenomenon which has never happened before. The Kashmiris are silently expressing their bitterness by refusing to open their shops and do business, to drive transport and to send their children to schools/colleges.

The dead are being buried inside the houses. Day-to-day life stand paralyzed, trade activity and tourism have come to a standstill. Claim of India that the situation is back to normal is travesty of truth. The 30,000 strong band of RSS are busy killing Muslims and raping girls with a view to change the demography of J&K. Non-Muslims are being settled in big numbers.

So far, the spirits of the Kashmiris locked up since 5 August, denied of basic human rights and subjected to worst torture have not dampened. The day curfew is lifted, there is every likelihood of eruption of violence in the valley.

To give vent to their pent up rage, the Kashmiris might once again pick up arms and even resort to suicide attacks, the glimpse of which was seen in Pulwama. If they do so, it would provide an excuse to over 900,000 Indian forces to carryout genocide of Kashmiris and force them to exit from IOK and create a huge refugee problem for Pakistan.

Another possibility which cannot be ruled out is the Kashmiris getting disillusioned and frustrated from Pakistan due to its lackadaisical approach. Such rumblings are already heard in IOK and AJK that the government is doing nothing to save the lives and honor of Kashmiris in distress and to lessen their pains.

Indian psychological operators are already working feverishly to poison the minds of the Kashmiris to convert their love for Pakistan into hatred as they had done in East Bengal, in interior and urban Sindh, in Baluchistan and FATA.

God forbid, if the lava of hatred and revenge gets diverted towards Pakistan, it will have catastrophic effects on Pakistan. Already the rumblings of disappointment and disillusionment are heard in AJK where even the AJK PM is expressing his concerns.

Reliance on False hopes of USA

We naively relied on false hopes given by Trump administration, well knowing that the US and western countries have traditionally been the natural allies of India. The euphoria over Trump’s offer of mediation on Kashmir has evaporated in thin air. It is now amply clear that the US will never take any initiative to please Pakistan at the cost of annoying India.

Under no circumstances our policymakers should make any compromises on UN resolutions, or accepting LoC as permanent border in settling the Kashmir dispute and that too without taking Kashmiris into confidence.

Modi’s misadventure in IOK and his agenda of making India a Hindu state is proving costly. Recently promulgated controversial citizenship law has sparked violent clashes in the northeastern Indian states particularly in Assam. Unrest has spread to other parts of India in reaction to Modi regime’s fascism against minorities and craze for Hindutva. Indian Muslims as well as students have joined the fray.

IOK saturated with troops have become easy targets, while restive India plagued with over a dozen separatist movements and ongoing violent protests has become a powder keg which needs a matchstick to put it on fire.

The ineffective CBMs: The Indo-Pak rivalry will continue!