Why are Pakistanis violating SOPs in the time of COVID-19? A social scientist explains

Pakistanis are not adhering to the SOPs issued by the government to contain the COVID-19 outbreak. Dr. Ahmed Usman of Punjab University explains sociological reasons behind the collective recklessness which has the potential to cause a disaster in the coming days. An important read for all those interested in Politics, Society, and Religion. 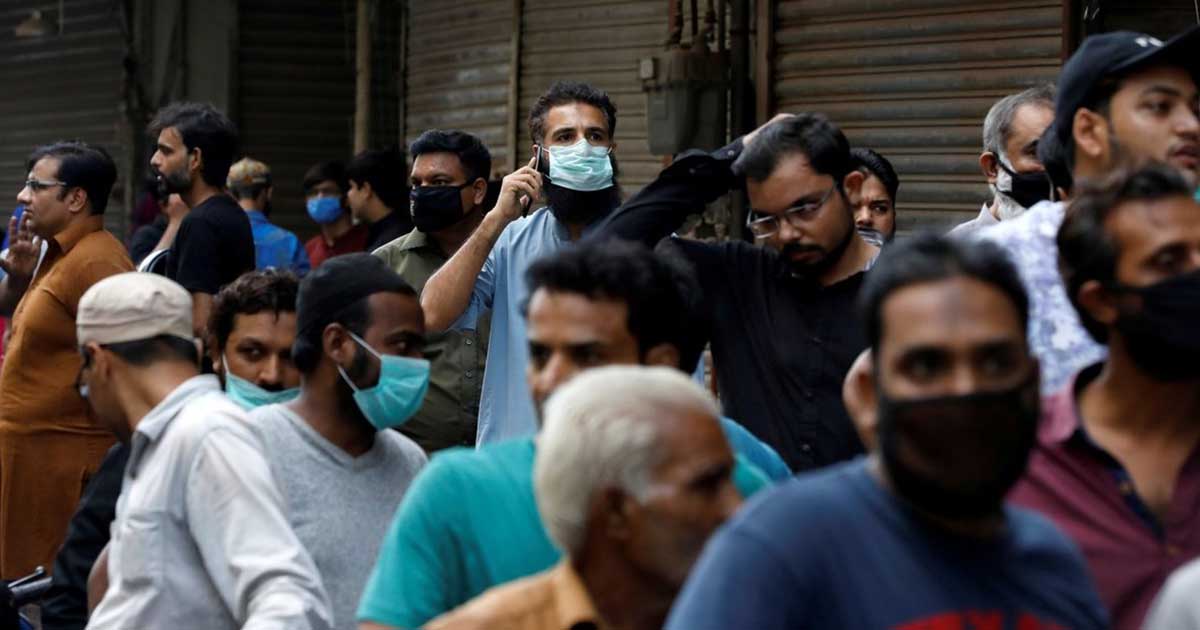 Shibli Faraz, Information Minister and a senior leader of Pakistan Tehreek-e-Insaf (PTI), has urged people to follow the lockdown Standard Operating Procedures (SOPs) formed for the purpose of business activities to prevent the spread of the COVID-19. The minister, with quite upsetting looks, warned people to impose the complete lockdown if they do not care about the SOPs. GVS special report explains why Pakistanis are not following the official guidelines while coming outside to shop for Eid.

That is #Pakistan PM Khan’s constant fear: people dying of hunger during a full lockdown. It is not a matter of lives versus livelihoods. It is a simple equation of lives versus lives. @MehrTarar writes https://t.co/RzYlSS0sc9 #COVID-19— Gulf News (@gulf_news) May 15, 2020

Senator Faraz categorically said that “people should follow the lockdown SOPs during shopping activity. If people didn’t act upon the SOPs, the government will be left with no option but to once more tighten the lockdown measures by shutting all markets, warned Shibli Faraz while speaking on the floor of the Senate.

Earlier, Asad Umar, Federal Minister for Planning and Development, has warned to re-impose the lockdown after reports of people crowding the markets and bazaars were highlighted on the national and international media. “It seems people believe that lockdown has been completely lifted,” the minister said. “Do shop for Eid but, do not put your loved ones in danger. I hope that people would understand the gravity of the situation,” he said.

The number of COVID-19 cases has been on the rise since the country eased the lockdown on May 9. According to the official tally, confirmed cases have increased to 36,717 while the number of deaths has jumped to 788.

Notably, an estimated 2.6 billion people – one-third of the world’s population – are currently are living under some kind of lockdown or quarantine.

Experts suggest that the people who are quarantined are very likely to develop a wide range of symptoms of psychological stress and disorder, including low mood, insomnia, stress, anxiety, anger, irritability, emotional exhaustion, depression, and post-traumatic stress symptoms.

Data from the Pew Research Centre suggest that women, young people, and those with lower incomes, as well as “those whose jobs or income have been cut by the outbreak”, are “more likely than other groups to fall into the high distress category”. New findings on who is suffering most from loneliness in lockdown vary by country. In one recent US survey it is the young, while an unpublished study by Soubhik Barari and others suggests that in Italy it is older people.

To avoid large scale mental health problems, the government decided to allow people to come out and shop for Eid. But the decision is apparently proving to be counterproductive as it has the potential to increase the cases, ultimately leading to a chaotic situation.

Karachi police have reportedly sealed some major markets in the city for blatant violations of the COVID-19 guidelines set by the government before easing the lockdown.

According to a report, the crowded markets and shops in the busiest and most popular shopping areas including the famous Zainab Market were shut down after the shopkeepers failed to follow the safety protocols to prevent the spread of coronavirus.

The Sindh government has introduced an ordinance to ensure the implementation of the COVID-19 guidelines. According to the ordinance, those found violating standard operating procedures (SOPs) and other coronavirus lockdown restrictions will be slapped with a fine of Pak Rs1 million.

Italy, a developed country with a 98.85% literacy rate, introduced laws to stop people from coming outside their homes. According to the new laws, those who violate the containment measures could receive a fine of between €400 (£360) and €3,000 (£2,700); a significant increase from the previous maximum fine of €206 (£187).

In addition, anyone who has been quarantined after testing positive for Covid-19 and “intentionally violates” the order to stay in their home could face a prison sentence between one to five years, according to the decree.

How does a sociologist explain the collective recklessness?

GVS approached Dr. Ahmed Usman, an Associate Professor of Sociology at the Institute of Social and Cultural Studies, University of the Punjab, Lahore, to ask him as to why people don’t follow precautionary measures as advised by the government even during the time of a deadly pandemic.  Dr. Ahmed, who holds a PhD in Sociology from University of Leeds, UK, believes that there can be following reasons behind these categorical violations of official SOPs: “Pakistan is a country with a dwindling economic situation,” says Dr. Usman, “bearing the burden of 24.3% of the people living under the poverty line”. He maintains that “this lockdown posed threats to the survival of poor by confining them in their homes and limiting their work routine”. “Apparently, this is the most obvious reason that compels people to violate the SOPs to ensure their survival and well-being,” he added.

Secondly, Dr. Usman believes that “the Pakistani government appeared to be flexible and soft toned while considering the options of lockdown. The narrative of government was more inclined towards dealing with the poor and jobless people that can exert excessive pressure of poverty on the already deteriorated economic condition of the country. This soft tone of the government and its vague approach furthered the unconcerned behavior of the people towards the lockdown”.

Read More: WHO report on Pakistan: Local transmission of coronavirus shooting up

Moreover, says Dr. Usman, “as per the population statistics of Pakistan in 2019, the rural population of Pakistan is around 64%. The people living in the rural settings or having a rural origin are comparatively less conscious about the hygiene conditions and the prevalence of infections as a result of social gatherings that are a common norm in the rural settings. For them, it is not acceptable to confine themselves inside the four walls of their house for the sake of unseen fear of the disease. The casual attitude of the rural communities in their native towns and during their visits to cities is an important reason in this regard”.

“Importantly,” notes Dr. Usman, “there is a perception in the villages that only physically fragile people catch diseases. They think eating pure food makes them stronger and fit enough to fight out any disease. The myths of being strong encourage them to take risk of going outside”.

While commenting on indigenous cultural discourse as inspired by religion, Dr. Usman notes that: “Pakistani society is generally considered as a traditional society whose fabric is woven with the threads of norms, values, and cultures that are mostly shaped up by the complex theological underpinnings. Societal norms encourage social gatherings and overwhelming ways to express care, grief, and sorrow. The patterns of greetings are further formed as per religious frameworks that yet again emphasizes on kindness, generosity, and warmth ensured through reducing the physical gap between people. Religious rituals including Ibadaat at Mosques and religious congregations are considered compulsory in Islam. With this kind of widespread belief system, people believe that while they are in a state of ablution, no disease can harm them. Arguably, the belief system encourages them to violate the man-made rules of lockdown that they think are baseless and a conspiracy of enemies to weaken the connection between God and them.  As lockdown restricts people from going to mosques and attending congregational prayers, it is considered an enemy’s tool to disconnect true Muslims from thy Lord.”

On the question of youth, Dr. Usman says: “The present era is considered as the youth boom period for Pakistan as 65% of the population is youth. This is the phase of life when the individuals are mostly fearless, careless, and adventurous. A study conducted by Sheffield University revealed that over 50 percent of men aged 19-24 met their friends outside their houses during the pandemic lockdown and 20 per cent have been caught by the police. The majority of those aged 13-24 are not complying with basic hygiene recommendations by health experts such as washing hands for 20 seconds or using sanitizers. Arguably, this can be a possible reason that being the largest part of the population, the youth is less sensitive to obey the instructions due to their fearless and careless attitude.”

Finally, Dr. Usman noted that “the prevalence of pandemic has not played the same havoc to our society as it has done in the countries like USA, UK, Spain, Italy, and China. This is the reason that people are taking it less seriously. Generally Pakistanis are in a state of mind filled with ambiguity and doubts regarding COVID-19’s existence and prevalence in Pakistan.

GVS Special Report compiled by the Editorial Desk with input from Farah Adeed.

Did Maryam Nawaz use religion card to get votes in Gilgit-Baltistan?

PTI rules out alliance with PML-N and PPP