Why China wants to ‘speed up’ CPEC’s construction? 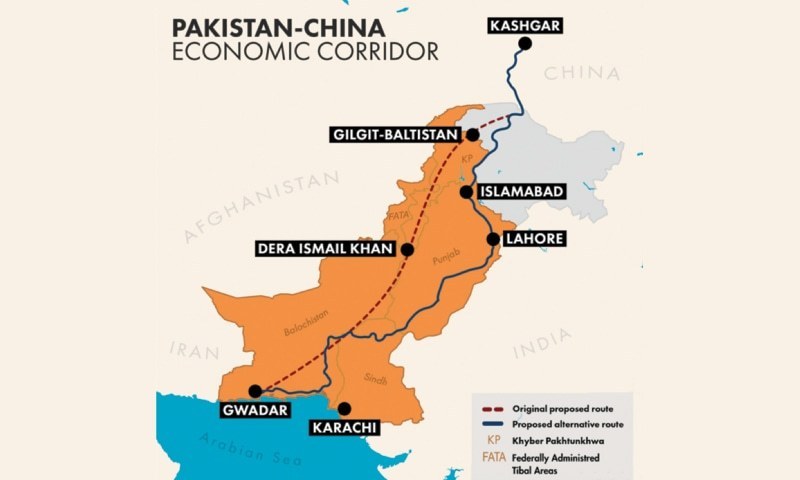 The Chinese President Xi Jinping on Saturday called for pushing faster the construction of the China-Pakistan Economic Corridor (CPEC), according to reports by Xinhua News Agency. Xi made the remarks when meeting with Pakistani Prime Minister Nawaz Sharif who is in Beijing to attend the Belt and Road Forum for International Cooperation scheduled from May 14 and 15. China is selling this project as a way ‘not to shatter the world order but to fix it.’

‘As some western countries move backwards by erecting “walls,” China is contriving to build bridges, both literal and metaphorical. These bridges are China’s important offering to the world, and a key route to improving global governance. Proposed by China, the Belt and Road is for all to enjoy.’

The Chinese desire to expedite the project comes after some speculations were heard regarding China wooing India to also join the OBOR project. Interestingly, Chinese Ambassador to India called CPEC as a project promoting economic cooperation and connectivity in the region.

“OBOR has no connections to or impact on sovereignty issues. Even we can think about renaming CPEC,” he said last Friday.

However, after some concerns from Pakistani quarters, the  Chinese Embassy in New Delhi removed the remarks from the website. This was seen as a reiteration of China’s interest in CPEC, owing to it being a cheap conduit for increasing influence far and wide across regions.

Nawaz Sharif left for China along with Chief Ministers of the 4 provinces on Friday. The two countries have signed several agreements of cooperation in various sectors on the sidelines of the Belt and Road Forum, Radio Pakistan reported. The Memorandums of Understanding (MOUs) were signed in the presence of Prime Minister Nawaz Sharif and his high profile delegation and the Chinese Premier, Li Keqiang.

Radio Pakistan gave out the following details regarding the MOUs signed on Saturday:

There is also discussion that China is to invest $50 billion into developing dams on the North Indus River Cascade, which would have potential to generate 40,000MW hydro electricity.

According to the statement issued by the Prime Minister Office, PM Sharif fully committed Pakistan’s support for One Belt One Road (OBOR) vision. Besides, he reaffirmed the resolve to complete CPEC related projects at the earliest.

It would be pertinent to add here that CPEC construction is being done at an unprecedented and fast pace. According to an extensive research carried out by Chongyang Institute for Financial Studies at the Renmin University of China, the project has made great strides.

The visit is seen by pundits as a step towards further strengthening the entente in Sino-Pak relations with CPEC lying at its heart. Speaking to media earlier, Federal Minister Ahsan Iqbal said that CPEC is the flagship project of One Belt One Road Summit. “CPEC is the first and the most important bilateral initiative of this forum,” he remarked.

He said that a number of agreements and MoUs related to CPEC projects are also expected to be signed on the occasion. He said the signing of an agreement on CPEC important project for Gwadar Eastbay Expressway is planned.

Read more: To Win from CPEC: We must revise our trade policies…

Ahsan Iqbal further told that signing of the agreement of Pakistan’s Railway’s ‘up gradation of ML-1 project’ is also planned. “It will help in rehabilitation & up-gradation of Karachi-Lahore-Peshawar to Landi Kotal (ML-1) Railway Track” he added. He said that implementation of this project will allow an increase of train speed up to 160 kilometers per hour.

Getting CPEC done fast and its effects on the region

It would be pertinent to add here that CPEC construction is being done at an unprecedented and fast pace. According to an extensive research carried out by Chongyang Institute for Financial Studies at the Renmin University of China, the project has made great strides.

“After the assessment, we found that the construction has been unexpectedly fast. Four key areas of cooperation — energy, transport infrastructure, industrial cooperation and Gwadar Port — have made significant progress. Among them, electricity and infrastructure have seen smooth development.”

Despite misgivings, the project is being completed at a smooth pace. However, there are factors that strategists need to deliberate including continuing hiccups, Saturday morning attack that killed ten workers in Gwadar is symptomatic of these. Different attacks to stop CPEC’s progress will continue to happen – whether these are due to foreign hands or local Baloch separatists that do not wish the region to progress it will never be clear.Ony on Thursday Daniel Coats in his address to the Senate Committee mentioned how CPEC would be a lucrative target for militants.  However, China and Pakistan, are both on the same page with the understanding that CPEC will be going ahead regardless of such hindrances.

Read more: CPEC’s vulnerabilities: Can Pakistan carve a way out?

Given the Indian concerns about CPEC infringing their sovereignty, the significant progress on the project may add to tensions between India and Pakistan. A security threat could emerge if confessions of Kulbushan Jadhav are to be believed

CPEC is a very important project for China and Pakistan. The former wants a cheaper and faster route to expand its strategic clout in the region and intrude into the Middle East. Gwadar will also provide the Chinese navy access to the Indian sea and Gulf straits. Most importantly it reduces its trade reliance on the Straits of Malacca, which always stands the risk of blockade from the US.  With Chinese growth rates slowing down, China also faces a massive surplus capacity in steel, cement and machinery  which it needs exported to sustain internal growth and stabiity. All these projects under OBOR provide it a pressure valve. OBOR is seen as a way for Chinese growth to propel itself in the next decade.

The NYT has called it ‘a more audacious version of the Marshall Plan.’ China’s plan also starkly contrasts with President Trump’s ‘America first’ policy on trade and is expected to help China increase its political and economic leverage around the world. During the World Econmic Forum in January, President Xi condemned pursuing protection as ‘locking oneself in a dark room.’

Pakistan on the other hand, despite being the second fiddle is likely to derive many benefits, most important of them all is the creation of employment opportunities, as a trade transit route it will receive billionsof dollars which will over the long term help with its fiscal deficit.

Given the Indian concerns about CPEC infringing their sovereignty, significant progress on the project will add to tensions between India and Pakistan. Pakistani concerns over alleged Indian attempts to threaten CPEC could emerge if confessions of Kulbushan Jadhav are to be believed. As a protest, India has boycotted the Belt and Road Forum, which most of its neighbours are attending.

Previous articlePakistan, Afghanistan and the US Joins hands to fight Daesh in the region
Next article8 habits that keep you poor

24 July 2021
Previous articlePakistan, Afghanistan and the US Joins hands to fight Daesh in the region
Next article8 habits that keep you poor

After MOAB, USA reveals GMD: Which state will be used as the test ground?