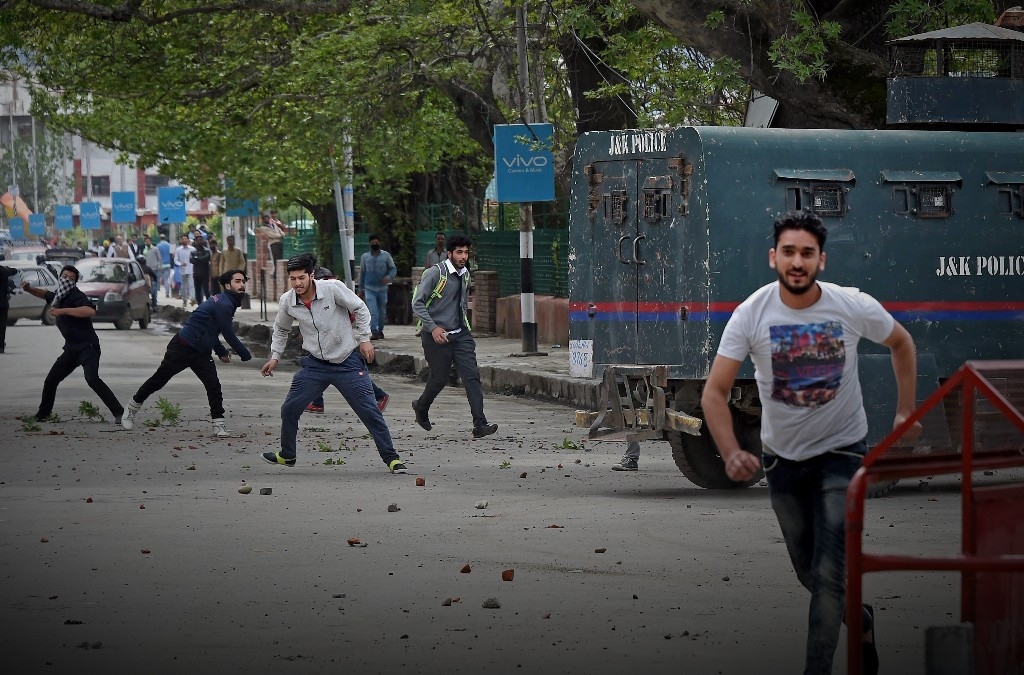 Today, the trend lines for Jammu & Kashmir are quite troubling, to say the least. Nearly a year after Indian security forces killed Burhan Wani, a young Kashmiri militant with a large following, anger hasn’t abated. Tension has risen in recent days after a video surfaced on social media that appeared to depict Indian security forces using heavy-handed tactics against a civilian. On April 24, assailants gunned down a local politician in Kashmir, Abdul Gani Dar. Students have regularly clashed with security forces.

When Jammu & Kashmir Chief Minister Mehbooba Mufti met Indian Prime Minister Narendra Modi and Home Minister Rajnath Singh this week, according to local media reports, New Delhi declined her call for a dialogue process to begin right away, suggesting that such an idea was unrealistic “while there is stone-pelting and militant violence.”

Deepening tensions in Kashmir could further aggravate frayed relations between India and Pakistan. Delhi could denounce Pakistan for orchestrating the unrest, while Islamabad could lambast Indian security forces for their brutalities.

In effect, Kashmir has never been a bigger nuclear flashpoint than it is today. And yet, the world has said or done relatively little in response. To be sure, recent tensions have generated banner global news headlines, as well as a scathing New York Times editorial.

Still, on the whole, the international community has paid the simmering Kashmir dispute little to no mind. A logical question – and certainly one to which Pakistanis incessantly demand an answer – is why.

First, there are too many other crises convulsing the globe that are perceived by the West to be of more direct relevance. In the United States, the Trump administration confronts a dizzying array of foreign policy challenges, from Russia and Syria to China and especially North Korea.

It’s quite simple: Washington accords the most attention to issues that affect it the most. And Kashmir doesn’t make the cut. Threats to U.S. treaty allies in the Indo-Pacific and concerns about terrorist attacks on U.S. interests register more emphatically on the radar than do concerns about a faraway, localized dispute – even one with nuclear dimensions.

Second, Pakistan, the one major player fervently attempting to attract the international community’s attention, has failed to do so. Several reasons may explain why.

One is that Islamabad lacks regular access to global forums that it can use as a platform to highlight Kashmir for a world audience. On the few occasions when it does enjoy such access – such as at the annual United Nations (UN) General Assembly meetings – its plaintive calls for more focused attention on Kashmir have largely fallen on deaf ears.

Consequently, many within the international community are hard-pressed to sympathize with Pakistan’s complaints about Kashmir. And the few nations willing to formally support Pakistan’s position on Kashmir (hello Beijing) aren’t about to launch global advocacy campaigns on Islamabad’s behalf.

Not A Dispute Many Want To Wade Into

Given how ugly and messy and complex the Kashmir dispute is, most nations won’t want to touch it with a ten-foot pole.

Third, even if the dispute made its way on to the international community’s radar, it’s hard to imagine any country wanting to wade into it. Yes, candidate Trump on the campaign trail and President-Elect Trump in a bizarrely convivial telephone conversation with Pakistan Prime Minister Nawaz Sharif suggested that he welcomed the possibility of mediation. So did Nikki Haley, the U.S. ambassador to the UN. But we should treat such pronouncements as conciliatory rhetoric, not statements of intent. They also likely referred more to addressing India-Pakistan tensions in general than to Kashmir specifically.

Given how ugly and messy and complex the Kashmir dispute is, most nations won’t want to touch it with a ten-foot pole. Great Britain, Russia, the U.S., and any other potential mediator won’t be interested – unless their involvement were framed as trying to get the two countries to talk more broadly, and not about Kashmir.

Another factor here – one particularly salient with Washington, given its intention to strengthen relations with India – is not wanting to antagonize New Delhi by opting to formally intervene in a dispute that New Delhi believes is strictly off-limits to outsiders. Can the international community’s relative silence on Kashmir also be attributed to deft diplomacy by Delhi to secure the agreement of global actors not to speak up about the issue?

That’s certainly a possibility. However, Indian diplomats posted in the West are already working on many high-priority matters. India’s high-level direct interactions with the Trump administration so far have engaged a full plate of issues, from defense cooperation and the H-1B visa program to a possible trip to Washington by Prime Minister Narendra Modi.

Read more: Kashmir: A crisis the world wants to ignore

We can assume that the relative lack of global attention to the Kashmir crisis has more to do with factors tied to the international community than to any diplomatic lobbying efforts carried out by India.

The takeaway is that the world won’t be clamoring to help ease tensions in Kashmir. This means the world could eventually find itself in a difficult position if the unrest were to increase and explode, and especially if it were to bring India and Pakistan to the cusp of another conflict. Then, at this point, external actors may feel compelled to play the role of a firefighter – to try to defuse tensions and bring a dangerous situation under control.

If there’s a silver lining here, it’s that Washington has excelled when playing the role of crisis manager in the India-Pakistan dispute. Analyses of two recent case studies – the Kargil conflict in 1999 and the border confrontation in 2001 after an attack on India’s Parliament building – demonstrate how U.S. mediation efforts helped de-escalate tensions.

As a general rule of thumb, pre-emptive efforts to forestall conflict are more prudent than reactive, crisis-period interventions. And yet, in recent years at least, the U.S. has managed to pull the latter off relatively well on the subcontinent.

In an ideal world, key local stakeholders in Kashmir and authorities in New Delhi would take matters into their own hands and find the right incentives to establish some sort of dialogue that brings a measure of calm.

Sadly, we don’t live in an ideal world. There’s good reason to believe that with neither the international community nor actors in the region willing or able to make a difficult situation better, extended – and deepening – tensions are all but inevitable.

Michael Kugelman is deputy director and senior associate for South Asia with the Asia Program at the Woodrow Wilson International Center for Scholars in Washington, DC. This article was first published in Bloomberg Quint and has been reproduced with permission. The views expressed in this article are the author’s own and do not necessarily reflect Global Village Space’s editorial policy.

Previous articleWhy do we buy more stuff than we need?
Next articleFacebook vs Real Life

25 September 2021
Previous articleWhy do we buy more stuff than we need?
Next articleFacebook vs Real Life

Azam, Malik star as Pakistan go one up in the Independence Cup