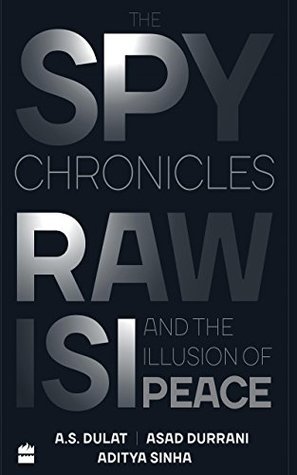 Some term them untold; few call them old wine in a new bottle. The significance of the much-talked-about ‘Spy chronicles’ may not be much, had ousted PM Nawaz Sharif not created a controversy when he declared that Pakistan was responsible for 2008 Mumbai attacks.

Maybe no one would have even paid heed to this book. But, the timing of the book announcement is suspicious. It appears to be a well-orchestrated effort to divert the debate from politicians to military-establishment.

It reflects upon a touching story pertaining Durrani’s son who got caught at Mumbai Airport for visa violation only to be released after Dulat’s interference who spoke with the then RAW chief Rajinder Khanna to set him free.

Who can make this effort better than the friends in India? After all, he never uttered a word against Indian state or Kalbushan Yadav in his tenure as a PM. The Parliamentary Special Committee on Kashmir remained in self-inflicted slumber.  No one dared challenge the ‘bloody hegemony’ of the Indian forces in the disputed territory, during Nawaz’s time in the office.

A counter-attack was due. A friend in need is a friend indeed. Indians apparently chose to stand by at the time of adversity. Timing was spot-on. With less than two-months to general elections, the publication of ‘Spy chronicles’ has brought a fierce criticism from disgruntled former premier Nawaz Sharif.

Though it failed to create much uproar on both the sides of the border, nevertheless,  PML-N’s supreme leader has made efforts to bring this in limelight to ignite the debate on the issue.

DG ISPR Gen Asif Ghafoor tweeted that statements attributed to Durrani in the book are being “taken as a violation of Military Code of Conduct applicable to all serving and retired military personnel”.

It makes Durrani’s case at odds with Nawaz’s case because Nawaz pitched everything to reveal everything and damage Pakistan to generate help from outside.

Ex-military officials, particularly former President General (retd) Pervez Musharraf on many occasions spoke about his military engagement and made many revelations which became front-page headlines. But he was never asked to appear in GHQ to explain his position.  Circumstances are different which may have demanded the explanation. The book in question comprises of series of interviews of Retired Lt Gen Asad Durrani and former RAW chief A.S. Dulat with Indian journalist Aditya Sinha.

Mutual respect between the two spies brought them on a united forum to have a conversation with a journalist. It reflects upon a touching story pertaining Durrani’s son who got caught at Mumbai Airport for visa violation only to be released after Dulat’s interference who spoke with the then RAW chief Rajinder Khanna to set him free.

ISPR’s decision to tweet on the matter in current political climate is a countermeasure to stop the barrage of comments and negative publicity on the matter.

Nawaz faced the brunt of media and wider public criticism over his comments. He was bashed for arranging an interview with a controversial journalist at a crucial juncture to undermine Pakistan’s institutions. Apparently, it was planned in advance and a calculated risk was taken to generate a case for himself in the international community. He purposely chose the newspaper and the Cyril Almeida who was the man behind Dawn leaks-I.

When denied a bailout internally, Nawaz was seeking help from the international establishment at the cost of national embarrassment.  What could be a better way than bashing Pakistan’s military to impress the Western empires looking to neutralize Pakistan’s Army?

The significance of the much-talked-about ‘Spy chronicles’ may not be much, had ousted PM Nawaz Sharif not created a controversy when he declared that Pakistan was responsible for 2008 Mumbai attacks.

Nawaz was willing to avail a chance.PPP’s Senator Raza Rabbani also questioned Durrani’s motives to publish a book, when Indo-Pak relations are at all-time low.

Why can a person from a military background not be termed traitor when he also pours out state secrets? Nawaz questioned the institute’s policy. He demanded National Security Council (NSC) to reconvene on the matter as it had in his case. NSC had termed Nawaz’s statement incorrect and misleading.

Nawaz drew the parallels between the two issues. But army rebutted back. Its decision to put the ex-spymaster on Exit Control List (ECL) and initiating a formal Court of Inquiry headed by a serving Lt Gen has taken many by surprise. It’s difficult to say if this is eyewash.

This book may not have brought the secrets which were already unknown to many. But it created a situation where the military had to make a statement that Army is taking the matter seriously and no one in the county is above the law or the institutions.

The backlash to Durrani’s controversial decision to publish a book with enemy number one ex-spy chief was natural. Words were carefully chosen to avoid any damage. It makes Durrani’s case at odds with Nawaz’s case because Nawaz pitched everything to reveal everything and damage Pakistan to generate help from outside.

Durrani owns his words. Nawaz did not. He defended himself and denied the implicit and explicit meanings of his carefully crafted words. The military’s probe will decide Durrani’s fate. But Nawaz’s defensive tactics led to his deplorable exit from Pakistan’s political scene after these damaging revelations.

Timeline of recent attacks in Iran by militant groups

Can Russia put an end to western hegemony?

Match-fixing in Pakistan cricket: a reality that continues to haunt