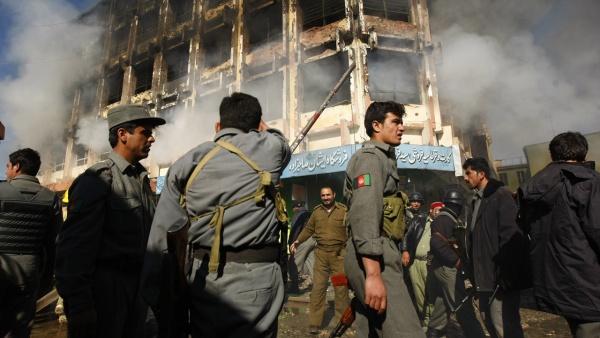 Adam Kinzinger, a Congressman from Illinois has asked President Trump to resume air strikes inside Pakistan at alleged terrorist hideouts, which are stoking trouble in Afghanistan.

The Express Tribune quoted him as saying “get back to some real tough love when dealing with Pakistan.”

Such urges are not new from American politicians as time and again they have stressed on the “do more” rhetoric.

The US has already started to twist Islamabad chiefly due to the ever-worsening situation in Afghanistan. There has been a $190 cut in financial aid to Pakistan this year by the Trump Administration.

The Drone and Aerial campaigns were one of the mainstays of the Obama Administration while dealing with Pakistan. It was done on the pretext of the presence of troubling elements inimical to US war efforts.

Kinzinger said that pressure must be exerted on Pakistan to take stern measures against terrorism. ”Ultimately we have to make it clear that we are going to cross the border if necessary because they are not doing enough.”

Here it must be stressed that the US has already started to twist Islamabad chiefly due to the ever-worsening situation in Afghanistan. There has been a $190 cut in financial aid to Pakistan this year by the Trump Administration. It has proposed $344 million in financial assistance to Pakistan including $100 million in foreign military funding, a massive $190 million reduction in the grant as compared to the 2016 fiscal year.

In addition, in order to further squeeze Islamabad the administration has proposed the $800mn – a cut of US $100 million compared to the previous time – in its annual budget proposals under the Coalition Support Fund (CSF), a Pentagon program to reimburse US allies that have incurred costs in supporting counter-terrorism and counter-insurgency operations.

Ties between the two countries are anything but healthy at a time when close cooperation is required to reach a negotiated end to an otherwise unwinnable war in Afghanistan.

The US has linked the disbursement of aid to Pakistan with actions against the Haqqani Network, something which has been oft-repeated by the US and vehemently denied by Pakistan.

The US has again iterated Pakistan’s half-hearted drive to end terrorism.

“The Department recognizes the significant sacrifices the Pakistan military has made in the fight against terrorism and appreciates Pakistan’s continued support for the transit of materiel to coalition forces in Afghanistan.”
– US Deputy Secretary of Defense

“Disbursement of the remaining US $350 million requires the Secretary of Defence to certify that Pakistan has taken sufficient action against the Haqqani Network. The Secretary has not yet made a decision on certification,” Stump said.

Trouble in Afghanistan: Pakistan must worry

Al Jazeera reported that the responsibility of the blast was accepted by the Taliban. The blast took place around 8:30 am on Saturday near a stadium and bus station in Khost City.

“Eighteen people were killed and 10 people injured, including two children. The target of the attack was Afghan police and US forces, but most of the victims were civilians.”
– Mubariz Zadran (a spokesman for the governor of Khost province)

This is indicative of Taliban’s brazen rise and the incapability of the security apparatus in dealing with them. The Taliban are holding about 58% of Afghan territory and are attacking Afghan and foreign forces with impunity. After the deadly attack on 209 corps headquarters last month which claimed lives of 150 Afghan soldiers, the Taliban carried out two attacks on military installations in Kandahar this week claiming the lives of 25 soldiers.

The US has been forced to mull over a new policy for Afghanistan in light of the deteriorating situation.

The US is thinking of a military-heavy policy option to turn the tables in Afghanistan since it employed the GBU 43 bomb against IS last month in Nangarhar. A change in policy was deemed indispensable and necessary because of Taliban’s swift and bold resurgence. There have been many deliberations and statements but Lt Gen McMaster is the first senior official who clearly talked about the new policy applying to Pakistan also.

“And so what we’ll have at the end of the next few weeks here is an opportunity for a much more effective strategy for the problem set in Afghanistan, Pakistan, and the region broadly,” Gen McMaster told a White House news briefing earlier this month.

The reference to Pakistan came days after the Intelligence top brass in the US cast aspersions on Islamabad’s commitment to fighting against terror.

In a statement to the Senate Select Committee on Intelligence, Director National Intelligence, Daniel R Coats alluded to the threats emanating from Pakistan to its neighbors and the United States.

Taliban’s war-waging capability has got a new bite and hence they continue to take swathes of territory; they are a military and a political force much stronger than the unstable Afghan government.

Thus we can expect the US to browbeat Pakistan. There is every possibility that the US might up its drone and aerial campaign to target alleged camps in FATA. Further, the US could also put pressure on Islamabad to eliminate suspected training camps of Jihadi outfits like Lashkar-e-Taiba. This is possible given what Gen McMaster said earlier about not allowing territories to be used by rogue nonstate actors.

Gen McMaster said he would stress the need for “all of us have to be committed to achieving our fundamental objectives in Afghanistan,” which is never to allow extremists to use that country once again for launching terrorist attacks.

If these briefings are anything to go by then the US could very well carry out limited military actions inside FATA to pluck out hostile elements to US war efforts in Afghanistan. Concomitant to these would be the threat of sanctions on the pretext of Pakistan’s acquisition of Tactical Nuclear Weapons (TNWs), something which was addressed by Daniel Coats in his statement. In all, the policy shift could adversely affect Pak-US ties in the near future without altering the Afghan situation in favor of the US.

The US has to understand that healthy relations with Islamabad are essential for its extrication from the Afghan swamp. There is an old military saying that never reinforce a failure. The US, besides lacking strategic acumen, employed a wrong war-fighting concept against the warring factions in Afghanistan. Disproportionate force application did little to target the Taliban’s center of gravity. The results are conspicuous and there for all to see. Taliban’s war-waging capability has got a new bite and hence they continue to take swathes of territory; they are a military and a political force much stronger than the unstable Afghan government. It is difficult to hope that a military surge would compel the Taliban to come back in the fold especially when the mainstay of their resurgence is their resistance to foreign intervention. Indeed, if the 2010-upsurge is any guide, then this new policy is likely to be counterproductive.

In order to cultivate the support of Islamabad, the US has to distance itself from purely bilateral matters between India and Pakistan. A good start can be taken if the US ends its opposition to TNWs.

The US has to support an Afghan-owned and Afghan-led peace process if it wants a negotiated end to the war in Afghanistan. Needless to say, it has to engage Islamabad and assuage its fears vis-à-vis Afghanistan. Pakistani concerns are well documented and elicit from its long-held fears of encirclement through Indian influence in Kabul.

Read more: The intelligence top brass warns the US of increasing “Afghan Trouble”

In order to cultivate the support of Islamabad, the US has to distance itself from purely bilateral matters between India and Pakistan. A good start can be taken if the US ends its opposition to TNWs. The US concerns on an issue which only deals with New Delhi does not go down well with Islamabad. Trump’s statement of sympathy for India in the Riyadh Summit will make many in Islamabad less at ease. A Washington-Islamabad tiff is the last thing that a peaceful Afghanistan wants.