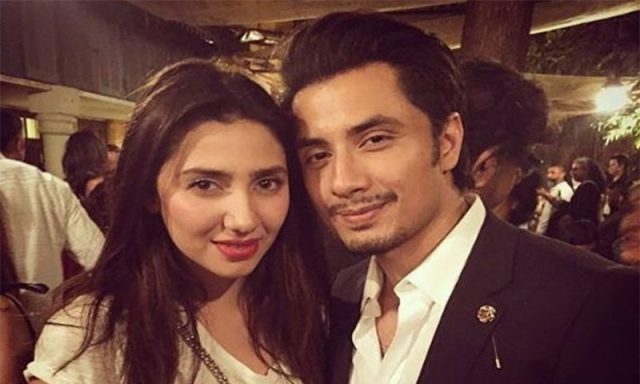 Amid the ongoing Meesha-Ali controversy, two female witnesses from Ali Zafar’s musical band came forward with their statements, rejecting the allegations made by the ‘Jugni’ singer Meesha Shafi against Ali Zafar.

The two women, Aqsa Ali and Kanza Munir, in their separate statements defended Ali Zafar and stated that they were present at the Jam sessions Meesha Shafi is referring to, but they did not witness Ali Zafar transgressing his boundaries.

The witnesses also said they have been working with Ali Zafar for a considerable amount of time and have traveled with him on international visits, yet they did not find Ali Zafar behave in any manner that could have been deemed as sexual harassment, either with them or any of his female followers who approached him for pictures or autographs.

Aqsa Ali said, “As a woman and a musician, I have to talk about this issue. Meesha said that her conscious doesn’t allow her to say quite – so does mine.” She added that she has traveled with the Channo singer and seen girls “throw themselves” at him, but he has always made sure to be friendly and not make anyone uncomfortable.

“At this particular jam session, I was present as a vocalist. So were Farhan and the entire band along with the event organizer. We had a great jam session. As a woman, if I would have felt that there was any sort of misconduct, I would be the first person to take a stand,” explained Aqsa.

She also mentioned that Meesha Shafi and Ali Zafar were not left alone for a single moment during the hour-long practice session. Kanza Munir added wrote, “I have been working with Ali for past three years and I stand witness to this particular incident that Meesha has quoted.”

“I have spent hours jamming with Ali on different tours which have been pleasant and professional. It’s important that this movement is not taken for granted or misused for personal reasons, stealing the limelight from real cause,” she explained.

They added that it was quite uncomfortable for them to stay quiet as Shafi’s statement is nothing but a lie. Ali Zafar’s mother defended his son saying, said that “a man also has a family just as a woman does. For me, both genders are equally respectable. Just like a woman, a man also has respect and dignity.”

Pakistan’s singing sensation Momina Mustehsan also gave her two-cents on the issue and asked Ali Zafar to apologize if he thinks he has ever disgraced any woman, even unintentionally. She said no one is an angel but one must strive to become a better person.

Still waiting for u to respond @AliZafarsays. Do u think u have ever, knowingly or unknowingly, violated a woman in any way or form? https://t.co/CS2fYHpWN8

In an interview with a local publication, Meesha Shafi said she remained quiet for so long because she was not ready to speak about her experiences.

She said her silence was eating her inside. The recent controversy of Patari CEO and many brave girls speaking against this issue gave her the courage to share her experience publically.

“The first and foremost reason is that I’m ready. I have started talking to people and divulging my experience. I’m finding it hard on my conscious to stay silent any longer than this because I’m seeing such brave girls and women speaking up – not just around the world – but here as well.

I have to say, by the way, I salute these girls,” she adds, referring to the girls who spoke about former Patari CEO Khalid Bajwa. “It’s not easy. They are not public figures and I think it can be harder for me, in a way, but it’s hard for everyone. The more I think about it, the more I realize that if I don’t go public, nothing will change. It was eating away at me.”

Ali Zafar has categorically denied all the allegations as he is preparing legal proceedings against Meesha Shafi.

New research shows that number ‘zero’ was invented in Pakistan…

Aziz Ansari responds after being accused of sexual harassment