Kashmir and humanity continues to bleed under an unprecedented curfew that continues after 42 days. Global powers took active interest to resolve East Timor and South Sudan, far more complex issues, why these powers continue to appease Modi's fascist regime? Writer raises a question to which there is no easy answer. 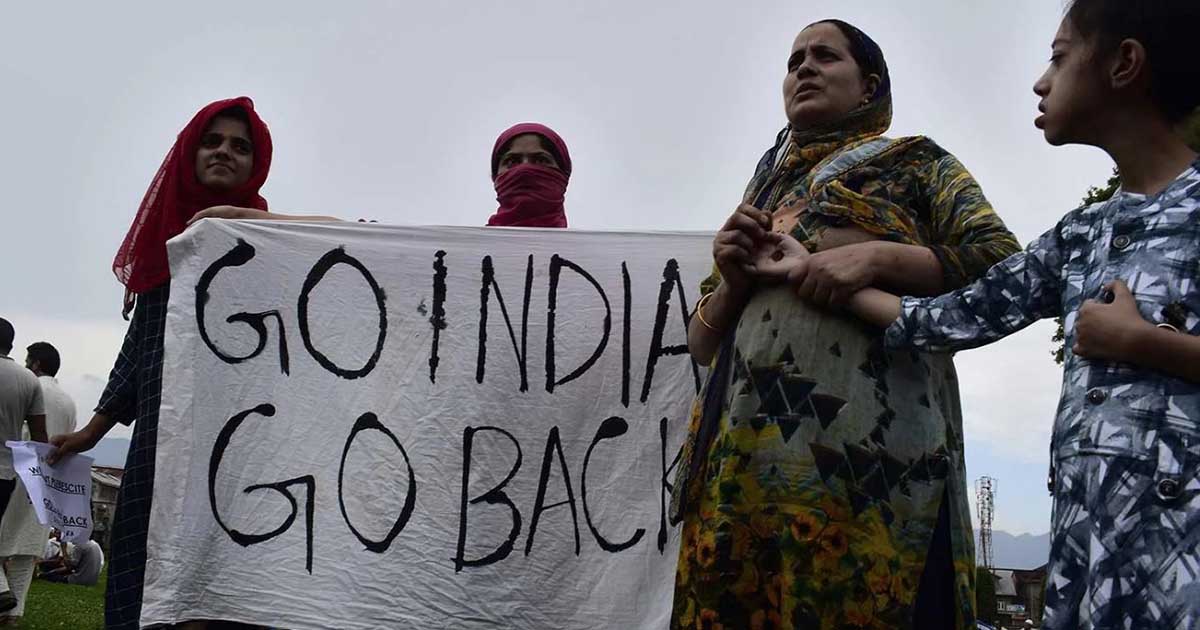 It has been more than a month since occupied Kashmir has been under siege of the merciless Indian forces. The persisting extremely volatile situation in Indian occupied Kashmir (IoK) where men, women, and children are being brazenly maimed and obliterated, where unparalleled human rights abuses are being blatantly committed by the day, and where people are being held incommunicado from the outside world has so far not been able to make any impact on the hearts and minds of the insensitive civilized world.

The truth of the matter is that the wailings and pleas of the viciously battered people of the occupied territory seem to have fallen on deaf ears of the vociferous world community; proclaimers of peace, civility, and democracy in the world.

Around 300 people from the Kashmir Valley – including politicians, students, teachers, businessmen & lawyers – have been detained in jails across UP.

People are being shifted to jails in other parts of India because the ones in Kashmir are “full”. https://t.co/EyJtAdgpmE

The unrelenting round-the-clock curfew imposed in the awe-inspiring occupied territory by the brazen Indian forces, under diktats from none other than the despotic government of Indian premier Modi, has brought life to a complete standstill in the valley; businesses have totally closed down, public transport has conspicuously gone off the roads, and medical aid, particularly for the diseased and the injured, has become totally inaccessible.

Unambiguously, the situation in Indian occupied Kashmir is getting worse by the hour, not by the day. What, however, is mindboggling is the incorrigibly feeble response of the world community, the international Human Rights organizations, and above all the United Nations (UN) and the U.S. towards the rapidly deteriorating Kashmir entanglement.

India must realize, the sooner the better, that the Pakistani nation has stood by the people of occupied Kashmir for over seven decades now

Why this glaring apathy, particularly of the UN, the U.S., and the other powers that be, towards the ongoing inordinately critical Kashmir situation? Thus far, whatever has been stated vis-à-vis the deteriorating Kashmir issue by the UN, the U.S., and the other world powers and the Islamic world is mere rhetoric. Nothing concrete has been said or done to reflect seriousness of the world community to sincerely and assertively address the Kashmir problem; a problem that, the world knows, has every potential to explode to a catastrophic magnitude and cause unparalleled devastation not only to the two nuclear powers-India and Pakistan but also  the region and, perhaps, the entire world.

The United Nations Security Council (UNSC), after its closed-door consultative meeting on the issue of Jammu and Kashmir, held on August 16, 2019, did say that Kashmir is a disputed territory and that it is not an internal matter of India, as claimed by the Indian government. The UN Secretary-General, António Guterres had also emphasized the need to resolve this issue in accordance with applicable Security Council Resolutions and the Charter of the United Nations. The US did say that it is seriously perturbed by the deteriorating Kashmir situation and that the matter should be resolved through dialogue between India and Pakistan.

I commend the 58 countries that joined Pakistan in Human Rights Council on 10 Sept reinforcing demands of int community for India to stop use of force, lift siege, remove other restrictions, respect & protect Kashmiris' rights & resolve Kashmir dispute through UNSC resolutions.

Some of the Islamic countries also expressed the same concerns, as the U.S. and other world countries, regarding the serious developments taking place in IoK. But that was all about it. Nothing tangible has so far been said or done by the international community that could be termed as significant and that would resolve the Kashmir conundrum once and for all. The only country which came out strongly and vociferously on the issue was none other than Pakistan’s time-tested and all-weather ally, China.

As a matter of fact, the UNSC consultative meeting on Jammu and Kashmir was called on China’s request. As reported by a leading English newspaper of the country, “Only one of the five permanent members, China, openly favored Pakistan.” The remaining four permanent members Britain, France, Russia, and the US only desired India and Pakistan to address the Kashmir dispute in a bilateral set-up, the report said.

The awfully feeble stance of the UN and the US in particular, and the world community in general, vis-à-vis occupied Kashmir, reflects nothing but their hypocrisy in resolving issues of international consequence. This can be lucidly gauged from some commendable actions taken by the world body, the U.S., and the other powers that be, in the past, on issues of international significance as equally important as the ongoing Kashmir issue.

East Timor is the first case in point. A quick glance of the history of East Timor will unfold the facts that led to the independence of East Timor from Indonesia. As reported in the international media, many countries of the world including Australia effectively looked the other way, prepared to appease Indonesia because of its size and power in the region. In 1978 Australia’s prime minister, Malcolm Fraser was the first to recognize Jakarta’s de facto annexation. But the UN condemned it out-and-out and called for an act of self-determination. The crucial role that the United Nations (UN) played in getting East Timor ultimately freed from the clutches of Indonesia cannot be overemphasized.

Will the UN, backed by the US and the other world powers, set its foot down and prevail on India to urgently hold a plebiscite in occupied Kashmir

In the 1990s, a combination of the independence movement gaining strength, growing worldwide pressure and political reform in Indonesia led to a UN-sponsored referendum on independence on 30 August 1999.  The historic ballot saw 78% of East Timorese vote for independence. Unambiguously, the UN played a persuasive role and prevailed on Indonesia to grant right of self-determination to the browbeaten people of East Timor.

The second case in point is South Sudan. It gained its independence from the Republic of Sudan in 2011. This made it the newest sovereign state to have emerged on the map of the world in the 21st century, with widespread recognition. How sustained and effective was the role of the United Nations Security Council in supporting the Sudan People’s Liberation Movement/Army?

"The UN Human Rights Council…must address the warning signs of a looming catastrophe."

As reported in the international media, “the Security Council, by its resolution 1590 (2005) of 24 March 2005, decided to establish the United Nations Mission in the Sudan (UNMIS) to support implementation of the Comprehensive Peace Agreement signed by the Government of Sudan and the Sudan People’s Liberation Movement/Army on 9 January 2005; and to perform certain functions relating to humanitarian assistance, and protection and promotion of human rights. UNMIS provided good offices and political support to the parties, monitored and verified their security arrangements and assisted in a number of other areas, including governance, recovery and development. South Sudan became an independent state on 9 July 2011, following 98.83% support for independence in a January 2011 referendum”.

Thus, it can be dexterously concluded that the role of the United Nations with regard to the independence of both East Timor and South Sudan has been inordinately crucial. Strongly backed by the powers that be, the world body, one must admit, played a pivotal role in helping these two subjugated nations gain independence from the clutches of their subjugators. The UN unambiguously played its role remarkably well and steadfastly upheld its mandate of ensuring enduring peace and justice in the world.

In the backdrop of the circumstances portrayed above, one is perplexed to appreciate why the UN, the US, and the other world powers are so averse to deal with the issue of Indian occupied Kashmir (IoK) with the same passion and conviction with which it pursued and ultimately resolved the East Timor and South Sudan imbroglio. Doesn’t this reflect their double standards? The resolution of the issue of Indian held Kashmir (IhK) should, to my mind, be much easier and justifiable than East Timor and South Sudan for the UN and the powers that be. Why is it so? It is because Indian occupied Kashmir already stands declared as a disputed territory under the UN Resolution of 1948, which proclaims that the issue of occupied Kashmir has to be resolved in accordance with this significant Resolution of the world body, by granting right of self-determination to the people of Kashmir.

Brutalities being committed by the treacherous Indian forces in IoK continue unabated.  It has crossed all bounds of civility. The ever-belligerent Indian government, headed by a ludicrous and hot-headed person like Modi, is doing everything in its power to suppress the freedom movement of the gallant Kashmiri people. Emboldened by the insensitivity of the UN and the world powers’, India has audaciously and blatantly rejected the UN Resolution of 1948 on occupied Kashmir. It is on a confrontational mode with Pakistan, for providing political, diplomatic and moral support to the movement of the Kashmiri people. India must realize, the sooner the better, that the Pakistani nation has stood by the people of occupied Kashmir for over seven decades now.

Kashmir has been under lockdown for more than a month. But the conflict has a decades long history. Here is a look at the crisis in India-administered Kashmir in numbers pic.twitter.com/pTsNo4BPPC

It will continue to stand by them till its last breath and till the last drop of its blood, no matter whatever the consequences. Will the UN, backed by the US and the other world powers, set its foot down and prevail on India to urgently hold a plebiscite in occupied Kashmir as was done in the case of East Timor and South Sudan?  The sooner this is done the better it would be not only for the two volatile nuclear powers India and Pakistan, who are at the verge of a potential nuclear standoff, but also for the region and, perhaps, for the entire world.

The writer is a political analyst and freelance columnist based in Islamabad-Pakistan. Views in this article are author’s own and do not necessarily reflect GVS policy.