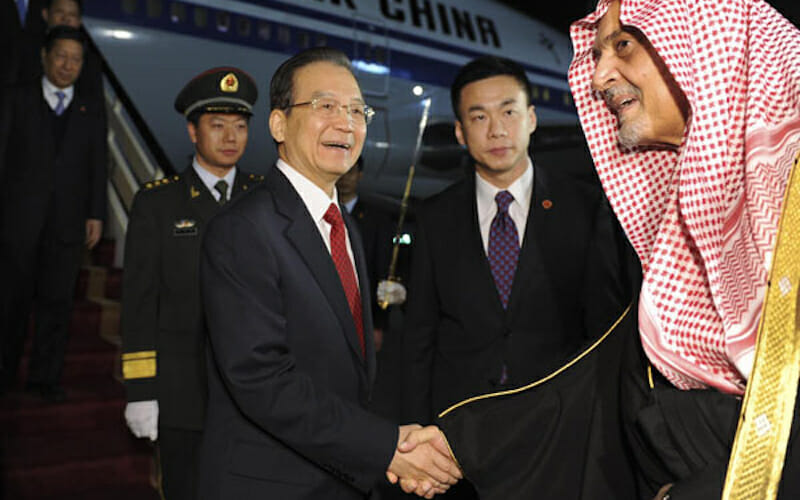 Chinese efforts to woo Saudi Arabia’s ethnic Chinese community highlight the People’s Republic’s effort to avert criticism from the Muslim world of its crackdown in the north-western province of Xinjiang and strengthen relations with the kingdom and Middle Eastern nations.

The efforts to woo a community, a significant part of which is of Turkic origin, identifies itself as Turkestani, and long supported greater rights, if not independence for Xinjiang’s Uyghur population, are part of a larger, long-standing global Chinese effort to ensure the support of a mushrooming Chinese diaspora not only for its policy in Xinjiang but also for its anti-Taiwanese One China policy and growing economic and geopolitical influence.

“Tukestanis…do not identify as ‘Chinese in the ethnic, cultural or even geographic sense. Parts of this cluster perceive themselves…as being part of an oppressed group whose homeland is currently under Han occupation,“ said Muhammed Al-Sudairi, a Saudi China scholar and author of a recent report on the Chinese efforts in Saudi Arabia.

In wooing Saudi Arabia’s ethnic Chinese community, China is targeting a group that not only historically supported the Uyghurs but also maintained close ties to Taiwan. Mr. Al-Sudairi estimated the Saudi Chinese community to number at least 210,000, 150,000 of which have lived in the kingdom for decades.

It is a community that played a significant role in Saudi Arabia’s propagation of Sunni Muslim ultra-conservatism in China, part of a four-decade-long global campaign to counter post-1979 Iranian post-revolutionary zeal that more recently with the rise of Crown Prince Mohammed bin Salman is being curbed and given a more moderate makeover.

China this week sought to tighten relations with the Arab world with the allocation of US$106 million in aid to troubled nations, including Palestine, Jordan, Syria, Yemen and Lebanon and the creation of a US$3 billion joint Chinese Arab fund that would invest in transportation infrastructure, oil and gas, finance, digital economy and artificial intelligence.

China announced the financial initiatives at a moment that it was putting the brakes on funds it pumps into its infrastructure-driven Belt and Road initiative that aims to connect Eurasia to the People’s Republic. The slowdown was designed to ensure that the initiative does not become a drag on the Chinese economy.

The book was published in the kingdom and distributed locally as well as internationally as part of Saudi Arabia’s global propagation of ultra-conservatism.

China’s Xinhua news agency meanwhile reported that President Xi Jinping would visit the United Arab Emirates this month on his way to a BRICS (Brazil, Russia, India, China, South Africa) summit in Johannesburg. Mr. Xi visited Saudi Arabia, Iran, and Egypt in 2016, the first visit to the Middle East by a Chinese head of state in seven years.

Chinese concern about Uyghur sentiment is compounded by the revival in post-Soviet Central Asian nations of pan-Turkism, a movement that emerged in the late 1900s that aims to unite Asia’s Turkic people. Kazakh president Nursultan Nazarbayev sees pan-Turkism as a pillar of his country’s national identity.

Quoting Mufa Kemal Ataturstak, the visionary who carved modern Turkey out of the ruins of the Ottoman empire, Mr. Nazarbayev told a gathering in Ankara in 2012 that “the time will come when all the Turks will unite. Therefore I want to greet all the Turkic-speaking brothers. Between Altai and the Mediterranean Sea, over 200 million brothers live. If we all unite, then we will be a very effective force in the world.”

Pan-Turkism’s appeal in Central Asia, boosted by what Russia’s annexation of Crimea could mean for other post-Soviet states, does not stop at the borders of Xinjiang. The Altai mountains, Mr. Nazarbayev referred to is where Kazakhstan, China, Mongolia and Russia meet.

Days earlier, Mr. Nazarbayev signed a decree renaming the southern region of Shymkent as Turkestan, a reference to what pan-Turkists see as their spiritual homeland.

China announced the financial initiatives at a moment that it was putting the brakes on funds it pumps into its infrastructure-driven Belt and Road initiative that aims to connect Eurasia to the People’s Republic.

The rise of pan-Turkism puts China’s recent focus on Saudi Arabia’s Chinese Turkic community in a class of its own. China sought to boost its efforts by appointing in 2013 Anwar Habibullah, one of China’s few Uyghur diplomats as consul general in the Red Sea port of Jeddah.

The consulate, since Mr. Habibullah’s appointment, conducts events not only in Mandarin and Arabic but also Uyghur, according to Mr. Al-Sudairi.

Mr. Al-Sudairi attributes the focus on the Saudi Uyghurs, one of the largest and wealthy Chinese Turkic diaspora communities, “to the role of this community as a stronghold for anti-Chinse and anti-CPC (Communist Party of China) sentiment in Saudi Arabia, and one that has had some influence in shaping Saudi elite and popular perceptions toward the PRC (People’s Republic of China) and CPC.”

The Chinese focus is also fed by the country’s determination to stem the influence of what it terms extremist thought, including Saudi-inspired ultra-conservatism, that was promoted by Saudi ethnic Turkic Chinese through their contact with Uyghur pilgrims and the distribution of literature and, audio-visual materials in Xinjiang, often through governmental non-governmental organizations like the Muslim World League, a major vehicle in Saudi Arabia’s global propagation of ultra-conservatism.

Mr. Al-Sudairi’s portrayal of Saudi Turkic sentiment and its impact on perceptions of China in Saudi Arabia is noticeable given the fact that the kingdom, like almost all Muslim states, has turned a blind eye to China’s crackdown in Xinjiang and systematic attempts at forced assimilation of the Uyghurs.

Muhammad Amin Islam Turkestani, a strident Uyghur advocate of Xinjiang independence helped shape Saudi perceptions and propagate nationalism in his homeland after settling in the kingdom in the mid-1950s. Mr. Turkestani served as a translator for Uyghurs performing the haj and hosted a one-hour Uyghur-language show on Saudi radio in the 1980s.

Mr. Xi visited Saudi Arabia, Iran, and Egypt in 2016, the first visit to the Middle East by a Chinese head of state in seven years.

Funded by the Saudi Turkic community, Mr. Turkestani published a book, A Message to the Islamic World … Facts about Muslim Turkestan, that criticized Han supremacism and denounced communist rule. The book was published in the kingdom and distributed locally as well as internationally as part of Saudi Arabia’s global propagation of ultra-conservatism.

Mr. Turkestani’s book, according to Mr. Al-Sudairi, influenced Saudi discussions and perceptions and complicated the kingdom’s relations with China before and after Saudi Arabia in 1990 became the last Arab state to officially establish diplomatic relations.

Saudi Arabia, however, while at times critical of Chinese policy in Xinjiang, ensured that the plight of the Uyghurs did not fundamentally affect official relations.

The country’s controlled media were at times allowed to raise the issues and senior religious scholars called for support of the Uyghurs, Mr. Turkestani’s campaign to get the Muslim World League to recognize East Turkestan went however unheeded.

Moreover, no senior Saudi scholar has issued a fatwa or religious opinion on the issue. “Uyghur persecution by China will not stop the Saudis’ engagement with China, nor even slow it down,” said prominent China scholar Yitzhak Shichor.

The Chinese effort to woo Saudi ethnic Turkic Chinese is being spearheaded by the United Front Work Department, the main communist party unit tasked with reaching out to key non-part groups in China and across the globe, including Saudi Arabia.

“In January 2018…Politburo member and former Foreign Minister and State Counsellor, Yang Jiechi, told the National Overseas Chinese Conference that the government should expand and strengthen ‘Overseas Chinese Patriotic Friendly Forces’ in the service of the ‘Great Rejuvenation’ of the Chinese nation. In plain language, what this means is that overseas Chinese should be persuaded, induced, or in extremis, coerced, into accepting allegiance to China as at least part of their identity,” said Bilahari Kausikan, a former Singapore diplomat and chairman of the National University of Singapore’s Middle East Institute, in a recent speech.

“This is leading China into very complex, indeed dangerous, territory. China’s navigation of the complexities has in many cases been clumsy,” Mr. Kausikan said, noting that the policy had led Chinese diplomats to openly interfere in the domestic politics in for example Malaysia.

“Since my retirement, I have traveled extensively in Southeast Asia, Central Asia, and the Middle East. Complaints about similar behavior by Chinese diplomats and officials are all too common in all these regions; in fact, so common that it is becoming somewhat tiresome to listen to them,” Mr. Kausikan said.

Dr. James M. Dorsey is a senior fellow at the S. Rajaratnam School of International Studies, co-director of the University of Würzburg’s Institute for Fan Culture, and co-host of the New Books in Middle Eastern Studies podcast. James is the author of The Turbulent World of Middle East Soccer blog, a book with the same title as well as Comparative Political Transitions between Southeast Asia and the Middle East and North Africa, co-authored with Dr. Teresita Cruz-Del Rosario,  Shifting Sands, Essays on Sports and Politics in the Middle East and North Africa, and the forthcoming China and the Middle East: Venturing into the Maelstrom

Coronavirus reaching Pakistan: Can Pakistan fight it like China did?