Zainab culprit to be produced before Anti-Terrorism Court today 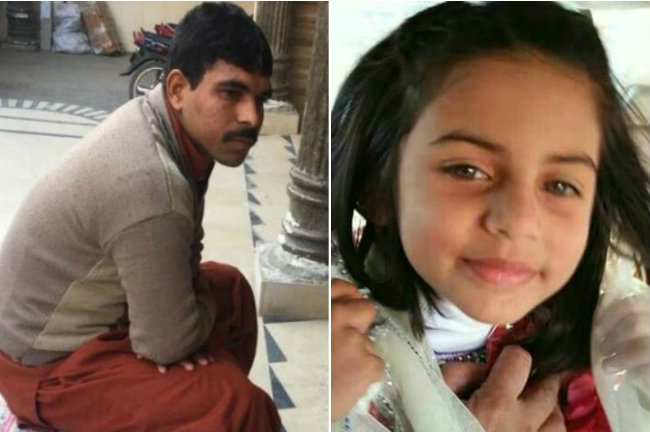 The main culprit in the Zainab murder and rape case will be produced before the Anti-Terrorism Court (ATC) today. The chief justice of the Lahore High Court (LHC) ordered daily hearings of the Zainab case starting from today. The culprit, 24 year old Muhammad Imran, was arrested by the Punjab police yesterday. He faces the charges of murdering 8 girls in the Kasur district.

The police will submit a report related to the accused in the court. The culprit, Imran, resided in the same neighborhood as Zainab. He used to frequently visit Zainab’s home. When Zainab was going to her aunt’s house for religious tuition, Imran intercepted her and convinced her that he will take her to meet her parents. Zainab was abducted on 3rd January and then her violated and abused dead body was found in a trash heap on 9th January.

The need of time is not for revenge but introspection as a nation and the promulgation of new laws that do not aim to punish but to prevent tragedies like the one that transpired with Zainab.

Imran was apprehended two weeks ago by the police but Zainab’s family assured the police that it can’t be him and he was released. The DNA samples matched Imran yesterday and police took him into custody from Pakpatan. The Chief Minister of Punjab Shehbaz Sharif announced Imran’s arrest in a press conference yesterday. “Zainab’s murderer has been caught.

His name is Mohammad Imran. He is a 24-year-old resident of Kasur…he is a serial killer,” stated Shehbaz. He said that Imran confessed to all his crimes and Zainab’s father wants the culprit to be publicly hanged. Shehbaz promised that the culprit will be punished severely so that no other girl will be crushed the way Zainab was crushed.

Read more: Zainab’s father not allowed to react after daughter’s killer was caught

Yesterday, the Senate Standing Committee on Interior recommended an amendment to Section 364A of the Pakistan Penal Code (PPC). They proposed the addition of public hanging as the punishment for abduction, abuse and murder of children less than 14 years. This was made in an attempt to fulfil Zainab’s father’s demand of hanging the culprit publicly and to create fear among the people who bear such ill intentions.

If it were not for the social and electronic media, Zainab would have become another name in the long list of innocents who have been killed and raped by monsters like Imran.

The public hanging of Zainab’s murderer is out of question for now because there is no such punishment in the Pakistan Penal Code for any crime. The parliament might make an amendment to add such a section in the PPC but it will do very little to deter individuals in the future. The changing of a law will not improve the efficiency of our law enforcement agencies nor guarantee the safety of our children.

The purpose of any punishment is to create deterrence among people to follow the law, not to seek revenge. While Zainab’s rape and murder is one of the most despicable examples of the malevolence of human nature, seeking revenge from one culprit is not the answer to the problem.

It should be a moment of reflection for the whole nation that seven girls were raped and murdered by the same culprit but the police failed to take any action. If it were not for the social and electronic media, Zainab would have become another name in the long list of innocents who have been killed and raped by monsters like Imran. She would have become another statistic like all the children before her who never got justice. The need of time is not for revenge but introspection as a nation and the promulgation of new laws that do not aim to punish but to prevent tragedies like the one that transpired with Zainab.

News Desk - 22 April 2021
I have been attached with preparation of Central Superior Service (CSS) exams for years. The wonderful journey has taught me a lot of things....