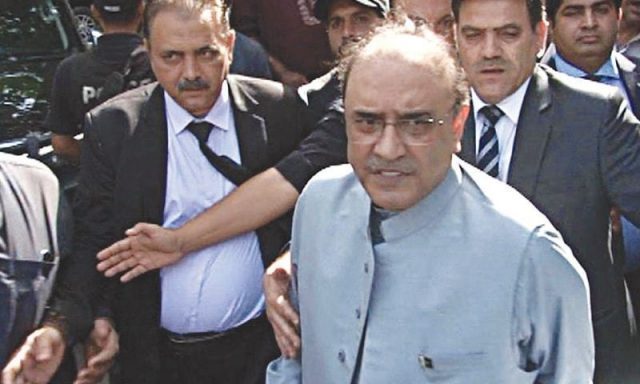 Pakistan Peoples’ Party (PPP) co-chairperson Asif Ali Zardari and his co-accused sister Faryal Talpur appeared before the accountability court in Islamabad on Monday, 8th April in the money laundering through fake accounts case which has had the PPP leaders in the doldrums for the past few months.

The siblings reached the accountability court amid strict security. Special arrangements were made for their appearance and as many as 2,000 police personnel and 200 personnel from Punjab Rangers were deployed both inside and outside the court, local press reported.

In an unforeseen plot-twist, during the proceeding chaired by Judge Arshad Malik of the Panama case, two women, Kiran Aman, and Noreen Sultan, who were named as accused in the case, said that they were ready to testify as witnesses and had even filed an application before NAB Chairman Javed Iqbal.

Zardari described Nawaz Sharif as a nobleman and himself as a humble one. He added that the establishment should be asked about the trial of former military dictator Pervez Musharraf.

The judge asked NAB to verify whether the two women had filed a request. Judge Malik asked the women to submit their written requests before the court. Both the accused had filed applications before the court saying they could not afford to engage defense lawyer. The court then adjourned the hearing till April 16.

Speaking to journalists in the court, former President Asif Zardari said he was seated in the same chair the ex-premier Nawaz Sharif used to sit in during his trial in the Al-Azizia and Flagship Investment references. Zardari described Nawaz Sharif as a nobleman and himself as a humble one. He added that the establishment should be asked about the trial of former military dictator Pervez Musharraf. The court marked the attendance of the accused persons and ordered the distribution of copies of the reference among their lawyers.

The case was adjourned till April 16. Meanwhile, police arrested two female workers of the PPP from outside the federal judicial complex as they were trying to enter into the accountability court to witness the appearance of their leaders.

Justice for Haleema: Bahria University Students take to the streets

Will Shehbaz Sharif finally return to Pakistan on June 11?