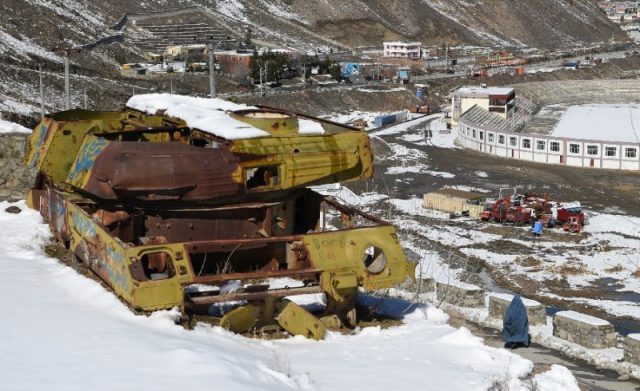 The last time Abdul Karim saw Soviet forces he was a teenage mujahideen fighter shivering on an Afghan mountainside, clutching his Kalashnikov and wondering if winter or the Russians would bring death first. “But then I heard (mujahideen commander) Ahmad Shah Massoud over the walkie talkie saying the Russians had withdrawn, and we could come down,” Karim told AFP in Afghanistan’s legendary Panjshir Valley, where the Red Army was bled into retreat.

It would be several more years before the Soviets left Afghanistan for good on February 15, 1989 having suffered the loss of 15,000 men — many in the unforgiving mountain passes of Panjshir. But for Karim, peace was short-lived — Afghanistan fractured into a ruinous civil war, and the young fighter was back on the frontlines.

Sitting atop a Russian tank abandoned on the roadside, Mirza bitterly recalled the violent legacy that trailed the vanquished Soviets.

Thirty years later, Afghans who experienced the bloody aftermath of the Soviet withdrawal fear a repeat of that chaos as another invader — the United States — negotiates an exit from its longest war. The parallels are not lost on veterans whose dogged resistance brought a superpower to its knees.

It was in the stronghold of Panjshir, north of Kabul, that Massoud lured the Soviets into high, narrow mountain passes where his loyal mujahideen lay in wait. Massoud, dubbed the “The Lion of Panjshir”, is venerated not just in the valley — where his mujahideen rebuffed nine Soviet offensives — but across Afghanistan, where he is a celebrated national hero.

His death at the hands of al-Qaeda assassins, two days before September 11, 2001, is mourned every year and is marked by an official holiday. The road through Panjshir is punctuated by towering images of his likeness and the rusted skeletons of Soviet tanks, helicopters and heavy guns — “a graveyard of empires”, another former mujahideen, Mohammad Mirza, told AFP.

Three decades on, talk of Massoud’s military cunning — outmanoeuvring tanks and fighter helicopters through ambush and attrition — still evokes immense pride from his devoted foot soldiers. “Nine times they tried (to take the valley), and nine times they failed,” boasted another former mujahideen, who asked not to be named because he is now an Afghan police commander.

The road through Panjshir is punctuated by towering images of his likeness and the rusted skeletons of Soviet tanks, helicopters and heavy guns.

Flicking open his phone, he scrolled through grainy photographs of his younger self at a feast with fellow mujahideen after the Red Army’s capitulation. “Of course we celebrated, like all countries celebrate their great victories,” he said, gazing wistfully at the photos.

“But always I remember those we lost. I cannot forget.” Wali Mohammad was 14 when he joined the mujahideen. He said every anniversary was “a reminder that anyone who invades this country will face the same fate”. But the victory was bittersweet: it failed to deliver the lasting peace that has eluded Afghanistan for four grinding decades.

“After the Russians left, we were sure peace was coming. But our neighbours, and regional powers, had their own agendas,” the 52-year-old told AFP. Karim, today burly and with a snowy beard, was also circumspect about the mujahideen’s fabled victory, even before a crowd of admiring young Panjshiris reared on tales of their invincibility.

“We were happy that one enemy had left, but we also knew that war was not over,” Karim said, twirling prayer beads and dressed in a traditional wool ‘pakol’ hat and heavy scarf to shield him from the cold.

Overlooking a sweeping ravine, the corroded hulk of a Russian troop carrier lies semi-submerged in snow, spray-painted with a rousing slogan: “Long live Afghanistan. Death to the Taliban”. Panjshir, with its fierce warriors and natural defences, was largely spared the violence that plagued Afghanistan after the Soviet expulsion, and remains one of its most peaceful provinces.

Flicking open his phone, he scrolled through grainy photographs of his younger self at a feast with fellow mujahideen after the Red Army’s capitulation.

But the looming prospect of a US withdrawal and Kabul riven with infighting and uncertainty as the Taliban takes centre stage, has stoked worry that history could repeat itself. Massoud’s son, Ahmad, said his father “had his doubts” about the haste of the Soviet withdrawal, fearing the country was too divided and the government too weak to keep Afghanistan together.

Read more: Could the U.S face the Soviet style defeat in Afghanistan?

“He was concerned that this might actually lead Afghanistan into greater chaos, which is exactly what happened,” 29-year-old Massoud told AFP via WhatsApp. “He strongly believed that the Russians were leaving Afghanistan too soon.”

Graeme Smith, from the International Crisis Group, said the mujahideen understood that without a solid plan once the enemy leaves “the inferno of violence that follows might be much worse”. “They remember the brutal civil war of the early 1990s, and they don’t want to repeat that,” he told AFP.

Sitting atop a Russian tank abandoned on the roadside, Mirza bitterly recalled the violent legacy that trailed the vanquished Soviets. “The day they left was both a sad and happy day for us,” the softly-spoken former mujahideen said. “Now that the US has decided to leave, we fear the same thing could happen again.”

Previous articlePSL 4: “Heart of Karachiites beats for Karachi Kings”
Next articleIn Syria, families flee IS holdout to dust and desperation

US threatens countries who vote against it on Jerusalem decision