A social media user posted the video of Shah Rukh Khan and Shahid Kapoor mocking Sushant Singh Rajput while calling him up on stage in one of the award ceremonies. Even Salman Khan came under attack for supporting the conspirators against Sushant Singh Rajput. 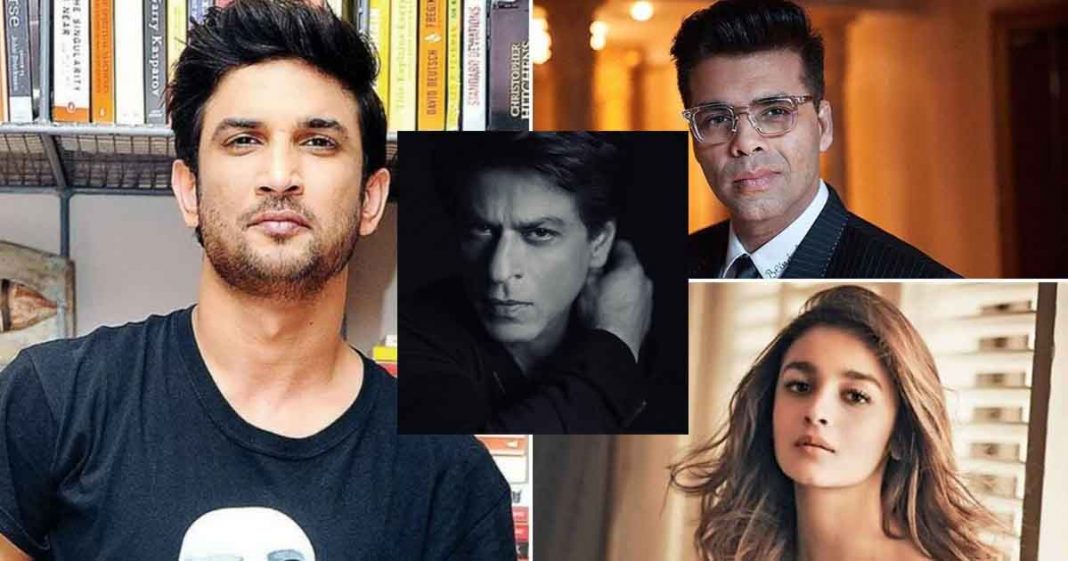 Videos of these actors bullying the actor on various occasions resurfaced on social media. The advocates of Sushant Singh Rajput accused nepotism and unwarranted scorn of the bigwigs of the Bollywood actor that forced him to commit suicide.

Soon after his death,” Alia turned to her social media to express her sorrow saying: “I’m in a deep state of shock. No matter how much I think about it, I don’t have the words. I’m devastated. You’ve left us too soon. You will be missed by each and every one of us. My deepest condolences to the Sushant’s family and loved ones, and his fans (sic).”

I’m in a deep state of shock.
No matter how much I think about it, I don’t have the words.
I’m totally devastated.
You've left us too soon.
You will be missed by each and every one of us.
My deepest condolences to Sushant's family, loved ones, and his fans. 🙏

Also, Karan Johar too expressed his regret over the incident. He mourned the suicide of Sushant Singh Rajput in a tweet. “This is heartbreaking. I have such strong memories of the times we have shared. I can’t believe this…Rest in peace my friend when the shock subsides only the best memories will remain. Broken heart (sic).”

Alia is this actress who was obese in the past and is now cocky
She was saying to kill Sushant
Sushant, this poor suicide guy
Whoever does not find anyone to help and does not feel that he is from the technical family
I accuse Alia Bhatt of killing Sushant Singh Raj#aliaabhatt pic.twitter.com/JSP5BdEafH

However, the actors soon confronted flak on social media for hypocrisy. The trend #BoycottBollywood also picked up on Twitter under which Indian social media users slammed Bollywood celebrities for not respecting the deceased actor when he was alive.

A screenshot of Sushant Singh Rajput’s comment appeared on social media, in which he appealed to his fans and followers to watch his movies and make them a big success. Since in case of their failure, he would be thrown out of the film industry. He did not have a ‘godfather’ in the entertainment industry hence he needs the support of his fans to survive.

The star pointed to the prevailing nepotism in the Indian film industry, where the star’s children get the opportunity to make their debuts with A-list directors and producers.

Kangana Ranaut also slammed the A-list Bollywood celebrities for making a hostile environment for Sushant Singh Rajput and leading him to the circumstances where he gave up on his life in despair and grief.

All I can share is a #balajitelefilms tribute to you with few of our pictures! This made me think if we really are there for those we love or care for! Do we know people or do we just judge the ones who don’t follow norms! (1/3) pic.twitter.com/jzcvVWrw7O

Salman Khan too came under attack for supporting the conspirators against Sushant Singh Rajput. He is reportedly among top producers that banned Sushant Singh. Others included Dharma Productions, YRF Productions, Balaji Productions, TSeries, and others. This left the actor with no choice but to work in TV serials only.

Sorry! From today i boycott all the
movies of Star Kids because talented people like #shushantsingrajput are loosing their lives and go unnoticed. Star Kids get name fame without great efforts and talented people without Godfather struggle like hell goes unnoticed 😔 pic.twitter.com/c0jf8zIqgo

His Bollywood peers took to Twitter to mourn his death. Sushant Singh Rajput is trending on Twitter since yesterday. But his suicide has put under the spotlight the subject of mental health and depression.

The discussion around mental health and challenges to outstrip depression picked up on social media. His fans discussed how fame, wealth, and success are not the ultimate solutions to happiness and contentment. Behind the glamorous and glitzy world of entertainment, a score of these entertainers suffer from discontentment. Many social media users believe that the demise of Sushant Singh exposed the fact that even celebrities suffer from sadness, anxiety, and depression.

Sushant Singh Rajput was an Indian actor, dancer, entrepreneur, and philanthropist. He began his career through TV dramas.

The peculiar case of the suicide of Sushant Singh Rajput highlighted the ugly truths about the second-largest entertainment industry.