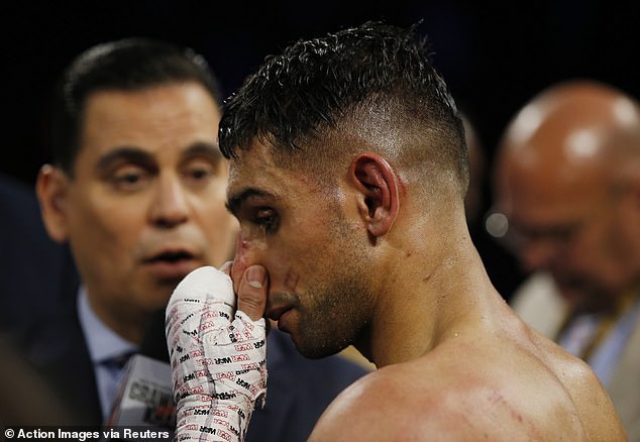 In his interview with BBC Asian Network, Khan admitted that he fears to turn into a ‘woman’ if he does the household chores.

Amir Khan admitted in the I’m a Celebrity jungle that he never really cooks at home because he has his sisters, wife and mum to do it. Our callers share their reactions to this pic.twitter.com/WK2cXiKB5B

He also said that he expects his wife to cook for him once he is home from work.

While talking to another man who cooked for his wife, when she was at work, the boxer said, “I would never cook, in my culture, women, that’s their job to do the cooking. They’re [the] best at cooking.”

Read more: Amir Khan admits he embarrassed himself in public feud with wife

He went on to add, “It’s a man’s job to actually do other jobs like the hard work, the hard labor jobs around the house.”

Khan also added that “I’ve got a dishwasher, washing machine, I’ve never actually known how to use these things. I would never touch that machinery, ever. You would turn into a woman. I’m a man. If I started dishwashing… “

When asked if he would turn into a woman if he used the machine, he responded by saying “Yeah”.

Such controversial statements are not helping Khan as strives to improve his positive image among his follower that was shattered after a public spat with his wife Faryal Makhdoom in the past few months.

Really?! It’s so sad that you have no desire to learn these for yourself.

@amirkingkhan what a bum!!! Gets tired of housework cause he doesn’t get paid to do it!!!

This is not the first time Khan has made bizarre statements that show his regressive nature as recently he amazed everyone when he asked his mates on the reality show ‘I m a Celebrity..Get me out of here’ if there had ever been a female Prime Minister?

Read more: Amir Khan in love with Faryal once again: sale of mansion..

After the shocking reactions of his campmates to his question, he backtracked and recalled Margaret Thatcher, but seemingly did know about Theresa May- the current Prime Minister of Britain.

He then said, “Don’t tell anyone” when he was reminded that the current occupant of 10 Downing Street is a woman.

Previous articleWill the U.S. withdraw its troops from Syria after ISIS is routed?
Next articleLondon Mayor got a Bollywood welcome in Mumbai

16 September 2021
Previous articleWill the U.S. withdraw its troops from Syria after ISIS is routed?
Next articleLondon Mayor got a Bollywood welcome in Mumbai

Sindh Police extends invitation to Martin Kobler for a meet-up