Rampant testing and rapid prevention and control measures have allowed authorities in China to control Beijing's most recent outbreak. However, fears of new clusters continue unabated. 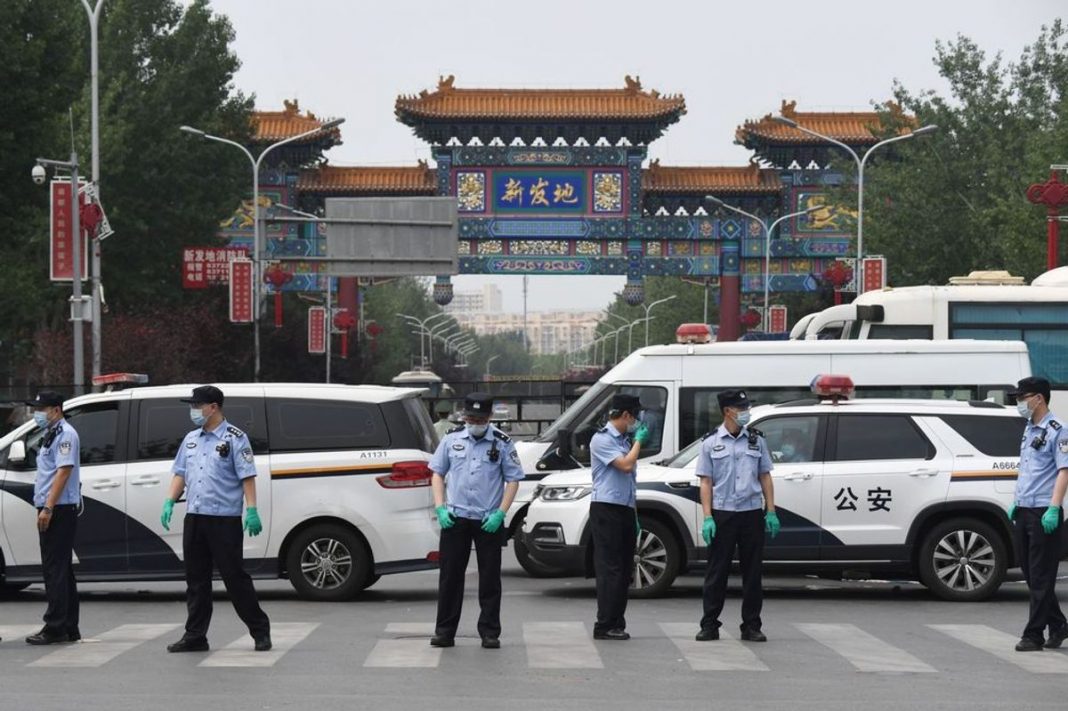 The new coronavirus outbreak that has infected 256 people in Beijing since early June is “under control“, officials in the Chinese capital said Wednesday, but fears still remain over the risk of community transmission.

Authorities have raced to contain the outbreak linked to the largest wholesale food market in Beijing after the first case was announced on June 11, leading to a partial lockdown of the city.

“The Beijing epidemic directly linked to Xinfadi (market) is basically under control, but at the same time we have discovered household and workplace cluster infections and cases of community transmission,” said Beijing municipal government spokesman Xu Hejian at a briefing.

“The prevention and control situation remains complicated, we cannot lower our guard in the slightest.”

Officials found that 253 out of 256 Beijing cases were linked to Xinfadi in the south of the city, while contact tracing for the remaining three was still ongoing.

The city announced seven new cases on Wednesday, with the rate of infection slowing since the start of this week.

“This sends a very positive signal, and proves that the prevention and control measures taken lately, as well as lockdown of residential compounds, are effective,” said Lei Haichao, head of the Beijing health commission.

#Beijing's cluster infections linked to Xinfadi wholesale market are under control, said Zhang Boli, academician of the Chinese Academy of Engineering, adding that over 90% of the #coronavirus cases are patients with mild symptoms due to early detection and treatment. pic.twitter.com/gKnZmM6OYv

“The combination of fever clinics, discovering (cases) from close contacts, and mass nucleic acid testing have played an important role in early detection.”

The city increased its daily nucleic acid sample testing capacity to 300,000 from 100,000 per day in early June, said Lei, adding that 137 cases — just over half — were found through screening.

Many cases have been low-income migrant workers at Xinfadi and nearby restaurants. The market and dozens of residential compounds have been under lockdown since June 13.

Beijing has mass-tested wholesale market workers, restaurant workers, residents of medium and high-risk neighbourhoods and delivery couriers over the past week.

Experts warned that smaller, recurrent outbreaks were likely in future.

“There may be an increase in cases in the winter or next spring, but I don’t think the outbreak will be as big as the first wave of the pandemic,” said Zhong Nanshan, a leading respiratory expert who spearheaded China’s response to the SARS pandemic, on Wednesday.

What was the extent of the Beijing outbreak?

Earlier, parts of Beijing were placed under lockdown on Saturday as six new domestic coronavirus cases were reported, fuelling fears of a Second wave of the virus in China. China was the site of the first coronavirus case in history, a subject which has become the object of many conspiracy theories as people around the world speculate on the origins of the virus. While China initially saw rapid infections, it was able to enforce strict lockdowns, which kept its tally relatively low. It is currently the 18th most affected country by the virus, down from the first spot in January 2020.

People were prevented from leaving their homes at 11 residential estates in south Beijing’s Fengtai district after most of the cases were linked to a nearby meat market, city officials said in a press briefing.

Beijing’s first COVID-19 case in two months, announced on Thursday, had visited Xinfadi meat market last week and had no recent travel history outside the city.

China’s domestic outbreak had been brought largely under control through vast, strict lockdowns that were imposed after the disease was first detected in the central city of Wuhan last year.

These measures had largely been lifted as the infection rate dropped, and the majority of cases reported in recent months were citizens living abroad who were tested as they returned home during the pandemic.

Among the six new domestic cases announced Saturday were three Xinfadi market workers, one market visitor and two employees at the China Meat Research Centre, seven kilometres (four miles) away. One of the employees had visited the market last week.

WHO sends team to China fearing pandemic is far from over

China warns US: ‘dangerous moves’ on Taiwan could escalate tensions

China vs West: A Race to Grab the Power Throne