The author, who personally know Nawaz Sharif and Zulfikar Ali Bhutto from their early days, pens down tales about both from the time they started their political struggle. A comparison between a barrister from England and a "Pehalwan" from Akhara of "Bholu Bros". 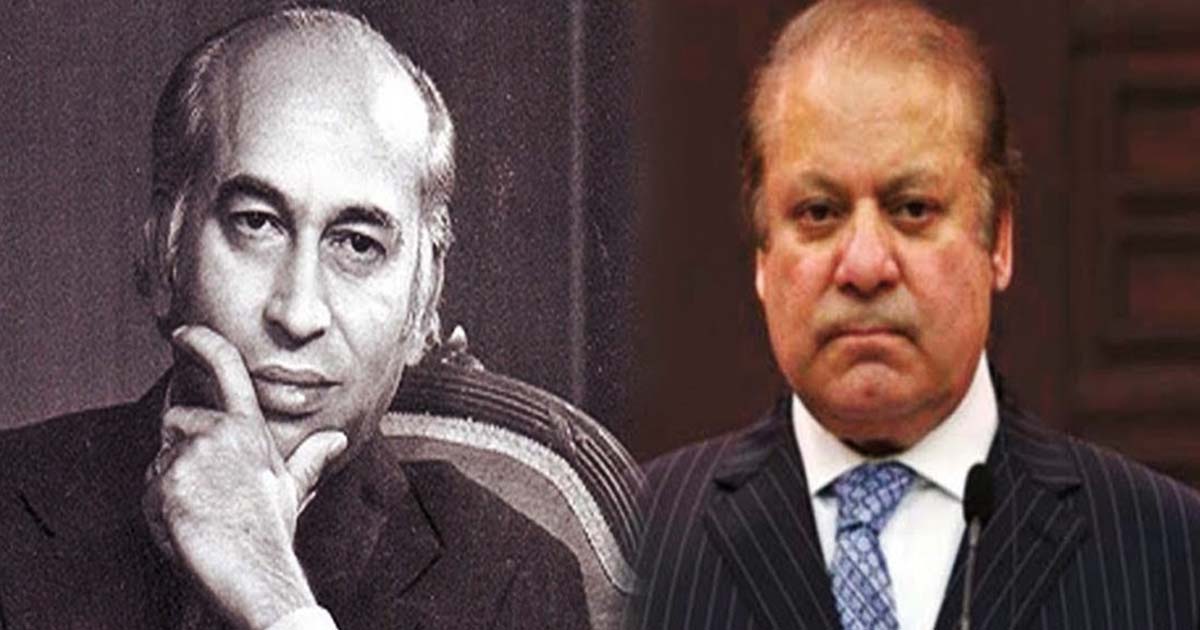 The 1965 war proved to be disastrous for Viceroy-III of Pakistan (Ghulam Muhammad Viceroy-I, Iskander Mirza Viceroy-II). Ayub Khan’s dashing foreign minister Zulfikar Ali Bhutto left the cabinet soon after in 1966. He then started to test the waters of defiance. Finally, in November 1967 he launched his People’s Party at YMCA Hall Lahore.

Incidentally, I was there for my daily sports practice. Dressed in a white double-breasted suit he was beaming with confidence. He asked the crowd ‘Awami or Sarkari’ the unanimous chant was ‘Awami’ which meant that ‘Sarkari Muslim League’ (PML-Convention) was rejected after the creation of Pakistan. PPP was the first ‘Awami Party’, in the formation of which GHQ had no role.

Nawaz was a below average student while Shehbaz was slightly better. Nawaz was then admitted to the Government College on a wrestling seat

Bhutto belonged to a landlord family of Sindh. His father Sir Shahnawaz Bhutto was a respected politician of his times. He studied at the prestigious Cathedral School in Bombay and then proceeded abroad for higher education. Graduated with honors from the University of Berkeley, followed by graduate studies at Oxford University and finally trained as a Barrister at Lincoln’s Inn. He returned to his motherland and started teaching at a law college in Karachi. In 1958 he joined the Iskander Mirza (Viceroy-II of Pakistan) cabinet as Minister of Commerce. There was some nepotism in this appointment as his wife Nusrat Ispahani and the first lady Nahid Mirza both had Iranian origins and were closely related.

Bhutto continued to be an important cabinet member of the Ayub regime (Viceroy-III of Pakistan). In 1963 he was appointed foreign minister, in this capacity he performed exceptionally well. He was the architect of the Sino-Pak relationship. Under his direction, Pakistan started to move out of the USA camp in its national and regional interests.

In comparison, Nawaz Sharif’s father Mian Muhammad Sharif was an ordinary artisan in foundry works. After partition, the family moved from Jati Umra (Amritsar) to Lahore and started a small foundry business behind Lahore Hotel in the Fleming/Dil Muhammad Road area. Mian Sharif was a very ambitious and hardworking individual.

Read more: Zulfi Bhutto: The man and his legend lives on

This group was a beneficiary of the Ayub era’s ill-conceived industrialization and established its first major venture under the name of ‘Ittefaq Foundries‘. Compared to BECO (Batala Engineering Company) another such venture of the era, which was next door, Ittefaq was primitive. Cow dung was used for mold making to cut costs. It took days to get rid of the smell after making a few molds. Adhocism and quick money was the approach.

During their senior school years, both Nawaz and Shehbaz were admitted to the Saint Anthony’s school in Lahore. Nawaz was a below-average student while Shehbaz was slightly better. Nawaz was then admitted to the Government College on a wrestling seat. During his stay there his interest was to wrestle in the nearby ‘Akhara’ (Wrestling Arena) of Bholu brothers.

As a junior I always found him in Malik Sahib’s fruit shop in the company of non-serious students like ‘Arshad Pedal’ and the ‘Malik brothers’. The now late ‘Pedal’ was a unique character, he earned this title because he seldom used his mind & was mostly found moving on his feet. Nawaz, on the other hand, had an old scooter and sometimes drove his father’s car to college.

Zardari has succeeded in destroying Bhutto’s movement for social equality yet his legacy has survived. Despite his credentials his defiance resulted in his judicial murder

After completing my education, I proceeded to USA for higher education. Upon my return in 1992, I found Nawaz Sharif as the Prime Minister (PM) of the country. I was told that General Ghulam Jilani Khan had discovered and promoted him. I had the opportunity to meet Jilani Sahib; he was an astute individual and a street-smart soldier. On my inquiry about the discovery of Nawaz Sharif he replied that he had forwarded three names to General Zia (Viceroy-V of Pakistan) who picked up his name.

Based on my memory of Nawaz during Government College days, I asked him if Sharif Sr could write a paragraph in any language or read or understand a page of text or speak extempore on any topic for a few minutes, his answer was ‘No’. But he went on to say that he is a ‘People’s Person’ with special skills of consensus building. (Muk-Muka).

In 1993 Nawaz Sharif decided to be his own man when he defied his mentor Ghulam Ishaq Khan (Viceroy-VI) who then promptly dismissed his government, which was then challenged in the Supreme Court headed by Justice Nasim Hasan Shah. In a great judicial victory, a first of its kind in the country, his government was restored. He now stood face to face with Viceroy-VI. Fearing civil war as the President and PM clashed, General Waheed Kakar intervened and both were sent packing under a compromise deal.

With his large stints in power and a massive financial empire, built mostly through misuse of authority, the house of Sharif was now a force to be reckoned with. His defiance was not based on intellect or service to the people or an ideological base. It was a grand evil alliance that continues to seek personal gains for itself and its supporters.

Nation building is not part of their agenda. After a very treacherous political journey, he is now raising all the right issues but with no credibility or credentials. The Sharif Financial Empire is currently finally under scrutiny. There is no money trail to justify this phenomenal and unprecedented growth after entering politics. General Jilani’s words of ‘Muk-Muka’ ring in my mind.

Bhutto’s defiance had an ideological base combined with solid professional credentials. He was a skilled individual who was trained as a Barrister. People’s power was his approach, he authored six books. Myth of Independence that he penned is a well-regarded and cited publication. There were no cases of financial irregularities against him till today despite political differences he is regarded as a great leader by all standards who served his country and its fledgling democratic order. His party has won five elections, despite the Zardari hijacking they are still in power in Sindh.

Defiance calls for struggle and a clean slate which Sharif does not have. Zardari has succeeded in destroying Bhutto’s movement for social equality yet his legacy has survived. Despite his credentials, his defiance resulted in his judicial murder. Imposed, fabricated and corrupt leadership can ill-afford confrontation with the forces that created them in the first place. Where Bhutto, the trained Barrister failed, Sharif the trained wrestler and hustler cannot succeed, history is not on his side. Pakistan needs an Erdogan to first deliver and then defy the forces of status-quo.

Dr. Farid A. Malik is Ex-Chairman, Pakistan Science Foundation. The article was first published in Pakistan Today and has been republished here with the author’s permission. The views expressed in this article are the author’s own and do not necessarily reflect Global Village Space’s editorial policy.

America’s wars around the globe: Necessary and constitutional?

Is it time to face the reality?