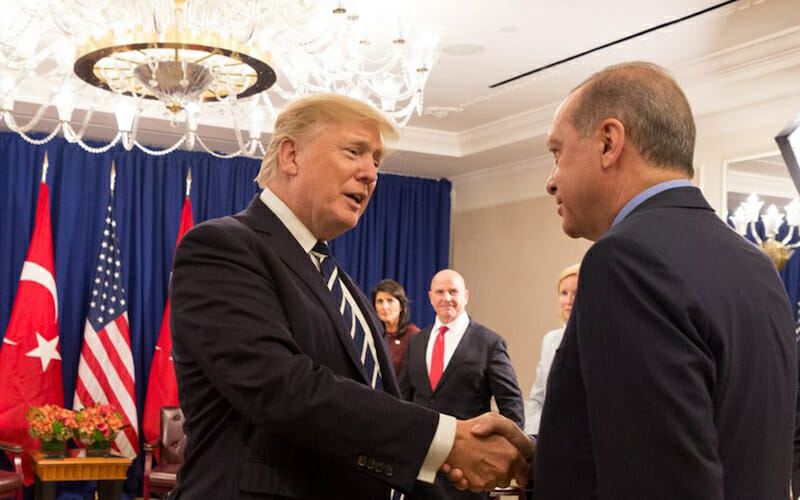 A Trump administration decision to sanction two key Turkish officials in retaliation for the continued detention of an American cleric coupled with unqualified support for Israel and the adoption of a backseat in Syria threatens to further undermine US influence in the Eastern Mediterranean, a key part of the world in which Russia, Iran, China and an increasingly anti-American, Eurasia-focused Turkey are gaining the upper hand.

Crisis in Europe, spurred in part by the Eastern Mediterranean’s export of millions fleeing civil war in Syria, highlights the risks inherent to US abandonment of the region and single-minded focus on support of Israel. The risks are magnified by the fact that the region remains a jihadist heartland and a playground in the Saudi-Iranian struggle for regional hegemony. Potential instability is enhanced by Israel’s determination to deprive Iran of a permanent military presence in Syria and unresolved Palestinian and Kurdish national aspirations.

Vowing to take retaliatory action, president Recep Tayyip Erdogan and the Turkish foreign ministry adopted both a defiant and hurt tone in their response to the US sanctions imposed at a time that Turkish-Russian relations face an uncertain future

“The United States needs a holistic and integrated approach towards the Eastern Mediterranean that will stabilize Europe and shift the regional balance in the Middle East back towards the United States. Resolving the Syrian conflict is essential for Eastern Mediterranean stabilization, and developing an appropriate policy approach toward an increasingly antagonistic and anti-democratic Turkey is the key to solving the Syria puzzle and re-anchoring the region toward the Euro-Atlantic community,” said a report published this week by the Washington-based Center for Strategic and International Studies (CSIS).

If the sanctioning of the Turkish ministers of justice and interior in response to the two-year-long detention of pastor Andrew Brunson on charges of supporting Fethullah Gulen, the Turkish cleric living in Pennsylvania, whom Turkey holds responsible for the failed 2016 military coup, is any indication, the Trump administration is in no mood to engage constructively in a bid to reverse its diminished influence in the Eastern Mediterranean.

The administration, adding insult to injury, announced the sanctions on the same day that the Senate approved a defense bill that prohibits the sale of F-35 jets to Turkey until the Pentagon reports on the state of Turkish-US relations, including the impact of Turkey’s acquisition of Russia’s S-400 anti-missile system.

Spinning the US actions as part of a conspiracy to undermine Turkey’s economy at a time that the Turkish lira has dropped dramatically against the dollar, pro-government media pronounced Turkey’s alliance with the United States dead and called for an end to US access to the Incirlik air base in the southeast of the country.

Vowing to take retaliatory action, president Recep Tayyip Erdogan and the Turkish foreign ministry adopted both a defiant and hurt tone in their response to the US sanctions imposed at a time that Turkish-Russian relations face an uncertain future. In the short term, the sanctions and increasingly strained relationship with the United States make Turkey more dependent on Russia.

They also constitute an obstacle to the United States’ ability to exploit potential opportunities to shift the balance of power in the region in its favor. Russian-Turkish interests are likely to diverge once Syria moves to regain control, of Idlib, the dumping ground for rebels and jihadists, including those that hail from the Caucasus and Central Asia, evacuated from areas elsewhere retaken by Syrian military forces.

Russia has been seeking to stave off a Syrian military offensive that would create yet another humanitarian crisis by attempting to negotiate a solution with Turkey and rebel groups. Idlib is but one potential flashpoint in Turkish-Russian relations. Both Russia and Syria see the Syrian Kurdish People’s Protection Units (YPG), a militia viewed by Turkey as a terrorist extension of the outlawed Kurdistan Workers’ Party (PKK), as important to resolving Idlib. YPG representatives have been traveling to Moscow, where the group was allowed to open an office in 2016.

Idlib is but one potential flashpoint in Turkish-Russian relations. Both Russia and Syria see the Syrian Kurdish People’s Protection Units (YPG), a militia viewed by Turkey as a terrorist extension of the outlawed Kurdistan Workers’ Party (PKK), as important to resolving Idlib.

“The Kurds will take part in the Syrian Constitutional Committee anyway. Their representatives will be included in every faction: opposition groups, the government’s delegation, and civil society. We ask everyone to abstain from dividing the Kurds into pro-Turkish, pro-Russian or PYD and YPG categories, the latter of which is viewed negatively in Ankara,” Mr. Lavrentiev said referring to the political wing of the YPG, the Democratic Union Party, by its initials PYD.

A Russian-backed resolution of a three-decade-old dispute over the rights of Caspian Sea littoral states Russia, Iran, Azerbaijan, Kazakhstan, and Turkmenistan set to be signed on August 12 paves the way for construction of an oil pipeline to Europe that could undermine Turkish hopes of becoming an alternative energy corridor that bypasses Russia.

Moreover, Russia this month began delivering arms to Armenia, whose borders with Turkey and Iran are guarded by Russian troops against the backdrop of reports that Turkey was planning to establish a military base in Nakhichevan, a landlocked autonomous region that is separated from Azerbaijan by a strip of Armenian territory. Russian officials fear that Turkish and Azerbaijani military moves in Nakhichevan could fuel Armenian-Azerbaijani tensions over the Armenian enclave of Nagorno-Karabakh.

In its report, CSIS argued that the United States has a strategic interest in reasserting itself in the Eastern Mediterranean as a means of preserving European unity and security; stabilizing the Middle East; countering projection of power by Russia, Iran and China, and confronting challenges by numerous non-state actors. Describing the Eastern Mediterranean as a theatre of big power competition that threatens the US and trans-Atlantic interests, the report maps out a detailed strategy for US re-engagement.

The United States, “must make hard choices and embrace realistic goals, however unattractive, to reinvigorate US diplomatic, economic and security engagement in the region. This will involve addressing and reconciling seemingly incompatible US policies towards Syria and Turkey that can only be bridged through active created and sustained diplomacy backed by ongoing military engagement,” the report said. The US sanctioning of the Turkish ministers suggests that the mood in the Trump administration is a far cry from the kind of approach the report envisions.