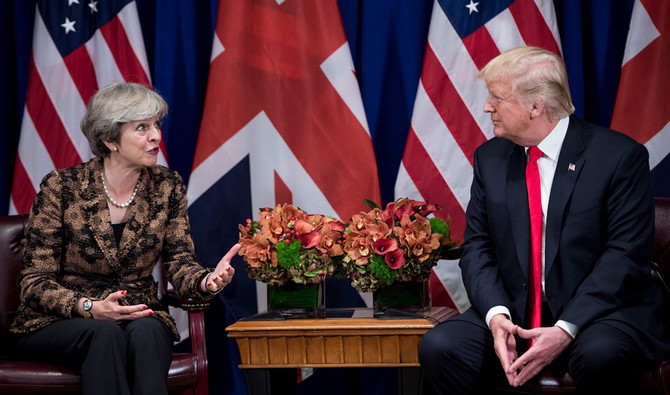 US President Donald Trump will make a long-awaited visit to Britain on July 13, Downing Street announced Thursday, his first since taking power in January last year and likely to draw large protests.

The visit had been repeatedly delayed amid a series of diplomatic spats and fears it could be marred by anti-Trump demonstrations.”The President of the United States will visit the UK on 13 July,” Prime Minister Theresa May’s spokesman said in a statement, adding he would hold bilateral talks with the British leader.

He blamed his no-show on the decision to sell America’s old embassy in Mayfair for “peanuts” while the new $1.2 billion site was in “an off location”.

May controversially offered Trump a state visit — which would involve meeting Queen Elizabeth II at Buckingham Palace — when she was the first foreign leader to visit him shortly after entering the White House.

Read more: To pull out of Syria or to attack Syria: The Trump…

The invitation provoked an uproar in Britain, where the US president’s “America First” agenda, including a proposed ban on immigration from a number of Muslim-majority countries, is unpopular.

British lawmakers called on May to withdraw the offer, while protesters have promised to turn out in record numbers — reiterating the vows Thursday.”Anybody any good at making placards?” British opposition lawmaker David Lammy asked cheekily on Twitter.Amnesty International UK said Trump had overseen “a deeply disturbing human rights roll-back”.

“We and thousands of our supporters will definitely be making our voices heard about this,” it added.Meanwhile, Guardian columnist Owen Jones, a prominent leftwing activist, called for “everybody out on the streets”. “Let’s make Donald Trump’s visit… a carnival against hatred,” he added, sharing a link to a “protest Trump’s visit” Facebook event that 31,000 people had signed up to attend.

The July trip is set to be a working visit, with the US president expected at a NATO summit in Brussels, Belgium, on July 11 and 12.Meanwhile, the offer of a ceremonial state visit remains on the table, according to a Whitehall source.Britain’s Daily Telegraph reported Trump will meet the Queen and go to Chequers, the prime minister’s country retreat, in a bid to avoid protests in London.

Foreign Secretary Boris Johnson reacted enthusiastically — imitating the US commander-in-chief’s distinct Twitter style with the use of some capital letters.”FANTASTIC news that President @realDonaldTrump will, at last, come to Britain on 13 July,” he wrote.  “Looking forward to seeing our closest ally and friend on the GREATest visit ever.”

“The President of the United States will visit the UK on 13 July,” Prime Minister Theresa May’s spokesman said in a statement, adding he would hold bilateral talks with the British leader.

However, May has faced repeated calls to withdraw the state visit offer following diplomatic fallouts with the American leader, who has already visited several other European capitals.

When May condemned Trump for sharing the messages, he tweeted at her “don’t focus on me, focus on the destructive Radical Islamic Terrorism that is taking place within the United Kingdom.”Trump later made a rare apology, saying he had been unaware of the group’s background.

The US leader was expected in the British capital in February for the opening of the new US  embassy on the banks of the River Thames in a former industrial area that is being regenerated.But Trump again caused potential offense when he disparaged the neighborhood and announced that he would not be coming.He blamed his no-show on the decision to sell America’s old embassy in Mayfair for “peanuts” while the new $1.2 billion site was in “an off location”. “Bad deal. Wanted me to cut ribbon-NO!” he tweeted.

London Mayor Sadiq Khan, who clashed with Trump on social media amid last year’s terror attacks on the British capital, said the president “will experience an open and diverse city that has always chosen unity over division and hope over fear”.

N. Korean athletes arrive in the South for Paralympics

Iran responds to US sanctions with a ‘budget of resistance’