“Boot” controls all of you: Faisal Vawda lost control in live program!

PTI's Federal Minister Faisal Vawda lost his calm, in a live TV program, while poking contempt on Pakistan People's Party and Pakistan Muslim League-Nawaz. He was blaming them for their hypocrisy and double standards for always speaking against the armed forces but then quickly supporting the Amended Army Act, 2020. PMLN and PPP had always blamed PTI to be an Establishment stooge and their sudden support for the Amended Army Act has opened them to political ridicule. 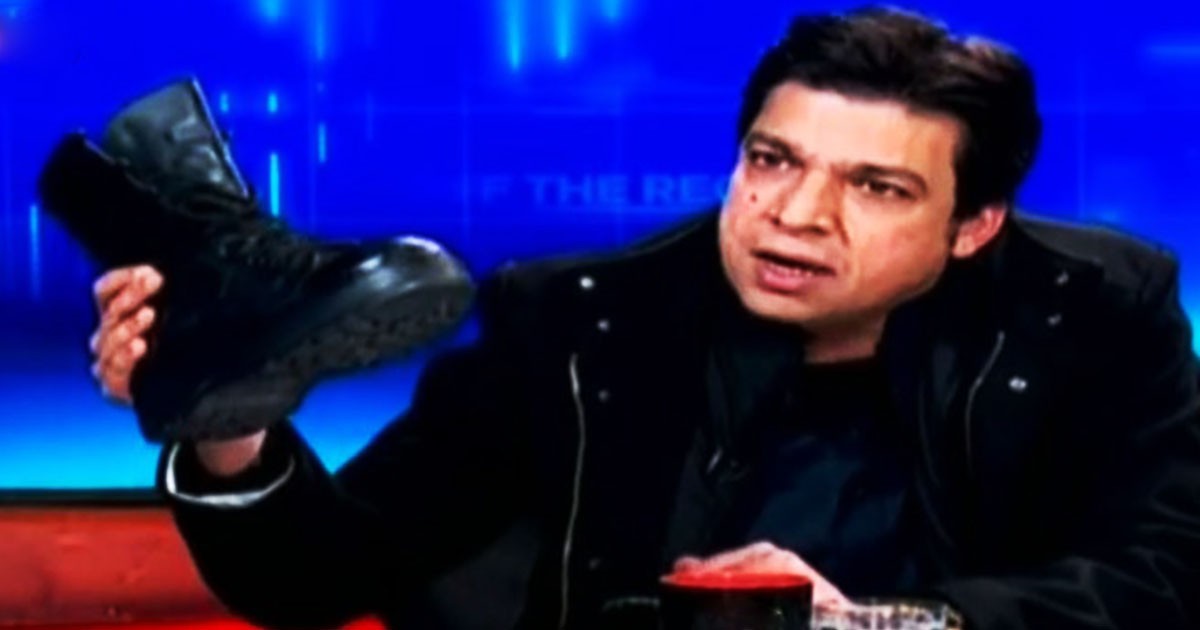 Faisal Vawda was part of the guest panel along with PPP’s Qamar Zaman Kaira and PML-N’s Javed Abbasi, on the show.

Federal Minister, angered the guests when he placed the boot on top of the table. He warned that from now on he will carry boots to talk shows to shame the opposition parties for their unconditional support for Army Act Amendment Bill.

Qamar Zaman Kaira, objected to Faisal Vawda’s disgraceful speech against them on national TV and slammed him for disrespecting the armed forces by showing boot on a national program

Federal Minister sneered at the opposition parties for manipulating their support for armed forces according to personal whims.

Hence, boots will remind the nation of the reality of the ‘democratic PMLN’, who ridicule armed forces, spew hate against them, and do not show respect to martyrs but twist their narrative in favor of armed forces for their agendas in time of need.

Vawda said, “It was our stance. We were doing it for the Pakistani nation and we stood firm on our stance.”

Adding that “You [the PML-N] should have given it respect earlier like we have been doing,” he said, referring to the boot he was holding. Anchorperson Kashif Abbasi interrupted the minister to say that he is carrying a more dangerous thing than a gun.

Mr. Vawda continued, “You are talking against them (armed forces’ personnel) even when they embraced martyrdom. Today, when it comes to their loot and plunder Maryam Nawaz and Nawaz Sharif should hold this [the boot] and tell the people that we will respect the boot and do everything (to save us).”

He said the incident has exposed the leadership of PML-N ahead of the nation who can stoop so low as to “lie down and kiss the boot” when it comes to saving their corruption.

Faisal Vawda continued to sneer opposition parties with incongruous remarks on the show.

“It cannot be shined by human hands. The limit to which they have stooped, it looks like the boot has been shined by their [the PML-N leadership] tongues,” he added. “When it comes to your corruption or your accountability, you are ready to lie down and kiss the boot. You will stoop as low as needed.”

Senior opposition leader, Qamar Zaman Kaira, objected to Faisal Vawda’s disgraceful speech against them on national TV and slammed him for disrespecting the armed forces by showing boot on a national program.

Adding that federal minister is exuding the impression that PPP and PML-N voted in favor of the bill under pressure from the armed forces and not on the request of the PTI.

Hence the minister has himself tainted the impression of armed forces among people, said Kaira.

Mr. Vawda snubbed Qaira and asked that why did they rescind the amendments they had proposed for the service’s chief legislation. However, both Qamar Zaman Kaira and Javed Abbasi walked off from the show in protest.

Nawaz Sharif: In a short time from “mujhey kyun nikala” to “I know why I am being...