The government has announced the budget for the next one year despite the end of their tenure before its implementation. The term of the PMLN Government will expire on May 31, 2018, and an Interim Government should be in office on June 1, 2018.

The Prime Minister and Finance Minister, both, when advised to refrain from announcing the budget retorted by saying that they cannot leave the country without a budget. This statement betrays an acute unfamiliarity with the provisions of the Constitution. Article 86 of the Constitution provides as follows:

“Notwithstanding anything contained in the foregoing provisions relating to financial matters, at any time when the National Assembly stands dissolved, the Federal Government may authorize expenditure from the Federal Consolidated Fund in respect of the estimated expenditure for a period not exceeding four months in any financial year, pending completion of the procedure prescribed in Article 82 for the voting of grants and the authentication of the schedule of authorized expenditure in accordance with the provisions of Article 83 in relation to the expenditure.”

The framers of the Constitution had the foresight to envisage the possibility of elections falling at a time when an approved budget may not be in place. Therefore, they endowed the (interim) federal government (and the provincial governments) to make expenditures for 120 days, a limit within which the new National Assembly would be in place and subsequently get these regularized through the budget approval process.

In light of this, the recent announcement of next term’s budget stands a very high possibility that it could face a legal challenge. It is clear that the primary motive for the Government was to give a budget that would be highly populist and politically beneficial for the PMLN in the next elections.

It is clear that the primary motive for the Government was to give a budget that would be highly populist and politically beneficial for the PMLN in the next elections.

The incentives announced would earn sympathy for the incumbent government, while any reversal by a future government would invite public ire. From the statement of the ‘amnesty scheme’ in early April till the announcement of the budget, we have seen a clear pattern that testifies to such an ostensible process of thinking.

This distorted incentive is writ large on the budgetary proposals ‘It is quite enigmatic’ says an exasperated headline in the Business Recorder; ‘In a farewell budget, government showers businesses with incentives’, declared the headline in the Dawn; ‘Expenditures up, Development down’, thundered another headline in the News and, “A candy-coated budget by Miftah” chuckled the Express Tribune.

These headlines betray one’s feelings when attempting to discern the contents of the new budget. Leaving these considerations aside, let us look at the contents of the budget and reflect on its ability to deal with the myriad challenges the economy is facing. In order to comprehend these challenges, we need to understand the puzzle that is currently characterizing our economy.

On one hand, we have a booming economy: current year’s growth of 5.8% was the highest in thirteen years; solid price stability: average inflation during Jul-Mar was 3.8%; an exceptional increase in the availability of credit to the private sector: last fiscal year, it was the highest ever in the country’s history, at Rs.748 billion, and this fiscal year until April 20, it reached Rs.458 billion, higher than last year until this date, we have rising investments at 16.4% of GDP, and strong, robust consumer spending.

But, on the other hand, there are acute challenges of life and death that the economy is facing. Unprecedented vulnerabilities are staring us in the face, where the current account deficit is all set to cross 5% of GDP and there is no chance for it to slow down. The SBP reserves have depleted rapidly since October 2016 (declining from $20.0 billion to $10.5 billion at present – not covering 3-month imports).

More significantly, during this period the country has contracted additional debt of more than $13 billion with net external debt standing at $70 billion. Two doses of depreciation, totaling 10%, have not stemmed the declining reserves. The reserves are bleeding at a rate of nearly $700-800 million per month and are expected to continue the same way. 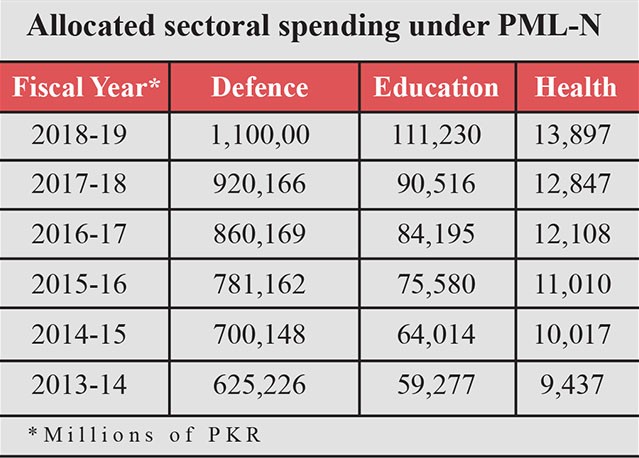 This external account imbalance is a mirror image of the fiscal balance, which is facing a sustained and rising deficit since the last fiscal year. Accordingly, any budget that aims to contribute to stabilizing the economy should address the most immediate problem of a runaway deficit threatening the economy.

In fact, unlike the past, present economic managers have spared themselves from emphasizing on deficit containment as a goal of fiscal policy. Against an ostensible budget target of 4.9% of GDP, the highest of the last four budgets, a number of their estimates are questionable.

First, the fiscal deficit had surged to nearly 6% of GDP in 2016-17 from about 4.3% in 2015-16, reflecting a major reversal of fiscal discipline achieved under the IMF program. For the current fiscal year, the Government had targeted to achieve a deficit of 4.1%, but has now revised it to 5.5%.

Going by what happened last year, even reaching 6% after June would be miraculous. Second, the deficit proposed in the budget at 4.9% itself smacks off an effort to avoid the digit of 5 (remember the famous trick of Bata pricing of Rs.4.95). That aside, is this is a realistic deficit target? Our answer is in the negative.

Third, there are a number of unrealistic budget estimates of whose viability we should question. These include:

(a) provision of Rs.286 billion shown as a surplus from the provinces, last year it was negative Rs.164 billion (0.7% of GDP) – an untenable provision;

(b) revenue provision of Rs.300 billion on account of the petroleum levy (an increase of Rs.130 billion over the revised estimates for the current year). This is dependent on amending the law and the subsequent decision to increase the existing rate – which is politically infeasible. Yet, the increased revenue has been incorporated in the budget;

(c) a provision for gas tax of Rs.100 billion, when the revised target for the current year is Rs.15 billion, is unrealistic, as nothing would be collected since the entire tax has been mired in legal challenges;

(d) there is also a shortfall in revenues of Rs.100 billion on account of giving concessions of nearly Rs.190 billion whereas new tax measures would yield only Rs.90 billion; and,

(e) an admitted expenditure not built in the budget is the impact of increase in pay and pension of Rs.70 billion (which the minister reportedly dismissed as insignificant).

Not aiming to reduce the fiscal deficit is a clear signal that the budget was not concerned with the challenges facing the economy. It was used essentially for political purposes. The underlying deficit, as we estimated above, is due to populist measures announced in the budget.

Provision of legal cover to the ‘amnesty scheme’ and tax relief for individual taxpayers, announced prior to the budget, could also be a reason why the decision to present the sixth budget was taken – against the parliamentary limit of five.

Thus, the budget has not even recognized the main challenge of restoring fiscal discipline. In para-8(p), the speech of the minister simply notes the loss of reserves and only mentions that government is taking steps to shore them up.

This is a curious statement. Declaration of such an intent, with only a few weeks left in the Government tenure, does not inspire confidence. Besides, the process of building reserves is painful and requires belt-tightening.

Indeed, it was not a responsible move by the Government, in its desire to secure some political mileage, to lay an embarrassing snare for the next Government.

Any deficit target above 4% is not sustainable for Pakistan, let alone 6.4%. The manner in which we have slipped this target is ominous, and, whether we like it or not, there is no escape from seeking support from the fund. It is amazing to note that the Finance Minister, in his post-budget press conference, has assured the nation that there would not be any need to go to the fund.

However, he did not mention any measures necessary to avert this possibility. More importantly, there is also a chance that the minister may not be present to fulfill his assurance or answer the people.

We conclude by noting that the budget is not a harbinger of economic stability. Indeed, it was not a responsible move by the Government, in its desire to secure some political mileage, to lay an embarrassing snare for the next Government.

Nothing reflects the extravagance of the budget more than the announcement of the reduction in the individual income tax rate from 35% to 15% and raising the limit of taxable income from Rs. 400,000 to Rs.1,200,000 (three-fold increase). This measure alone will have a tax loss of Rs.100-150 billion and exclusion of nearly half the taxpayers (500,000) out of the tax net.

This, and many more of the budget measures would be undone the moment it is examined by a responsible administration which would be tasked to pull the economy back from the precipice it has been pushed in the last two years of mismanagement.

Will Pakistan ever see ‘CHANGE’? – the promise of PTI

IMF is behind PTI’s changes on its new economic team