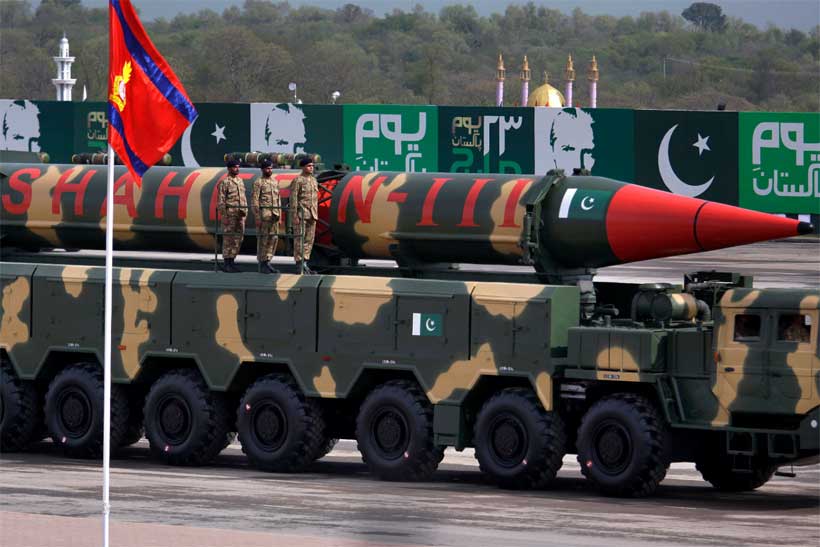 It is a long and well-known story, how Pakistan, despite the West’s and India’s attempts at denying us the nuclear technology, exploded a nuclear device in 1997. Earlier, in May 1974, India had carried out a “peaceful nuclear experiment” and tried to barge into the exclusive nuclear club controlled by the five permanent members of the UN Security Council.

India, since her independence, has been trying to project itself as a regional power. Third world leaders crave for symbols of the geopolitical aristocracy, a nuclear bomb being one of them. In the past, Nehru considered India the successor to the British Raj and hence, right from the beginning, craved for such symbols – an aircraft carrier, a nascent nuclear program with a military dimension, and even a power bloc of his own known as the Nonaligned Movement.

Third world leaders crave for symbols of the geopolitical aristocracy, a nuclear bomb being one of them.

And India’s quest for joining the nuclear club did not have a China –centric origin, it started much before China became a nuclear power. On the other hand, Pakistan’s quest for nuclear capability has rested on its endeavor to frustrate the Indian designs to reduce it to the status of a vassal state – Nuclear weapons address Pakistan’s conventional asymmetry with India and underwrite its security.

With the passage of time, the powers that be have accepted India as a de-facto nuclear power, opening for her the floodgates of International nuclear cooperation. In 2008, the Bush administration recommended lifting the ban on civilian nuclear trade with India. This allowed India to purchase nuclear reactors and Uranium from the Nuclear Suppliers Group (NSG). Ironically, the group itself was founded as a reaction to the 1974 Indian nuclear test, to further limit the export of nuclear equipment, materials, or technology.

With access to the International trade in nuclear materials and technology, India can now divert the fissile material from the civilian nuclear facilities to its nuclear weapons program. While placing all sorts of road blocks against Pakistan, in 2016 India was accorded membership of the Missile Technology Control Regime (MTCR). The membership allows India to buy high-end missile technology, including complete rocket systems and UAVs capable of carrying a 500 kg payload for at least 300 km, as well as systems intended for the delivery of weapons of mass destruction (WMD). Interestingly, China, which blocked India’s entry into the 48- nation NSG, is not a member of the 34-nation MTCR.

In recent times, nuclear disarmament has taken place only where the countries concerned willingly agreed to give up their weapons of mass destruction (WMDs). All along these years, in addition to cultivating a crop of politicians who would willingly surrender Pakistan’s nuclear arsenal, a strong lobby has existed in the West which presses for seizing Pakistan’s nuclear weapons on the pretext that Pakistan is a highly fragile state.

Goldberg & Ambinder (2011), narrate the perceived threat from Pakistan’s nuclear weapons. They mention that during Senate hearings for her confirmation as secretary of state in 2005, Condoleeza Rise had remarked:  “We have noted this problem, and we are prepared to try to deal with it”. They describe Pentagon’s plans for dealing with various contingencies involving Pakistani nuclear crisis as follows:-

Pakistan Army is the “Keeper of the Holy Grail” – Pakistan’s nuclear assets. Taking note of the American plans, it has taken necessary actions to squarely meet the threat. It is perhaps for this reason Pakistan employs a disproportionately large force (a complete Army corps) to guard its nuclear assets. This implies that the US forces will be embroiled with Pakistani forces in a widely dispersed ground operation to get hold of Pakistan’s nuclear weapons, something the Americans are currently loathe to do.

A Radiation bomb is the bigger threat

There is a likely scenario where a terrorist group, like Al Qaeda or Daesh, launches a radiation bomb attack anywhere in the Middle East, South Asia, Europe, or even in the United States.  A radiation bomb, also known as ‘dirty bomb’, is not a nuclear bomb. It is a radiological dispersion device (RDD): an easy to build conventional explosive packed with radioactive material. When such a bomb is exploded, it disperses radioactive material.

A high dose of high energy radiation, such as X-rays emitted by radioactive dust, can induce cancer. Contamination will depend upon the size of the explosive, the amount and type of radioactive material, and weather conditions. Radioactive dust will settle on people, buildings, and roads. Winds and air circulation systems in buildings will spread the radioactive dust even more. Rain will wash the radioactivity into soil, sewer systems, and rivers. Instead of losing their sleep over Pakistan’s nuclear weapons, Americans should be worried more about the radiation bomb threat.

Previous articleAD Khawaja vs. PPP provincial government; the complete saga
Next articleIntolerance in Pakistan: How to tackle the problem?

18 September 2021
Previous articleAD Khawaja vs. PPP provincial government; the complete saga
Next articleIntolerance in Pakistan: How to tackle the problem?

Why University Model UN’s help the youth play a positive role in society?