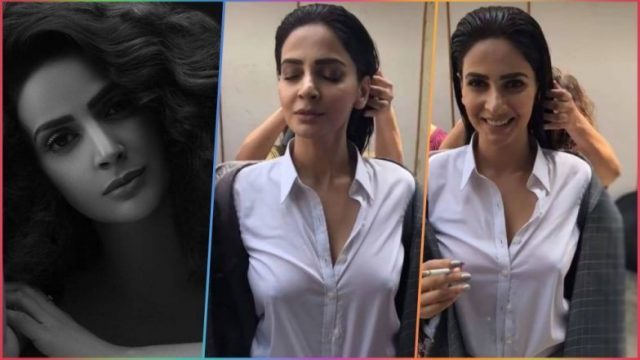 Scores of fellow celebrities rallied in to defend actress Saba Qamar after her controversial pictures were leaked from a fashion photo shoot.

An unknown person filmed the actress to capture Behind-the-Scenes moments. A few of the objectionable clips of the actress while dressing up for the shoot were released on social media. The leaked pictures spread like a wildfire on social media and users could not keep their calm. The actress was bashed for her translucent dressing and for the cigarette in her hand.

Her colleagues and fellow celebrities; Aijaz Aslam and Osman Khalid Butt jumped in to defend the actress. They schooled the social media users for intruding into her privacy as the video was shot without her consent.

Qamar was seen in a somewhat translucent white button-down holding a cigarette.

“Just heard about the all-too-familiar misogynistic, repulsive rhetoric that’s swept the nation once BTS pictures from Saba’s photoshoot were leaked (WITHOUT her consent).”

“First: you do not mess with Saba Qamar. Period. Second: For the love of God, stop looking for every excuse to drag your icons down,” he added. “Third: Stop sharing these images/videos and stop commenting on them. If you want to speak out, speak out against the jahalat of whoever did this just for social media infamy.”

Punjab Nahi Jaungi actor said “I have seen the photos. Those pictures have been taken while she was changing her clothes for the shoot. It looks like she’s shooting in a little transparent shirt, but she’s not. It is wrong to leak her pictures and then criticize them. Who so ever is responsible for this is a cheap person. And as far as the cigarette is concerned, it is bad for health. It is equally bad for every smoker. I would not judge Saba Qamar for holding a cigarette. The main issue is leaking her pictures without her consent”.

Adnan Siddiqui in his tweet said “Came through what’s being called BTS images of my colleague and a friend #SabaQamar’s recently done photo shoot which is spreading on social media like wildfire, I’m deeply saddened by this act, this is not us and we shouldn’t take pride in it in any manner!”

Is Esra Bilgic the new face of Khaadi?

Pakistan, Washington and the folly of cultivating echo chambers.