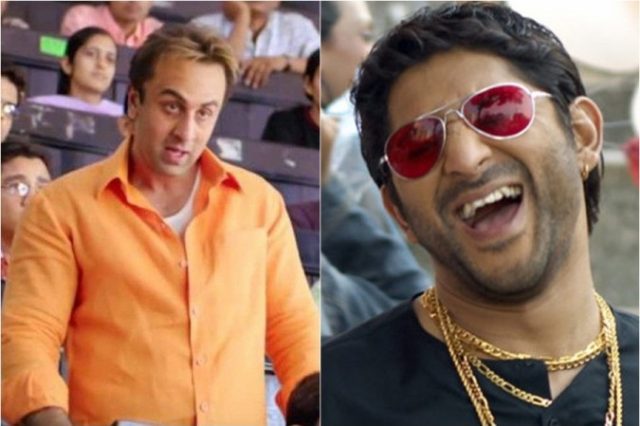 According to the unconfirmed news circulating on social media, Ranbir Kapoor is likely to replace Arshad Warsi as ‘Circuit’ in the third installment of Munna Bhai MBBS.

After the spectacular success of Sanju and Ranbir Kapoor’s phenomenal performance in the movie, the idea is floating in the minds of the makers to introduce Ranbir Kapoor as Arshad Warsi in a comedy series.

A close source informed media, “Seeing Ranbir’s performance in Sanju everyone is impressed. The makers believe Ranbir and Sanjay will share great on-screen chemistry considering their rapport with each other.”

Ranbir Kapoor has recently featured in a biopic movie ‘Sanju’. He played a protagonist Sanjay Dutt in the movie that depicts latter’s personal and professional life struggles.

The film has garnered appreciation from audiences as well as critics. The movie has beat the astounding profit records of Sanjay Leela Bhansali’s ‘Padmaavat’. Sanju has reportedly entered Rs.300 crore club.

Earlier director Rajkumar Hirani revealed his reaction to the Ranbir performing Munna Bhai in the movie. Hirani said “When Ranbir became Munna Bhai for this film, I in my excitement showed it to Sanju and Sanju’s immediate response was: ‘I hope I’m doing Munna Bhai 3’.

Arshad Warsi has played Circuit in the first two installments of Munna Bhai MBBS released in 2003 and 2006 respectively. The movies won several accolades and were box-office hits.

Rajkumar Hirani in an interview revealed that he actually went to Sanjay Dutt to discuss the script and idea of Munna Bhai MBBS 3. But he was awestruck after listening to intriguing tales from the life of Sanjay Dutt. Hence it was Munna Bhai MBBS 3 that paved the way for ‘Sanju’.

The Twitter, however, strongly reacted to the news, People want Arshad Warsi to retain his role as Circuit in Munna Bhai MBBS 3. The news is, however, yet to be confirmed or denied by Rajkumar Hirani.

Previous article‘Teefa in Trouble’ is the first Pakistani movie to release in 25 countries
Next articleProposed to 3rd wife, Sufi scholar Bushra Maneka, without seeing her face: Imran Khan

17 September 2021
Previous article‘Teefa in Trouble’ is the first Pakistani movie to release in 25 countries
Next articleProposed to 3rd wife, Sufi scholar Bushra Maneka, without seeing her face: Imran Khan