China must stop threatening the sovereignty of Asian Neighbors: US Secretary of Defense

US Secretary for Defence engaged with the Chinese Defense Minister during the Shangri-La Dialogue, and warned China against threatening the sovereignty of its Asian neighbors, especially Taiwan. China, in turn, warned US to “stop playing with fire”. 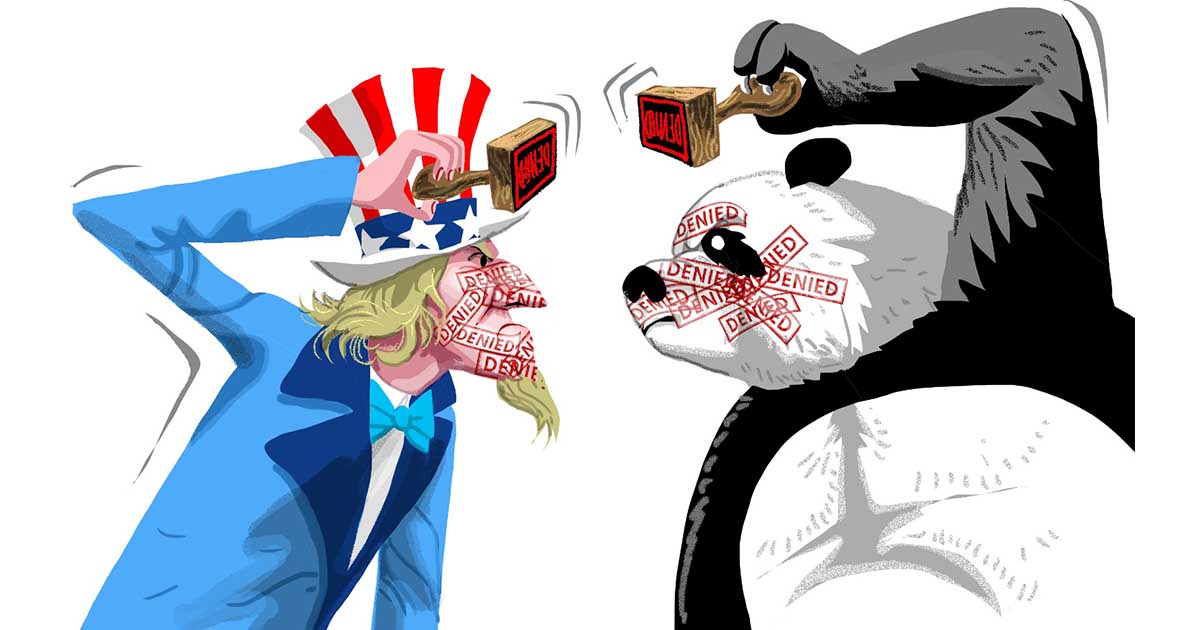 The United States warned China on Saturday against threatening its neighbours’ sovereignty and said Washington was investing in new military technology in the next five years to keep Asia stable. Washington and Beijing have been vying for influence in the region, which hosts potential flashpoints such as the South China Sea, the Korean Peninsula and the Taiwan Strait.

Ties between the two powers are once again taking centre stage at the weekend Singapore conference known as the Shangri-La Dialogue, which gathers defence ministers and top military officials from around the world. While the forum is purely on security, the discussions are also being held against a backdrop of Sino-US trade tensions and high-tech rivalry.

US against China’s Militarization of South China Sea

“China can and should have a cooperative relationship with the rest of the region … But behaviour that erodes other nations’ sovereignty and sows distrust of China’s intentions must end,” acting US Secretary of Defense Patrick Shanahan told the forum.

“Until it does, we stand against a myopic, narrow, and parochial vision of the future, and we stand for the free and open order that has benefitted us all, including China.” Washington has been pushing back against Beijing’s aggressive militarisation of the South China Sea, where China rejects the conflicting territorial claims of Taiwan, Brunei, Malaysia, the Philippines and Vietnam.

Washington and Beijing have been vying for influence in the region, which hosts potential flashpoints such as the South China Sea, the Korean Peninsula and the Taiwan Strait.

Beijing is also regularly angered by US warships transiting through the Taiwan Strait, which it considers part of its territorial waters. Without naming any country, Shanahan referred to nations using a “toolkit of coercion” to destabilise the region, including “deploying advanced weapons systems to militarise disputed areas” and “promoting state-sponsored theft of other nations’ military and civilian technology”.

For the first time since 2011, China has sent its defence minister, General Wei Fenghe, to the Singapore gathering. Wei is scheduled to speak on Sunday during which he is expected to respond to Shanahan’s remarks.

Shanahan said the United States was investing heavily in new military technology to combat fresh threats and maintain its superiority and capability to defend its Asian allies. He said North Korea “remains an extraordinary threat and requires continued vigilance” and stressed Washington would continue to meet its defence obligations to Taiwan, which China sees as part of its territory to be reunified.

“The Indo-Pacific is our priority theatre. We are where we belong. We are investing in the region,” he added. Over the next five years, the Pentagon would invest “signicantly” in programmes needed to ensuring regional stability, he said.

The forum is purely on security, the discussions are also being held against a backdrop of Sino-US trade tensions and high-tech rivalry.

“When we talk about preparedness, we mean having the right capabilities in the right places to respond to crises, and to compete with and deter high-end adversaries,” the Pentagon chief said. While the United States does not seek conflict, it knows that having the capability to win wars is the best deterrence.

“We want to ensure no adversary believes it can successfully achieve political objectives through military force,” he said. He said the Pentagon has requested $104 billion globally — its most ever — for research and development in the next fiscal year and $125 billion in operational readiness.

On Friday, Beijing warned that the US should not underestimate China’s military during a meeting between Shanahan and Wei on the sidelines of the conference. Before his meeting with US Defence Secretary Patrick Shanahan, Chinese Defence Minister Wei Fenghe warned that Washington is “play with fire” by extending support for a self-ruled Taiwan, reported Reuters.

Wu said, “Recently, the U.S. sides has been continually playing the ‘Taiwan card’, trying in futile to ‘use Taiwan to control China’. This is deluded.” The Chinese Defence Minister added, “The series of actions the U.S. side has taken is playing with fire, seriously harms the development of military relations between China and the United States, and seriously harms peace and stability in the Taiwan Strait area.”

The Pentagon chief said. While the United States does not seek conflict, it knows that having the capability to win wars is the best deterrence.

Chinese defence ministry spokesman Wu Qian said both had “reached some consensus” on issues of common concern, adding that Wei “particularly emphasised the Taiwan issue”. China sees Taiwan as part of its territory to be reunified, despite the two sides having been ruled separately since the end of a civil war on the mainland in 1949.

“He (Defence Minister Wei) pointed out that the US has recently had a series of negative words and actions on this issue”, Wu said, adding that Beijing was “firmly opposed” to this. “On the issue of safeguarding national sovereignty and territorial integrity, the US should not underestimate the determination, will and ability of the Chinese military.

Read more: China moves closer to Russia amidst trade war with US

A full rupture between the US and China would have even more severe global consequences than the original Cold War between the West and the Soviet Union, @Nouriel warns https://t.co/Qco5laxZDk