A spokesperson of the Chinese Foreign Ministry welcomed the extension of Gen Qamar Javed Bajwa and stated that under his leadership, Pakistan’s national interests and sovereignty remain secure. He also commended Gen Bajwa’s contributions to the China-Pak relationship. 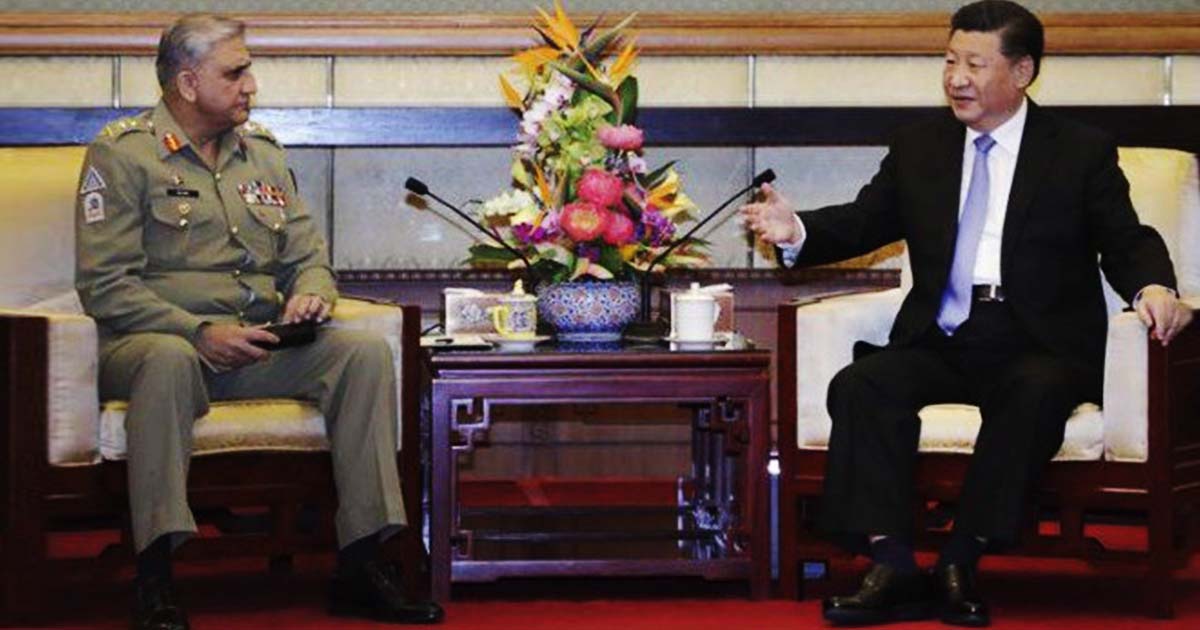 China has welcomed the extension of the Chief of Army Staff Gen Qamar Javed Bajwa. The Chinese Foreign Ministry, on Wednesday, underscored that under the leadership of Gen Bajwa, the Pakistan Army will continue to safeguard Pakistan’s national interests and sovereignty, alongside making contributions to the China-Pakistan relations.

Addressing a regular press briefing at the Chinese Foreign Ministry, spokesperson Geng Shuang welcomed the decision to extend Gen Bajwa’s tenure. Shuang said, “We have noted the decision. General Bajwa is an outstanding leader of the Pakistani army.”

Chinese Foreign Ministry Spokesperson Geng Shuang said that Gen Qamar Javed Bajwa has strong ties with the Chinese government and military, and he has made significant contributions to the relationship between the two neighboring countries.

Shuang said, “As an old friend of the Chinese government and military, he has contributed to the development of China-Pakistan relations.”

The Chinese Foreign Ministry Spokesperson expressed confidence in Gen Bajwa’s leadership and noted that his extension will uphold Pakistan’s national interests, alongside maintaining regional stability. Shuang noted, “Under his leadership, we believe the Pakistani army will make new contributions to uphold Pakistan’s sovereignty and security interests and to advancing peace and stability in the region.”

Commenting on Prime Minister Imran Khan’s decision to extend Gen Qamar Javed Bajwa’s tenure by another three years, Foreign Minister Shah Mehmood Qureshi noted that this decision has been taken in light of the regional situation, the ongoing escalations in Indian-occupied Kashmir, and Pakistan’s role in the Afghan reconciliation process.

The Foreign Minister said, “The security situation of the region, and Pakistan’s role in facilitating the Afghan peace process-all these factors have prompted Prime Minister Imran Khan to exercise his constitutional authority in extending Gen Bajwa’s tenure by another three years.”

Foreign Minister Shah Mehmood Qureshi noted that given the veiled nuclear threats by India’s Defence Minister and the rapidly escalating situation, this decision has sent a clear message that Pakistan’s civil and military leadership is on the same page and fully prepared to tackle any situation.

Speaking to Global Village Space, Jan Achakzai, Chairman of the Center for Geopolitics and Balochistan, commented on the Chinese Foreign Ministry spokesperson’s appreciation for the leadership of Gen Qamar Javed Bajwa.

Achakzai observed, “A rare appreciation from China for the leadership of Gen Bajwa took many watchers by surprise. Beijing’s unprecedented positive comments like, “We believe under his leadership, the Pakistan army will continue to make contributions to upholding Pakistan’s sovereignty, security interests and regional peace and stability,” was an admission of his efforts on several fronts.”

The Baloch analyst noted, “Under his watch, the army raised a battalion and announced plans to form another battalion to protect Chinese citizens and installations under the CPEC project”

Achakzai observed that China has also highlighted its admiration for Beijing’s special relations with Pakistan’s military establishment. He said, “It was Gen Bajwa who for the first time went to Beijing and assured Chinese leadership that like Pakistan’s armed forces, the civilian government of PM Imran Khan will also continue its pragmatic partnership and taking the CPEC to the next level quelling all negative propaganda in some western and Pakistani media attributed to certain government ministers.”

COAS stressed upon the management of POF to adopt a proactive approach for entering into joint ventures with foreign countries as well as private sector and bringing diversification to its product range.

Commenting on Gen Bajwa’s contributions to the China-Pakistan Economic Corridor (CPEC), Achakzai observed, “The new CPEC authority is also manifestation of the highest commitment of Gen Bajwa to assure of the will of Pakistan’s army and sharing partnership with civilian government in removing bottlenecks on the way of CPEC and ensure smooth cooperation with China.”

“Under his leadership, Gen Bajwa developed strong bound with China’s military establishment with a new learning curve in evolution of professionalism in fighting future wars, use of high tech and dynamically networked manpower.”

Achakzai underscored the military relationship between China and Pakistan, Achakzai explained, “Convergence on ways of achieving stability in the regional security setting threatened by India’s posture also points to shared understanding between the two militaries.”

He added, “Gen Bajwa was credited by many including the Chinese leadership, who hardened gains of anti-terror efforts of Pakistan through his vision unfolded in Rad ul-Fasad during his first tenure as the Army Chief.

Read more: China says it will support Pakistan over Kashmir

The Baloch analyst went onto say, “Gen Bajwa shared the Chinese President Xi’s stance that CPEC is a benchmark for international cooperation in the BRI and should serve as a role model for 80 countries who have committed to join the mammoth project.”

“Last but not least, Chinese appreciation for Gen Bajwa partly stemmed for the fact that Pakistan army is the only Institution which is highly respected in the country.”

Achakzai concluded, “Gen Bajwa who regularly visited Beijing and reaffirmed Pakistan Army’s unwavering support for CPEC’s security—a task he has personally taken upon himself and set as one of the strategic objectives of Pakistan Army.”

A press release issued by the ISPR stated that at the POF, Gen Bajwa inaugurated the Urea Formaldehyde Moulding Compound (UFMC) Plant at the Wah Nobel Chemicals Factory. The Chief of Army Staff also visited the POF display center to attend an exhibition of innovative defense equipment. He appreciated the achievements made by the POF Research and Development Department.

The ISPR press release stated, “COAS stressed upon the management of POF to adopt a proactive approach for entering into joint ventures with foreign countries as well as private sector and bringing diversification to its product range. At HIT, COAS was shown defense manufacturing facilities including upgradations of various tanks.”

Read more: China to Support Pakistan’s Decision to Challenge India in the UNSC

The new Urea Formaldehyde Moulding Compound (UFMC) Plant is a new project undertaken by the POF, and it was completed within 8 months. The new plant has been furnished with the leading and most economical silver catalyst technology in order to reduce the costs of production.

China could weaponize “Rare earths” in tech war with US

Chinese and Indian troops face off in Bhutan border dispute