The author discusses the implication of "unlawful & unconstitutional" extension to COAS tenure by the government and the Supreme Court of Pakistan and its legal roots. 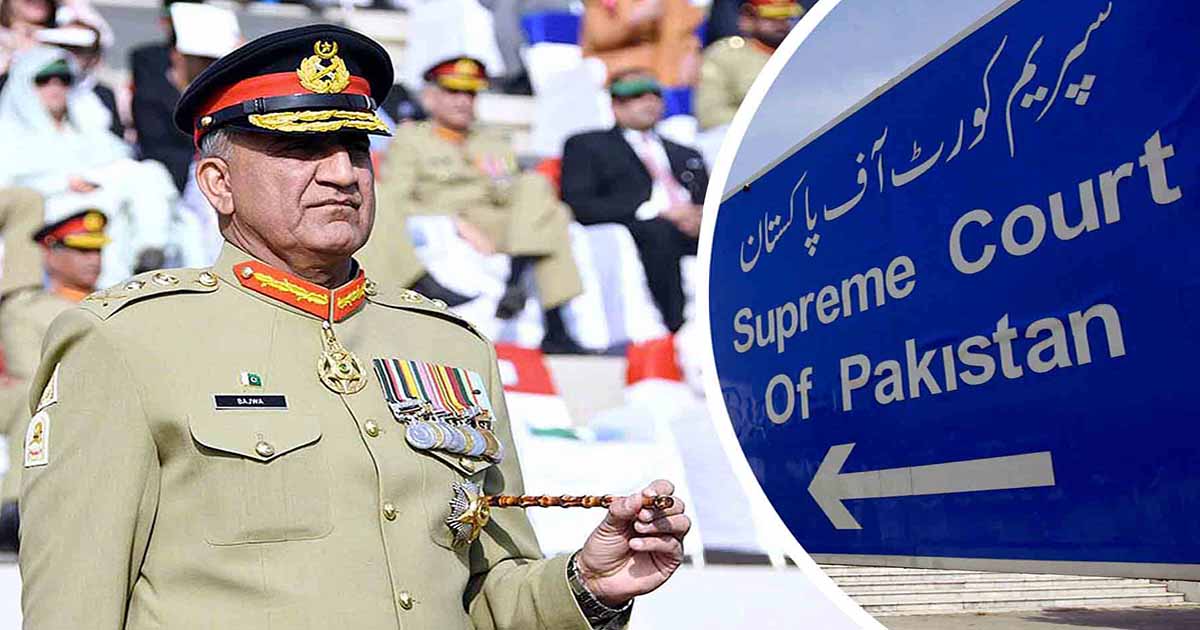 To the sheer disbelief of many, Pakistan was a casualty of an unconstitutional practice that, over the years, solidified into a convention followed reflexively: to extend the service tenure of a serving Chief of Army Staff (COAS).

Fortuitously, a few days ago, in the Supreme Court (SC) of Pakistan, it transpired that the high offices, both the authority to grant an extension and the authority to receive an extension in his tenure of service, were oblivious to the requisite of law. When books of law are shelved for being too hallowed to read, illegal actions fill the gap.

An extension in the tenure of service was unconstitutional, to say the least. By implication, the Pakistan Army was commanded occasionally by the persons who were chairing the institution illegally, whether the illegality was self-sought or granted with due pleasure. If the SC had not taken cognizance of the matter, Pakistan would have another illegal extension-based COAS.

On November 26, the SC took up the case with the professed intention of taking a triumvirate action: looking into the law, ascertaining the validity of the procedure of granting an extension, and understanding the grounds for according extension in the tenure of service. Under the operative maxim, “let justice be done though the heavens fall,” the hearing began with the avowal that the law was disrespectful to any inequality and that no person of any authority could take precedence over an institution.

That is, the welfare of an institution was supreme to the interest of a person. Unfortunately, the resolve fizzled out soon denigrating the fact that no person could be indispensable. Consequently, on November 28, the last day in the service of the COAS Qamar Javed Bajwa, the SC permitted him to continue with his service for another six months. In the meantime, the parliament would make the necessary legislation to legalize the extension.

This was the first instance when the SC granted an extension to the COAS in the tenure of his service. With that, the SC forgot its threesome pledge, which it had made right at the outset and which had grabbed the attention of every Pakistani making him glued to the TV screen. Quietism was disturbed. The high profile case suffered an anticlimax when the SC did not bother afterward to comprehend the grounds for an according extension. The ruckus of the first day of the hearing ended in a genial atmosphere of the third day. The SC submitted to the authority of its redoubtable counterpart.

Article 243 makes all services chiefs equal before the law. It is not possible that the chief of one service be permitted to have an extended period of service tenure or enjoy the facility of reappointment, leaving out the chiefs of other services unbenefited

Nevertheless, the next person in the queue became the victim of injustice meted out by the SC. By implication, the SC declared a junior dispensable at the cost of a senior. The beneficiary also did not consider that the legitimate right of someone else to command the army was being infringed: the recipient should have preferred quittance from the obligation in order to let the next in queue serve the nation.

The retirement of General Bajwa and the handing over of the charge to his whosoever successor was the matter internal to the army, but the SC intervened to halt this routine ceremony, and hence obliterated the option of equal opportunities for all those who qualify for the position. Under the rubric of judicial restraint, the SC created an artificial construct of law to smoothen the transit of General Bajwa, as if the court had been convinced of the grounds of extension – though the grounds remained both unpresented and unheard. This was how the neo-doctrine of necessity began.

Though the SC threw an interim arrangement, the incumbent government is relishing in the sanguinity, rather tapleyism, that it can extend the tenure of the COAS beyond the interim six months by securing a vote of a simple majority in the parliament to amend the given Army Rules and Regulations. If this were so simple! There are three challenges to surmount.

First, the Army Rules and Regulations are protected under the Constitution, Article 243 of which empowers the President to appoint a serving general to the highest seat of the army, the COAS, on the advice of the Prime Minister. Afterward, the same rules and regulations empower the COAS to run the institution of the army. It means that any changes in the rules and regulations to head the army have to be reflected in or sprout from Article 243.

Second, Article 243 makes all services chiefs equal before the law. It is not possible that the chief of one service be permitted to have an extended period of service tenure or enjoy the facility of reappointment, leaving out the chiefs of other services unbenefited. By implication, if the Army Rules and Regulations are tempered with the facility of extension or reappointment, similar rules and regulations governing other services (Navy and Air Force) cannot be left unattended. The law of the land has to deal with all services justly with prejudice to none.

Third, any matter related to appointment, whether dealt with remotely (for instance, through extension or reappointment), cannot escape the ambit of Article 243. Currently, the President is not only the appointing authority, but he is also authorized to determine the appointee’s salary and allowance.

In case of extension and reappointment, it has to be decided who would be the authority to extend the tenure of service and who would reappoint an officer to the post of the COAS with what salary and allowance. Either Article 243 has to be amended or a new article has to be incorporated into the Constitution to rest the matter permanently.

In short, in an attempt to forfend a crisis, the SC instigated another crisis, which not only infused uncertainty into the high office of the army but it also nudged the incumbent government to test its wits.

The author is a freelance writer and can be contacted at: anwarali_60@yahoo.com. The views expressed in this article are the author’s own and do not necessarily reflect Global Village Space’s editorial policy.

Does the constitution allow the judiciary to review amendments?

Pakistan to Temporarily Defer Death Penalities during the Month of Ramazan