Should SC have intervened in General Bajwa’s extension matter? 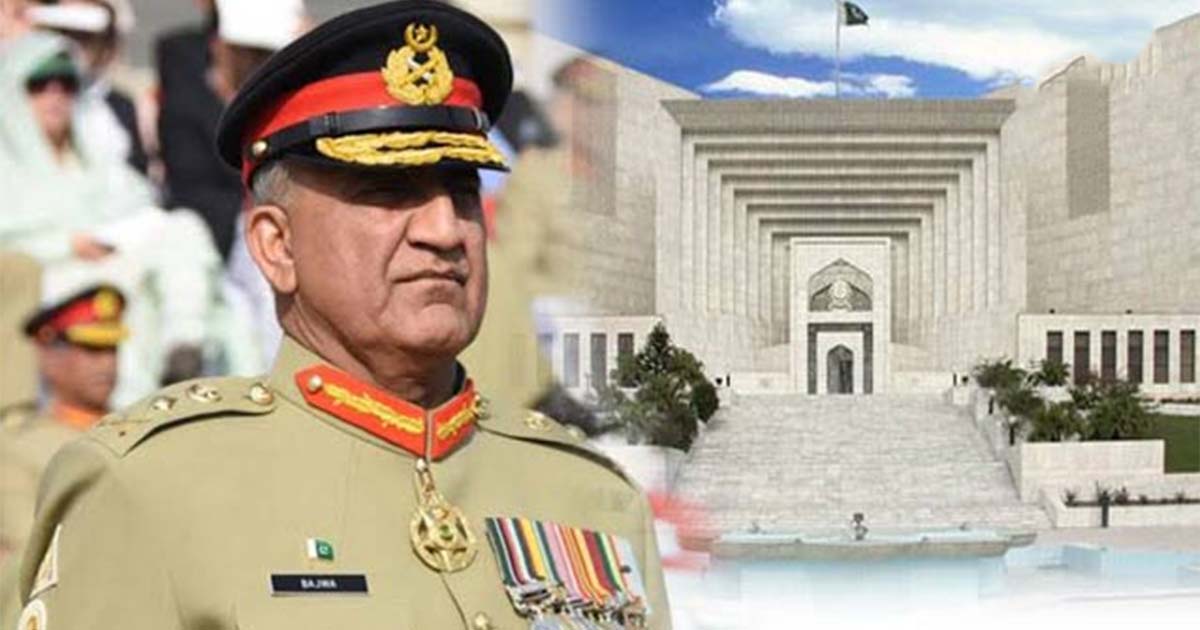 As the matter of the Army Chief’s extension in service is before the Supreme Court of Pakistan, the government is facing relentless criticism for being incompetent and non-serious in such sensitive matters. However, there are some experts and commentators who believe that the court should have not come into this matter which solely belongs to the President, the Prime Minister and his cabinet.

The experts point out the principles which have been indirectly challenged because of the court’s intervention into a highly sensitive matter under an equally sensitive regional security context. It may be mentioned here that since the beginning of 2019, India and Pakistan are not at normal terms. India’s fighter jets violated Pakistani air space, Pakistan responded calculatedly, captured and released its piolet, Abhinandan Varthaman.

Moreover, India also revoked the special status of Indian-occupied Kashmir and turned the valley into an open prison since then. There were also some dangerous statements by the Indian army chief threatening Pakistan of entering into Azad Jammu and Kashmir. Therefore, the fact that there is a hostile regional security environment cannot be overruled.

Dr. Moeed Pirzada, a prominent political commentator, believes that there may have been some procedural mistakes at the part of the government, but the principle that the government has to take the decision should have been respected.

PM has full prerogative to appoint Army Chief, this principle can not be questioned as it will lead to serious unintended consequences, Govt can rectify any procedural lapses and rules & hopefully this matter will be concluded soon https://t.co/nibV8fUfKP via @YouTube

He also tweeted that the court’s insistence that the petition has not been turned into a Suo Moto is confusing. It is important to note Chief Justice Asif Saeed Khosa has said that the media has misunderstood the case “we are dealing with the petition there was no suo moto”.

Yesterday, Supreme Court Order Sheet clearly mentioned that this case against "Army Chief Extension" is now a "Suo Moto" under Art. 184(3) of Constitution. Today we hear that media got it wrong, its not "Suo Moto" but a petition. Something is very strange here & very confusing!

Dr. Pirzada attached an image of the order and pointed out as to what that the court had said.

For all those who have been mislead to believe that media has misreported "Suo Moto" aspect of this case, I attach copies of Order Sheet of Supreme Court, of 26th Nov, 2019 pic.twitter.com/0vbAuJsK12

Prominent political commentator Irshad Bhatti argues that the extension was important for Pakistan’s internal as well as external affairs. He explained the case for the extension in service of the COAS, saying “General Bajwa is a graceful soldier”.

He also said that the CJP’s clarification that this was not a suo moto is very strange.

Moreover, Pakistan People’s Party (PPP) leader and former Supreme Court Bar Association president Aitzaz Ahsan also said that it is the constitutional right of any prime minister to appoint the army chief of his choice. “This is a principle of parliamentary sovereignty,” argued Ahsan, adding: “The court should not have intervened in the matter.”

BREAKING: Renowned lawyer Chaudry Aitzaz Ahsan declares Army Chief's extension as per law. The rights of selection of Army Chief rest with PM and court cannot intervene in it, he said.

The PPP stalwart observed that under Article 48 of the Constitution, the court should not be commenting on how many people voted or did not vote in a cabinet meeting. “Regardless of whether Prime Minister Imran Khan made the right decision or the wrong one, It is not the prerogative of a judge or anyone else to make this appointment.”, Ahsan declared.

Experts believe that in a parliamentary democracy it is the prerogative of the prime minister and his cabinet to take decision related to the national security and foreign policy. “How can the SC decide anything about the regional or national security of Pakistan? Will the court take reasonability that nothing shall happen?” a lawyer told GVS.

It is believed that the court should have not involved itself in the ‘substantive’ aspect of the case; what qualification is needed to re-appointment the COAS. Analysts opine that the court may have restricted itself to procedural matters. “SC should have set some principles about the tenure and process of re-appointment. It must not have discussed substantive aspects of the case,” the lawyer added.

Go, consult and come up with an answer, SC tells AG

The army chief — whose tenure was slated to end on Nov 29 — was given an extension by Prime Minister Imran Khan in August. “General Qamar Javed Bajwa is appointed Chief of Army Staff for another term of three years from the date of completion of current tenure,” a notification issued from the Prime Minister Office (PMO) said at the time.

On Wednesday the court was informed that the rules have been amended to ensure that the extension in service of the COAS Bajwa is legally justified. However, while referring to the amendment in Section 255 of the Army Rules and Regulations, the chief justice asked: “Under which section of the constitution and law was the rule amended?”

He then pointed out that Article 255 did not concern the army chief. “The section that you amended is not about the army chief at all,” Justice Khosa said. “Article 255 is regarding those officials who have retired or have been expelled from service.”

The court is to resume the hearing of the case today at 9:30 am.

Who is running Abu Bachao Movement? Bilawal takes a jibe at Khan

Amnesty International calls out India on violence in Kashmir