Russia doesn't intend to “contain” China like India and its Quad allies do, but Moscow is nevertheless “passively facilitating” New Delhi's vanguard role in this respect in order to leverage this for the purpose of “restoring equality” in its strategic relations with Beijing which could in turn help revive its stalled “New Detente” with the West as well. 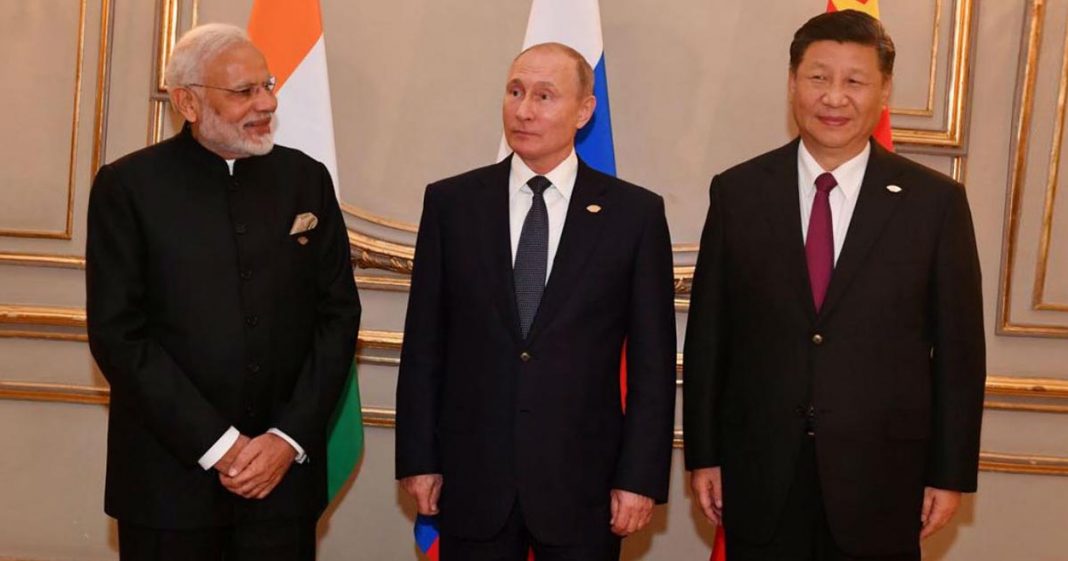 The comments earlier this week by Roman Babushkin, the Deputy Chief of Mission of the Russian Embassy in India, suggest that Russia might have just tacitly “abandoned” its “balancing” act between China and India after visibly tilting closer towards the South Asian state at Beijing’s perceived (key word) expense, though that doesn’t mean that the Eurasian Great Power is interested in “containing” the People’s Republic since all that it’s really doing is “recalibrating” its “balancing” strategy in light of World War C.

The week that changed the world

The 21st-century geopolitics of the emerging Multipolar World Order might have just undergone a fundamental shift earlier this week, though barely anyone even noticed since they were too distracted by much more high-profile news events than to pay attention to the comments a few days ago by Roman Babushkin, the Deputy Chief of Mission of the Russian Embassy in India. According to The Tribune, the diplomat confirmed prior reports that Russia promised India not to sell arms to Pakistan, approved of India’s membership in the Quad with the hope that it becomes “more inclusive” and “based on the principle of undivided security”, and expressed hope that the two countries will soon clinch a long-negotiated military-logistics pact. The combined geostrategic impact of these three moves suggest that Russia might have just tacitly “abandoned” its “balancing” act between China and India after visibly tilting closer towards the South Asian state, though that doesn’t mean that the Eurasian Great Power is interested in “containing” the People’s Republic.

Before diving into an analysis of these developments, the necessary backdrop must first be established. Russia is currently in the process of “recalibrating” all of its foreign partnerships in light of the full-spectrum paradigm-changing processes unleashed by the world’s uncoordinated attempts to contain COVID-19 that the author collectively describes as World War C. This has resulted in Russia seemingly backtracking on BRI in parallel with considering the possibility of jointly leading a new Non-Aligned Movement with India like the author wrote about in his co-authored academic article that was published a few months ago in the official journal of the Moscow State Institute of International Relations (MGIMO, which is run by the Russian Foreign Ministry). Intensified pressure in recent weeks along Russia’s western flank due to the Hybrid War on Belarus and the way in which the Navalny incident is being exploited to obstruct the completion of Nord Stream II compel Moscow to turn eastward in response, though embracing New Delhi in order to avoid overdependence on Beijing.

Having established the proper background context, it’s now time to analyze what one of Russia’s top diplomats in India just revealed to the world earlier this week. Prior to Babushkin confirming the pertinent news about Pakistan, the author analyzed the possible implications of that earlier reported decision in his piece about how “It Would Be A Big Deal If Russia Promised India Not To Sell Arms To Pakistan”. The main idea is that doing so out of respect for India’s security interests while still continuing to sell arms to New Delhi despite China’s similar interests vis-a-vis the South Asian state considering the context of their latest tensions would send the message to Beijing that its neighboring rival’s security interests are more important to Moscow than the People’s Republic’s. This could in turn inadvertently trigger a “strategic dilemma” whereby China begins to view all Russian moves towards India with suspicion even if Beijing and Moscow remain close partners in a variety of other spheres for pragmatic reasons owing to the convergence of their related interests.

Read more: Indo-China crisis: Russia treading on a dangerous path of satisfying adversaries in the conflict

Heightening possible Chinese concerns was Babushkin’s approval of India’s membership in the Quad, which Beijing suspects is the core of a forthcoming “Asian NATO” intended to “contain” it. Russia respects all countries’ sovereign decisions to join whatever regional grouping that they wish so long as such blocs are inclusive and not aimed against any third party. Even so, Russia knows very well what the Quad’s obvious purpose is yet still felt compelled not to criticize India’s participation in it. It can’t be known for sure, but Moscow’s strategic calculation might be that it fears “pushing New Delhi away” if it too loudly voices its reservations about this network’s anti-Chinese modus operandi, worried as it may be that India might not go through with the entirety of its $15 billion defense order backlog if it feels that Russia doesn’t understand its “legitimate security needs” vis-a-vis the People’s Republic. This hypothesis complements Russia’s decision not to sell arms to Pakistan and also paves the way for clinching its long-negotiated military-logistics pact with India.

The conclusion of a deal along the lines of the “Logistics Exchange Memorandum Of Agreement” (LEMOA) that the South Asian state already has with the US could lead to Russian logistics pacts with other littoral states like the author wrote in December 2018, but he also analyzed in September 2019 that it would “strengthen [the Indian Navy’s] presence in the South China Sea and also set the precedent for expanding its naval influence along China’s eastern coast” as warships traverse those waters to and fro Vladivostok for “friendly visits”. Truth be told, India’s similar pacts with South Korea and most recently Japan will already enable it to do so without needing a LEMOA with Russia, but including Moscow in this regional security matrix could be the “cherry” on top of New Delhi’s grand strategic designs there. In addition, Russia’s “passive facilitation” of India’s Quad-related plans in Northeast Asia (as well as Southeast Asia considering the fact that it’ll have to transit through there to reach Vladivostok) could help revive Moscow’s hoped-for “New Detente” with the West.

Individually, each of the previously described moves might not amount to much, but these three interconnected policy declarations stand to disrupt Russia’s carefully crafted “balancing” act between India and China in favor of the former at the latter’s perceived (key word) expense when taken altogether. The whole is therefore much greater than the sum of all its parts, which could prove to be problematic if it unwittingly triggers the warned-about “strategic dilemma” with the People’s Republic. It was with this general idea in mind that the author wrote last November that “Improved Russian-Indian Ties Must Be Balanced With Improved Russian-Chinese Ones”, suggesting that the improvement of Russian-Pakistani relations (elaborated upon at length here and here, and discussed between both countries’ Foreign Ministers on Thursday) could provide a partial solution seeing as how Islamabad is Beijing’s closest partner and Moscow’s growing closeness to the former could reassure the latter of its non-hostile intentions vis-a-vis its latest moves with New Delhi.

To be absolutely clear, Russia doesn’t intend to “contain” China like India and its Quad allies do, but Moscow is nevertheless “passively facilitating” New Delhi’s vanguard role in this respect in order to leverage this for the purpose of “restoring equality” in its strategic relations with Beijing which could in turn help revive its stalled “New Detente” with the West as well. While understandably concerning to some, Russia’s moves aren’t “anti-Chinese” because they haven’t come at the expense of its existing cooperation with the People’s Republic across a wide array of spheres as the two still closely cooperate on many matters of strategic importance. Rather than “abandoning” its “balancing” act between China and India, Russia is actually in the midst of “recalibrating” it. This has led to Russia reconsidering its relationship with BRI, strengthening military ties with India, and pursuing a closer partnership with Pakistan in order to reassure China of its non-hostile intentions. Taken together, these “recalibrations” stand to greatly shape the course of 21st-century geopolitics.

A Nation oblivious to manifestos

After Bin Laden’s niece, Trump gets endorsement from Taliban