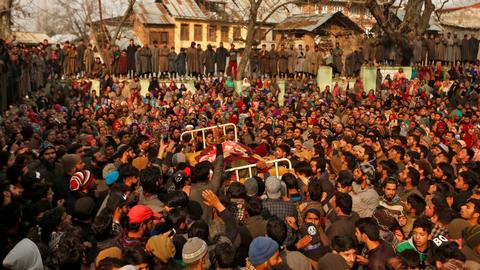 There are conflicting reports that Daesh has carried out its first attack in Indian-controlled Kashmir. The terrorist organization claimed responsibility for a deadly incident in Zakura late last week, but while the Indian police said that they took note of this and also alleged that the body of a dead Kashmiri fighter was draped in the Daesh flag during his funeral ceremony, they ruled out the group’s presence in the restive region.

Be that as it may, some regional voices have feared that Daesh might eventually make an appearance here sooner or later, though with Indians and Pakistanis having different reasons for expecting this. New Delhi has attempted to craft the perception that all acts of violence in the valley are unprovoked terrorist attacks carried out by Muslim extremists, which could naturally attract Daesh’s involvement after some time.

Unleashing the estimated 750,000-1 million troops in the region in an all-out military campaign reminiscent of their new military-strategic ally “Israel’s” 2006 operation against Hezbollah

Islamabad, however, asserts that the Kashmiris are waging a just struggle in order to defend their human rights and hold a self-determination plebiscite that the UN Security Council had previously mandated for the region around the time of the international body’s original formation, with Pakistanis fearing that any real or fabricated Daesh involvement would discredit the Kashmiris’ cause.

Kashmir has experienced a spike in violence over the past year as security forces controversially began to use pellet guns against the population, which has resulted in hundreds of cases of blindness and ever-rising discontent against India’s already contentious presence in this disputed territory.

The killing of Burhan Wani in the summer of 2016 sparked a new wave of unrest which served as a pressure valve for expressing Kashmiris’ anger at what most of them believe to be the systemic human rights violations purportedly carried out with disturbing frequency by Indian troops and New Delhi’s supposedly unstated policy of changing the region’s demographics through what Ivy League researcher Kelly M. Greenhill’s model might characterize as “Weapons of Mass Migration”.

Whether Daesh’s reported presence in Kashmir – if it is indeed true – is due to some kind of physical spillover effect from the group’s eastern Afghan stronghold in Nangarhar Province or if its online propagandists have succeeded in cultivating some local sympathizers, some people are very concerned that this could cynically be exploited as a convenient excuse to discredit the population’s self-determination movement and continue with India’s alleged human rights violations under the guise of waging a “War on Terror”.

Read more: The “South Yemenis” are trying to repeat the Kurdish scenario

Should this scenario transpire, and it’s veritably possible because Daesh is clearly setting its sights on this region given its recent claim of responsibility for the incident in Zakura, then it would expectedly generate substantial US support because of its superficially anti-Daesh pretext.

Reframing the decades-long Kashmiri self-determination struggle as a “terrorist insurgency” could be a Machiavellian ploy by India’s ruling Hindutva hardliners to establish an “acceptable justification” for unleashing the estimated 750,000-1 million troops in the region in an all-out military campaign reminiscent of their new military-strategic ally “Israel’s” 2006 operation against Hezbollah, with New Delhi quite possibly experiencing the same ultimate lack of success as Tel Aviv did during that time.