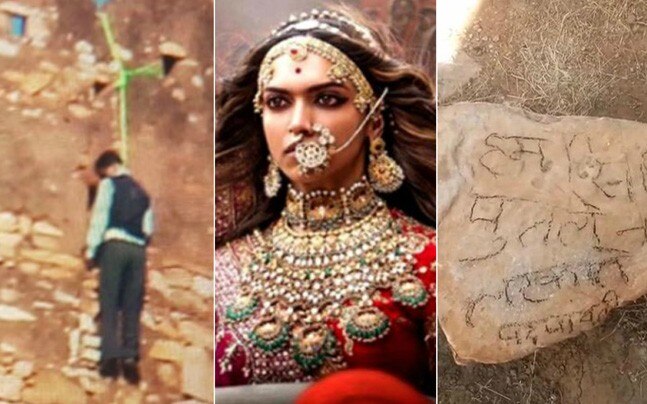 The protests against Padmavati have turned murkier after a body was found hanging in the Fort of Nahargarho, situated near 20 Kilometers of Jaipur, along with threatening messages.

1st ON CNN-NEWS18 | This has gone way too far. Somebody else taking advantage of the situation: Vaibhav Agarwal, BJP #PadmavatiTurnsDeadly pic.twitter.com/myNVfObAcN

Police authorities have commenced investigations while Karni Army has condemned the incident saying that they have nothing to do with this.

Police says the reason for death can only be determined after the investigation since it would be too early to determine it as a murder or suicide.

Last week producers of Padmavati announced that they have voluntarily deferred the release of ‘Padmavati.

In a Tweet, Viacom18 Motion Pictures informed anxious onlookers about the postponement. The movie was scheduled to release on Dec 1st, 2017.

Leaders from Rajput Karni Sena and other Hindutva groups have been alleging that the movie contains romantic and objectionable scenes between revered Rajput Queen Padmavati and Muslim ruler Alauddin Khilji.

The infuriated groups demanded the producer to remove those scenes before the release. They first issued threats to burn the cinemas that displayed the movie. This was followed by threats that were issued to the cast and crew. The aggressors have now threatened to chop off Deepika Padukone’s nose for disgracing women.

The group held protests in several states including Rajasthan, Uttar Pradesh, and Haryana. These states are ruled by Hindu Nationalist ‘Bharti Janata Party’.

A regional leader from BJP announced the reward money of $1.5 million for anyone beheading Bhansali and Padukone.

Protestors earlier called to block Chittor Fort on Dec 1st but then withdrew from their plan after the release was deferred.

Historians and the general public have claimed the controversy around the movie is baseless and absurd.