Deepika’s ‘Ghoomar’ is an enthralling introduction to legendary tale 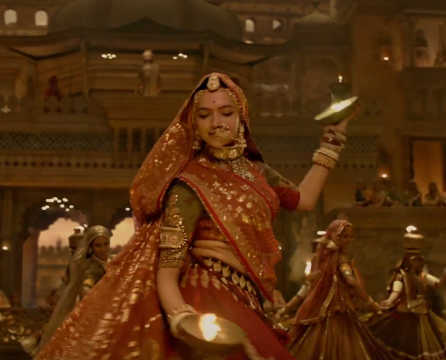 A lady of grace, Deepika Padukone, shined exquisitely as a Rajput Queen in the song “Ghoomar” from her much-hyped movie “Padmavati”.

With her charismatic performance, the versatile actor did justice to Bhansali’s decision of her selection for the titular role in the movie. She has once again appeased the hearts of millions of her fans and followers.

Padukone has demonstrated much-needed aura as a Queen ‘Padmavati’ in the song, with her flawless and intricate moves, she has successfully recreated the ambiance of the then Rajput era.

In the recent past of the Bollywood, other than Deepika Padukone, Aishwarya Rai Bachchan has been another actress who shined equally in the role of an empress “Jodha Bai” in her movie “Jodha Akbar”.

A source from Sanjay Leela Bhansali productions says, “We wanted to retain the absolute authenticity of the Jhoomar. Deepika had to perform the subtle and intricate dance form not the way it is shown in our films but the way royalty performs it.”

“In addition to the routine choreographers we got Jyothi Tommaar a true and disciplined exponent of the Jhoomar who has taught the dance form to the Rajmata of Kishangarh.”

Deepika spent 12 days rehearsing for the song and four days actually performing it on camera, along with 60 chorus dancers.

Movie director Bhansali says, “We wanted the ‘Ghoomar’ to retain its purity since this was being performed by Rani Padmavati. Every step and every move in the dance form celebrates the royal grace of royalty. This is our dance tribute to the brave Rajput women of Rajasthan.”

Read more: Why ‘Padmavati’ is facing opposition from Rajput Community?

Previously viewers were electrified by the stunning avatar of the trio, Shahid Kapoor, Deepika Padukone, and Ranveer Kapoor in the trailer released earlier this month. The trio is all set to appear in Sanjay Leela Bhansali’s upcoming movie, ‘Padmavati’.

The movie is based on the tale of lust and valor between Rani Padmini of Rajput dynasty and Sultan Alauddin Khilji, who was the second and most powerful ruler of Khilji dynasty of Delhi Sultanate. Khilji’s portrayal in the movie is barbaric, blood-thirsty and an uncivilized ruler.

Read more: Deepika Padukone is not ashamed to talk about her depression

The trailer depicted a furious nerve-wrecking fight between the Rajput warrior (Shahid Kapoor) as ‘Maharawal Ratan Singh” and Ranveer Singh as “Alauddin Khilji”.

The movie trailer took the internet by storm and broke all records of getting the fastest views on Youtube for any of Hindi movie trailer.

What Pakistan needs to develop its mining sector